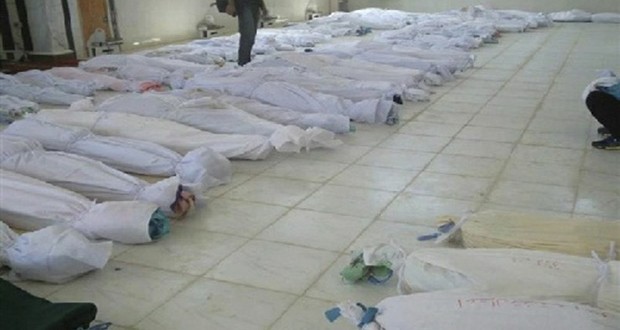 The Recent Massacre in Houla, Syria

When rockets resembling mere fireworks are fired by Gazans to defend themselves against Israeli brutality, the Security Council at the UN holds a meeting to condemn the illegitimate attack on ‘innocent’ Israel and calls for more sanctions against 1.5 million Palestinians imprisoned in Gaza trip. The United Nations and the international community supported East Timor in its bid to secede and exercised all types of pressure on Indonesian government until they accepted a referendum on the future of East Timor in 1999. Shortly after, they secured an easy independence, especially for a small region with one of the poorest economies in the world.

On Saturday 26th May, the Syrian regime having already killed over 10000 people carried out one of its worst massacres in Houla, north of the city of Homs. Around one hundred people were slaughtered in the early morning. Most of them were children under the age of 12 whilst most of the rest were women.

“On a bedroom floor dozens of little children lie dead, their arms and legs strewn over one another. Many of their eyes are still open, bearing a look of shock and fright. They are all covered with blood and obviously suffered terrible deaths. A girl, who is perhaps seven years old, wearing a headscarf and pink diamante belt, lies face to face in death with a much younger boy. Another little boy in a yellow jumper lies with his arms stretched out, almost cradling the head of the girl next to him. Blood covers both their faces and soaks their hair.”

Many reports confirm that this massacre was carried out by a group of men using knifes and swords who entered the city at a point when most of its inhabitants were hiding from airstrikes. According to BBC website, ‘Horrific video footage has emerged from Houla of dozens of dead children, covered in blood, their arms and legs strewn over one another. It is unverified, but BBC correspondent says such images would be difficult to fake.’

Just miles away UN observers were interviewing Syrians on film recording what is happening in Syria – and they’re still not sure as to what has occurred in the last year! Are they still unsure as to who is killing women and children and using airstrikes to destroy buildings over the heads of its inhabitants?

UN leader Ban Ki-moon and UN-Arab League peace envoy Kofi Annan have condemned the massacre and described it as an “appalling and brutal” breach of international law. However, one would feel nauseas upon reading the statement issued on behalf of the UN secretary-general and the Syria envoy, “This appalling and brutal crime, involving indiscriminate and disproportionate use of force, is a flagrant violation of international law and of the commitments of the Syrian government to cease the use of heavy weapons in population centres and violence in all its forms”. They still have hope in the Syrian government, affording it legitimacy, and waiting for it to fulfil its promises. In fact, this massacre was a gift handed by Assad to Mr Ban Ki-moon and Mr Kofi for their efforts in allowing him more time to kill the ‘terrorists’ who revolted against his regime.

In fact, the leader of the United Nations, Mr Ban Ki-moon, still has no shame to refer to the killing carried out by the Assad and his militias as conflict within Syria. What hurts more is to see some Arab news outlets also referring to it as internal conflict. While the Arabic channel Al Jazeera is trying to show some sympathy towards the cause of Syrian people to liberate themselves from oppression and the Assad dictatorship, the English Al Jazeera channel has focused on other things that attract an English audience. On presenting the crisis, it presents it as a war within Syria.

Having mentioned all of these problems, I am glad that the Muslim Ummah is willing to pay a high price for its freedom and has never, and will never, give up insha’Allah. Our Ummah has been asleep for a long period of time but the time to wake up has come. Whatever price is paid, it is worth it.

“Beautified for those who disbelieve is the life of this world, and they ridicule those who believe. But those who fear Allah are above them on the Day of Resurrection. And Allah gives provision to whom He wills without account. Mankind was one religion; Allah sent the prophets as bringers of good tidings and warners and sent down with them the Scripture in truth to judge between the people concerning that in which they differed. And none differed over the Scripture except those who were given it – after the clear proofs came to them – out of jealous animosity among themselves. And Allah guided those who believed to the truth concerning that over which they had differed, by His permission. And Allah guides whom He wills to a straight path. Or do you think that you will enter Paradise while such [trial] has not yet come to you as came to those who passed on before you? They were touched by poverty and hardship and were shaken until [even their] messenger and those who believed with him said, “When is the help of Allah?” Unquestionably, the help of Allah is near. They ask you what they should spend. Say, “Whatever you spend of good is [to be] for parents and relatives and orphans and the needy and the traveler. And whatever you do of good – indeed, Allah is Knowing of it. ” Fighting has been enjoined upon you while it is hateful to you. But perhaps you hate a thing and it is good for you; and perhaps you love a thing and it is bad for you. And Allah Knows, while you know not

Sources:www.islam21c.com
Islam21c requests all the readers of this article, and others, to share it on your facebook, twitter, and other platforms to further spread our efforts.