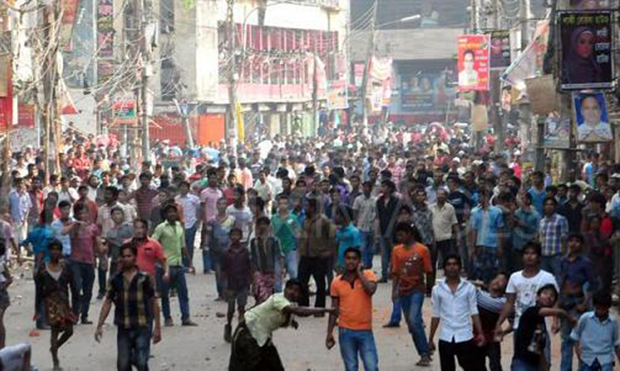 All praise is for Allah who has sent His Messenger with knowledge and guidance and the true religion so that it may be dominant over all others. We testify that none has the right to be worshipped but Allah alone and that Muhammad is His servant and Messenger. We ask Allah to praise and grant peace upon the Messenger, his family and followers.

Not content with eliminating the Islamic leaders of Bangladesh, Awami League has let loose its foot soldiers to kill, injure and beat as many innocent civilians unfortunate enough to cross their path.

Police have been using everything at their disposal including live bullets against protestors.[1]

More than 70 people have been killed but it is difficult to know the real number as no doubt the police will be keen to hide the true figures. The death toll will continue to rise. If this conflict is truly about bringing justice for Bangladeshis how can it be justified to kill the very same people?
One would expect at least some compassion for those killed from the media but it seems they are partners in crime.  An editorial in one of the daily newspapers had this to say;

‘The nation is shamed, The attacks on members of the minority communities are the most shameful episode amid the current nationwide disturbances.’[2]

It is very commendable to be concerned for the safety of the minority communities. No innocent person should be intentionally targeted. But how about a little sympathy for the victims of police brutality?

The ‘daily sun’ has the tag line ’true and impartial’. In reality it could not be further from the truth. It is completely biased. Much of the print media is a propaganda tool for the Awami League and its allies.
The editor of a daily newspaper how dared to criticise the government does not leave his office for fear of being attacked by the mob or being arrested.
Perhaps Muslims could put some hope in the legal system to restrain police use of violence.  Sadly such hope would also be misplaced. The High Court was also more concerned with protecting the minorities.[3]
If only Muslims in India had such levels of understanding and protection from its institutions. Could this all be related to the state visit by the Indian President Pranab Mukherjee?
He flew in to Bangladesh on Sunday to a red-carpet treatment for a three-day state visit. Perhaps Hasina in her discussions with him could tell him how much her government does to protect the rights of minorities and request that he does the same for the Muslims in India.
No hope of that happening either. She does not just hate Muslims at home she has equal contempt for non Bangladeshi Muslims. You can watch what she had to say about Burmese Muslims fleeing genocide.[4]
While opposition members are brutally treated during protests, Awami League followers continue to fuel the fire and fan the flames of violence under the patronage of the state. The Daily Sun reported under the headline, identify Jamaat-Shibir cadres unleashing violence, Youth protesters urge people;

‘The youth protesters at a rally Sunday called on the countrymen to identify the Jamaat-Shibir cadres who are unleashing violence and launching communal attacks across the country.’

Interestingly, the report reveals the true belief of this crowd.

‘The rally started at 4pm with recitation of holy Quran, Gita and Thripitak and rendering of the national anthem…’[5]

It is not surprising that they started with recitation from Gita and Tripiṭaka because as shown earlier the government, media and  judiciary are all concerned with protecting minority rights and what greater way to show them affinity than to start a rally against Muslims by reading from their  books. However, the Quran was included just to make it appear they are not exclusive.
Far from being a peace loving, non violent movement as they would like the world to believe they are a blood thirsty and vicious mob. These are some of their demands.[6]
They have insulted Allah and said the vilest words about the Messenger of Allah (sallallah alaihi wa sallam). It is only a matter of time when Allah’s justice will be done.

وَلَا تَحْسَبَنَّ اللَّهَ غَافِلًا عَمَّا يَعْمَلُ الظَّالِمُونَ إِنَّمَا يُؤَخِّرُهُمْ لِيَوْمٍ تَشْخَصُ فِيهِ الْأَبْصَارُ
Consider not that Allah is unaware of that which the Zalimun (polytheists, wrong-doers, etc.) do, but He gives them respite up to a Day when the eyes will stare in horror. [7]
إِنَّا كَفَيْنَاكَ الْمُسْتَهْزِئِينَ
Indeed! We will suffice you (Muhammad) against the scoffers.[8]
They have violated the sanctity of a Muslim. The life of a Muslim is more sacred than the Ka’bah.
وَمَنْ يَقْتُلْ مُؤْمِنًا مُتَعَمِّدًا فَجَزَاؤُهُ جَهَنَّمُ خَالِدًا فِيهَا وَغَضِبَ اللَّهُ عَلَيْهِ وَلَعَنَهُ وَأَعَدَّ لَهُ عَذَابًا عَظِيمًا
And whoever kills a believer intentionally, his recompense is Hell to abide therein, and the Wrath and the Curse of Allah are upon him, and a great punishment is prepared for him. [9]