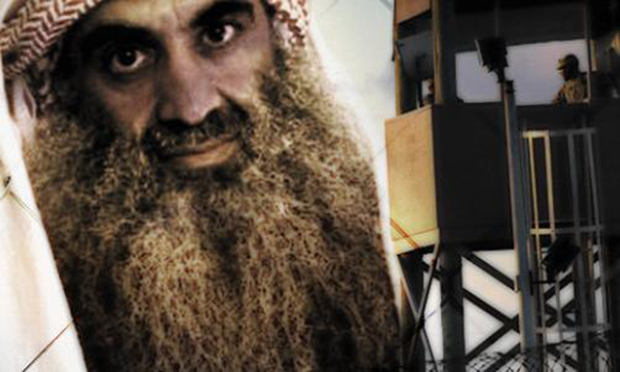 [Shylock, The Merchant of Venice]
It is difficult to sympathise with Shylock, the villain of Shakespeare’s Merchant of Venice. Throughout the play he is vilified, humiliated and made the subject of intense disparaging stereotypes. Yet, there comes a moment, when all must pay homage to his humanity. The speech quoted above, is a glimpse of the human, despite all the demonisation that takes place before and indeed after. Khalid Shaikh Muhammad reminded me of this moment, last October, when he spoke before Judge Pohl at the Military Commissions court at Camp Justice, Guantanamo Bay,

“Yes. In the name of God, Most Graceful, the government at the end of the argument gave you advice. They told you any decision you’re going to issue you have to keep in mind the national security and to remember that there were 3,000 people killed on September 11. And I would like to give you a similar advice.Any decision you will take, you have to keep in mind that the government is using the definition of national security as it chooses. And this expression has a definition in the Military Commission’s Rules.

When the government feels sad for the death or killing of 3,000 people who were killed on September 11, we also should feel sorry that the American government, who is represented by General Martins and others, have killed thousands of people-millions.

This definition is a resilient definition, lasting. Every dictator can put on this definition as their shoes, as he chooses to step on every definition in this world, every person, and every Constitution.

My only advice to you, that you do not get affected by the crocodile tears. Because your blood is not made of gold and ours is made out of water. We are all human beings. Thank you.”

There is a poetic resonance that rings through the speeches, one fictional and one real. They both seek to understand the world through not only their own hurt, but the hurt of others. Muhammad, in many ways, epitomises the essence of Shylock’s presentation to the court, by basically finding common ground between them in pain and suffering, he reminds us all, that there are many layers to these legal proceedings which fail to tackle the wider issues of suffering, abuse and identity.
As the Commissions process goes through its pre-trial hearings, there are strong questions left as to the extent to which the process is about justice, as much as it is about revenge. There are real issues in relation to the ability of his legal team to be able to represent this case, indeed, the barriers to his representation very much indicate the desire of the US government to ensure they are able to execute him. However, as much as the media have been reporting on the case, they have also been commenting on the individual.
In the series of hearings in October and those taking place now, there has been much comment on the dyeing of Muhammad’s beard red, as per the practice of many Muslims the world over. Even after the maelstrom in October 2012 of how or why Muhammad could have dyed his beard, commentators and journalists cannot help but note about him, “whose beard was dyed red…” as if it were a consistent suffix to his name. Some examples from pieces written on 28 January 2013 include:

In a piece by Carol Rosenberg late last year, she quoted the author of The Hunt for KSM, Terry McDermott, as claiming that the use of red dye reflected a certain narcissism and that, “It’s all vanity.” What McDermott failed to recognise, was the history of culture and religion that serves as a backdrop to Muhammad’s decision. Indeed, there are certain parts of the Muslim world, including Balochistan (from where Muhammad hails), that practise the dyeing of the beard routinely. McDermott’s cultural ignorance was best summarised by a lawyer who said to me (sarcastically), “What’s next? Jokes about those funny-looking curly hair bits some Jews display? The hilarious turban Sikhs wear?”
Shakespeare’s Shylock is not unaware of the abuse he receives from Christians due to his outer image, in fact, he recognises the cultural fear and hate that has resulted in his own contempt for the Christians in Venice,

“Signior Antonio, many a time and oft
In the Rialto you have rated me
About my moneys and my usances.
Still have I borne it with a patient shrug
(For suffrance is the badge of all our tribe).
You call me a misbeliever, cutthroat dog,
And spet upon my Jewish gaberdine,
And all for use of that which is mine own.”

As an intense caricature of the ‘other’ – like Shylock – Khalid Shaikh Muhammad stands accused not only of having planned the 9/11 attacks, but also of being a Muslim who has a culturally different practice than what many average Americans may be familiar with. Thus, any external manifestation of his culture or religiosity, is taken as indicative of his status as an individual predisposed to hate. The aspects of the external are highlighted and regurgitated, if only to highlight the stark difference between him and everyone else. In death penalty cases in the US, such processes of demonisation are crucial, as they provide the necessary distance to exact the punishment without fear of sympathy.
Mixed with the external dissimilarities with those who stand to accuse, lie the internal differences of culture and history. The Khalid Shaikh Muhammad that stands before his accusers, is an individual constructed from influences that find their roots in the history of Islam and colonialism, it is impossible to separate that history from the person he is today and the world view he may hold. As Rabbi Lewinthal said of the human cry of Shylock,

“This is the wail of the Jew uttered for the centuries. This is the cry that went up from Egypt, from the Roman amphitheatre, from the dungeons of the Spanish Inquisition. We hear its echo all through the Dark Ages; and the genius of Shakespeare voiced it as it had never been voiced before – or since. … Shylock is a man more sinned against than sinning, whom the inhumanity of the whole world has made inhuman. Long brooding over the shameful treatment of his people has marred his character and dried up the founts of tenderness in his bosom.”[1]

By assessing the ways others have assessed Shylock over the years, we may come to understanding Muhammad, red-dye and all
[donationbanner]
Notes:

Islam21c requests all the readers of this article, and others, to share it on your facebook, twitter, and other platforms to further spread our efforts.
[1] Ididore Lewinthal, Rabbi Congregation Ohavai Sholom, Nashville, Tennessee
Share. Facebook Twitter LinkedIn Email Telegram WhatsApp
Previous ArticleScrutinise the Gay marriage bill
Next Article Proactivity; a figment of the past