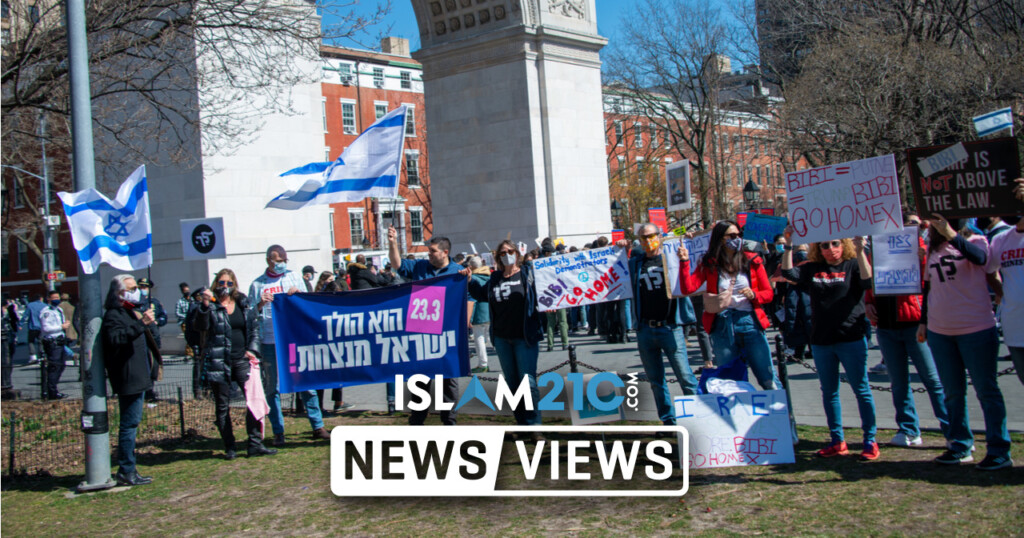 Protests against the Israeli Prime Minister Benjamin Netanyahu have once again picked up, with thousands taking to the streets to call for Israel’s longest serving leader to be removed from office. [1]

People as far as New York City are dissatisfied with Netanyahu, with protesters marching across Washington Square Park on 20th March. [2]

Chants of “Bibi, go home” were heard as tens of thousands rallied outside the home of Netanyahu, who has been Prime Minister of the Zionist state of ‘Israel’ for a total of 15 years. [3]

The PM, who has now been in charge for a record 12 consecutive years, hopes to remain as Israeli leader after imminent upcoming elections on 23rd March – the fourth in the last two years.

🏴🇮🇱 Some 20,000 people at anti-Netanyahu protest in Jerusalem pic.twitter.com/fNuiVSdpU8

Protesters have been calling on Netanyahu to resign or be forcibly removed from office, after a number of perceived failings in leadership, including mismanagement of the state’s initial coronavirus pandemic response, a severely weakened economy, job losses, as well as Case 4000. The latter is the ongoing corruption trial surrounding Netanyahu (and, to a lesser extent, his wife Sara) and his receipt of close to $300,000 worth of gifts, including cigars and champagne, from two businessmen. [4]

Netanyahu also finds himself mired in a number of other criminal cases, being a defendant in Cases 1000 and 2000. In a February court appearance, Netanyahu entered a plea of ‘not guilty’ to the hearing, which was held in regards to three separate cases. [5]

Summary of cases against Netanyahu

Now seen as ironic and hypocritical, Netanyahu was supportive in 2007 of calls for then-Prime Minister Ehud Olmert to resign after being accused of corruption. At the time, Netanyahu suggested that Olmert would be distracted from the position of Prime Minister should he not resign from office.

As Netanyahu said at the time whilst Leader of the Opposition:

Speaking in the Knesset, Netanyahu went further to add:

“Our country needs new leadership … Those who failed at war cannot be those who correct the failures … We have to go back to the people and allow them to express themselves.” [6]

Over a decade later in 2018, after Olmert was released early from jail, he told Netanyahu to resign in order that he save face:

Olmert went on to say:

“He should do the right thing, based on what he and his family and attorneys know about his cases, and do it in a way that will not compromise the dignity of the Prime Minister’s Office and himself as prime minister.” [7]

There have been a number of protests against Netanyahu during the COVID-19 pandemic, with disgruntled Israelis holding weekly rallies for the past nine months. However, due to cold weather, numbers have somewhat dwindled. The protests that occurred yesterday are believed to be the largest in many months. [8]

The 23rd March elections are predicted to again be very tight, with Netanyahu’s Likud party polling strongly despite rival and former Netanyahu chief of staff Naftali Bennett seeking to disrupt the incumbent’s drive for a fifth stint as Prime Minister.

In addition, with the evidence stage of Netanyahu’s corruption trial postponed until April 5th at the earliest – in order to make room for the election – international observers will be closely watching the result as Netanyahu’s rule over the Zionist state has wreaked immense havoc on the occupied Palestinian lands, with a rapid acceleration in settlement building as well as the recently cosy relationship with the former Trump administration in the US leading to the country relocating its embassy to the contentious city of Jerusalem. [9]