Europe’s history of anti-semitism and the rise of Islamophobia 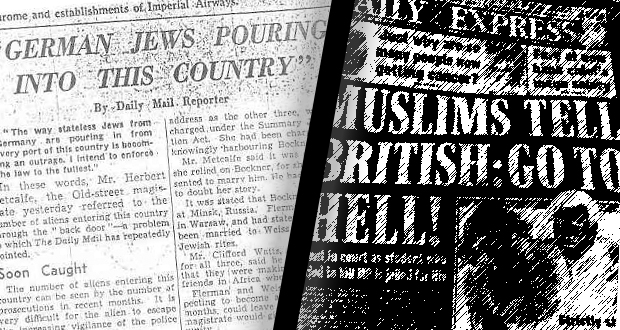 Over the last few months a national anti-racism campaign has been underway led by Muslim organisations in the UK. The main purpose of the campaign was to promote peace and tolerance, by understanding common views about racism in modern British society, and how Muslims could assist in collectively tackling it.

The initiative came at the wake of the controversial German far-right PEGIDA movement’s decision to hold its first UK rally in Newcastle upon Tyne. Muslims across the country were mobilised to oppose PEGIDA’s message of hate with the message of love, and to counter their divisive rhetoric with the message of understanding.

Teams of activists conducted surveys and engaged in dialogue with people of all religious and political persuasions all across the country, to improve their understanding of a topic which continues to affect millions of people today. One of the focuses of the survey was to understand people’s experiences of racism, and to ascertain whether there is a general consensus that is still embedded within British society. The survey went further to understand if the public understood Islamophobia, and whether they perceived it to be a new form of racism in our society. The teams educated the public about the Islamic stance on racism, and raised awareness of Islamophobia, and the dangers it presents to community cohesion.

The scenes of people of all faiths and races getting involved and supporting a Muslim-led campaign showed that the Ummah is more than capable of taking lead in addressing societal problems by providing Islamic solutions. Speaking at the demonstration in Newcastle against PEGIDA, I turned our attention to the political and socioeconomic climate that led to the Holocaust. There are some striking comparisons between Europe’s historical reputation of anti-Semitism and the unprecedented rise of Islamophobia we are seeing today which are worth pondering upon.

Europe’s hatred towards the Jewish community is no distant memory. In fact, many of our grandparents may have been alive to witness the images, or recall hearing the accounts of the atrocities committed against the Jews by the Nazis during World War 2.

The Holocaust was not a spontaneous event, nor was the social attitude that facilitated this horrific genocide exclusive to Germany. Anti-Semitism was widespread across Europe, including Britain, at least a century before WW2. Prior to the Holocaust, there was a popular culture of repugnance against European Jews. They were demonised and perceived with suspicion because they were outwardly different. The men wore kippahs, their hair was curled on the side, and they had long beards. Jewish women also used to dress differently, covering their hair with a headscarf. The Jewish religion and culture was intrinsically different to that of secular Christian Europe. They ate kosher meat, observed the Sabbath, and followed their own personal and family legal code – sound familiar?

The question contemporary European leaders must ask themselves is whether their respective governments are steadily moving towards the same direction with their Muslim minorities, as their predecessors did with the Jews 200 years ago. Is Europe’s increasing intolerance towards Muslims comparable to the initial stage of antagonism towards Jews?

Undoubtedly, there are significant political and socioeconomic differences between the history of Europe’s Jewish and Muslim communities – namely, the former had no state but was granted one after the Holocaust, and the latter was part of a great civilisation and empire, which Europe effectively destroyed and colonised. Nevertheless, it makes no difference to the fact that Muslims have become the new Jews of Europe; and because the question of integration and assimilation is based upon ‘cultural differences’, it is accepted as politically correct.

Usually it is immigrants that are singled out as a socioeconomic threats to European countries, but it is Muslims who symbolise the “suspicious other”. The xenophobic propaganda of Europe’s far right, as well as the ideological rhetoric against normative Islām from conservative, liberal and left-wing parties, has contributed towards creating this environment.

Consequently, Muslims have become Europe’s scapegoats upon whom the continent’s anxieties are vented on. Right-wing politicians continuously exploit these anxieties to advance their neoconservative, nationalist and imperialistic agendas, while most liberals and left-wing parties have jumped on the anti-Muslim bandwagon for political mileage.

Suggesting that Muslims have replaced the Jews of Europe does not imply that a genocide is imminent. Though history does not repeat itself in such a way, it can have a tendency to mimic the past, with all the premature warning signs. As the wider non-Muslim community’s suspicion and distrust of Muslims worsen, it is a fact that the state of Europe’s largest religious minority is facing a real threat, and the possibility of a quasi-inquisition in the future would not be a far-fetched nightmare.

It is imperative that we remind ourselves of that disgraceful period in European history where animosity towards a particular religious minority nearly led to their extermination. Let us not be bystanders in allowing history to repeat itself by remaining silent to the hatred and bigotry against, not only the Muslim community, but any particular community.