When I Met the Family of Ahed Tamimi 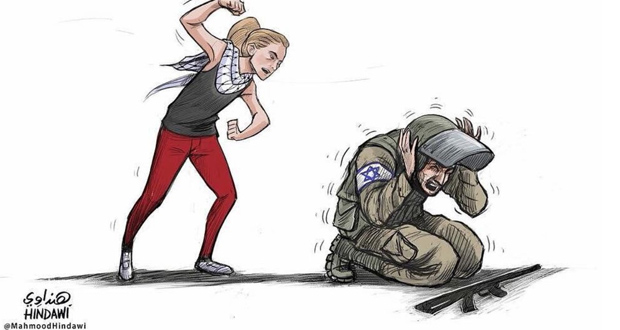 My experience of the Tamimi family

We have all been reading about the young brave symbol of resistance against the brute of the occupying Israeli forces, Ahed Tammi, a 16-year-old Palestinian girl who was recently arrested for allegedly assaulting an occupying armed Israeli soldier after her 14-year-old cousin was shot in the head.

I was blessed and honoured to have met the family of Ahed on my visit to Palestine in 2013.

The Tamimi family live in An-Nabi Saleh, which is not too far from Ramallah. The name of the town is taken after the name of Prophet Sāliḥ (ʿalayhi al-Salām) who is thought to have been from there. This is a town where settlers moved in soon after the occupation. However, as evidenced all over Palestine, the situation of the Palestinians in An-Nabi Saleh began to worsen. As is often the case with the occupier, not content on settling and misappropriating land and homes but determined to occupy every place, in July 2008 Israeli settlers from nearby began to use the Qaws spring on An-Nabi Saleh land to irrigate crops there. In February 2009 settlers built structures on the spring site. The Palestinians complained that settlers were building on private Palestinian land and that the work damaged other property including trees. However, the occupiers took no action. The Palestinians from An-Nabi Saleh are now not allowed, or at times restricted, from going to and using the spring by the occupying Israeli army whilst the settlers were – and continue to be – permitted unfettered access.

As a result of this, in December 2009 the first demonstrations from the village began and they have lasted since. Every Friday, straight after the jummʿah prayer (Friday congregational prayer) the villagers come out to protest the illegal and unjust theft of their land and resources. This act is reminiscent of the advice given to the great Muslim leader of the Seljuks, Sultan Alp Arslan, when meeting the Byzantine army at the battle of Manzikert. He was advised by the Imām and Scholar of the army, Abū Nasr Muḥammad b. ʿAbdul Mālik as follows:

“You are fighting for a dīn which Allāh promised to support and to make it prevail over all others. I trust that Allāh will have put this victory down to your name. Confront them on Friday in the afternoon, at the hour when the preachers will be in the pulpits. They will be praying for victory of the mujāhidīn – and prayer is linked to a favourable response.”[1]

Like Sultan Alp Arslan, the Palestinians of An-Nabi Saleh have internalised the importance of the spiritual dimension of the struggle by linking the protests with the day of Friday, from which they gather their strength.

I was there on one such Friday when, after the Jummʿah Prayer, people assembled outside the Mosque. The elders from the community, led by the Tamimi family, reminded people about the importance of their struggle, the peaceful protest, the duty to be firm and cautious, to look out for one another and above all, the purpose of resisting against the occupying forces and their oppressive rule. Families then embraced one another saying what could be their final farewells. Every week, the Palestinians are joined by peace activists from around the western world who accompany the Palestinians to their weekly protests down to the spring which is heavily fortified by the occupying Israeli army.

The town effectively transforms into a war zone every Friday. Protestors are repeatedly met with unnecessary and excessive force by the occupying Israeli army including the use of stun grenades, pepper spray, batons, multiple rounds of tear gas and guns. Demonstrations are dispersed as soon as they begin and are usually not allowed to reach the spring. The Israeli army raids the village regularly, usually during the night, and conducts house searches and arrests, including the arrest of children under the age of 15.

Many have been killed during these protests, including members from the Tamimi family. Ahed’s father, Bassam, has been arrested many times.

Before the Jummʿah Prayer during my visit, the Tamimi family invited all activists who had come from various different parts of the world to their home as part of the hospitality which is a great Islamic custom and tradition. During this visit, they told us of events that had unfolded in previous protests stating that they would, at times, leave women, children and the elderly together in a house or two and, despite knowing that to be the case, it was these very houses that the occupying Israeli army would target with tear gas canisters. They informed us that on one occasion, the Israeli army attacked a house which was set alight such that a mother had to throw her child out of the window to the people below in order to save her. They informed us that the child in question would not speak to her mum for nearly a year after the incident; she believed her mum had no care for her and could not understand her mum was, in fact, trying to save her life by throwing her out of the window. This incident alone tells of the psychological trauma inflicted on the Palestinians, both young and old. The occupying forces have also been known to use skunk trucks with cannons spraying skunk liquid into houses and over entire towns. The skunk water has a very strong odour and its use is indiscriminate as a means of collective punishment. The Palestinians also showed us how they have collected many of the tear gas canisters, turning them into fences around the village (an indication as to just how many canisters are fired by the occupation forces).

Ahed, her family and those who continue to resist the oppressive occupiers are a source of inspiration and hope to us all. Ahed’s recent response to the judge to release her from her handcuffs so that she could show him how she slapped the solider when asked to show him how she had committed such an act, shows us that there is much hope in this younger generation, a fearless generation, the generation of liberation, inshāAllāh. Ahed’s bravery in the face of a tyrannical, oppressive ruler reminds us of the courage and leadership shown by the young in the story of the Boy and the King.[2]

When considering the situation before us, the name of this town is of particular interest. Sālīḥ (ʿalayhi al-Salām) was sent to the people Thamūd. The people of Sālīḥ (ʿalayhi al-Salām) asked for clear proof from Allāh in return for their belief in Him their promise not to associate partners with Him. In line with their request, a miraculous she-camel appeared out of the mountains. The people were informed that they must not harm the she-camel and to allow her to freely graze in the land. The she-camel was a blessing and a means of sustenance whose milk was said to be sufficient for all the people in the town. However, the evil doers and disbelievers began complaining that this huge she-camel with its unusual qualities drank most of the water from the well and frightened their cattle. They therefore hatched a plan to kill her. These evil ones killed the she-camel because they did not want to share the water just as the occupying settlers do not share the spring with the Palestinians. What, then, was the end of Sāliḥ’s (ʿalayhi al-Salām) people?

“So they plotted a plot, and We planned a plan, while they perceived not. Then see how was the end of their plot! Verily! We destroyed them and their nation, all together. These are their houses in utter ruin, for they did wrong. Verily, in this is indeed an Āyah (a lesson or a sign) for people who know. We saved those who believed, and used to fear and obey Allāh.”[3]

May Allāh save the believers in An-Nabi Saleh and the surrounding areas today, as He did before from their oppressive rulers.

Why does Israel arrest minors…?

The answer to this is that it fears not their physical ability to challenge the occupation, but the spirit of their resistance and resolve. It is an outcome of the tarbiyah (nurturing, cultivation) of their parents and their societies. The likes of Ahed did not emerge from a vacuum but through years and years of nourishment upon the love of al Aqsa, confidence, inner victory (the opposite to inner defeatism) and the will to sacrifice their lives for a greater cause.

A point of action for us is to teach our children that there are more worthy pursuits than temporarily satisfying their individual wants with the distractions that are advertised to them. In societies built around disempowering, exploiting and diverting people away from wisdom, the work upon us in the realm of tarbiyah is even greater.