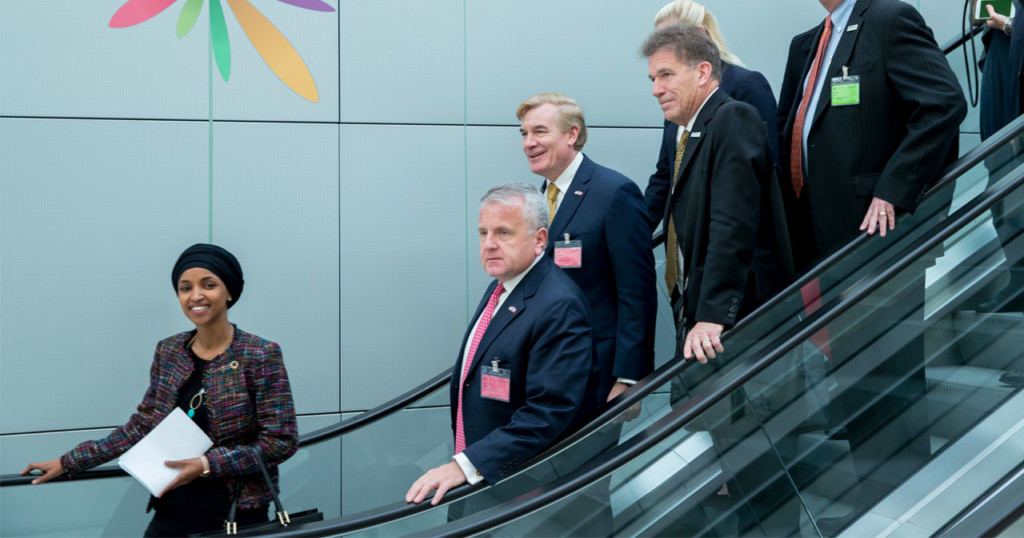 Since the early days of her election victory in November 2018, Minnesota’s recently-elected Congresswoman, Ms. Ilhan Omar, has been under constant attack. The Somali-born refugee and hijab-wearing politician has become known for her outspoken approach in speaking up against matters she feels are unjust, including Israeli occupation and Zionist lobbying in the US, as well as the US-led coup attempt in Venezuela, and most recently, the erosion of civil liberties faced by Muslims following 9/11.

Speaking at an event held by the civil rights group, Council of American-Islamic Relations (CAIR) on 23rd March, just over a week after the tragic and hate-filled New Zealand shootings, Ms. Omar touched on many issues that affected the Muslim community, and the consequences of Islamophobia. During this speech, she mentioned:

“Here’s the truth. For far too long we have lived with the discomfort of being a second-class citizen and, frankly, I’m tired of it, and every single Muslim in this country should be tired of it. CAIR was founded after 9/11 because they recognized that some people did something and that all of us were starting to lose access to our civil liberties.”[1]

Her point was clearly that the actions of a few have unjustly led to mass curtailment of the rights of an entire community. This point was well-understood at the time, yet many weeks later, a Republican Congressman shared a clip of the above quote and implied that Ms Omar had belittled the 9/11 attack by using the words “some people did something”.[2] The underlying current of Islamophobia in both US media and politics was ignited in no time.

Fox News, along with several other right-wing media outlets, began to comment and scrutinize her words, continuing to misrepresent what was actually said and present her as anti-American, leading to US president Trump joining in by tweeting a clip of the now-famous words “some people did something” being repeated several times over with footage of the 9/11 attacks in between each instance and said “WE WILL NEVER FORGET!”.[3] Likewise, Murdoch-owned newspapers, including the New York Post, carried front-page images of the twin-towers attack, condemning Ms. Omar for seemingly downplaying the attacks.

Since then, the politician has been under a continuous onslaught of media attacks, and many prominent voices within her own party have shown reluctance to outwardly condemn the hysteria and character assassination attempts, proving the very points she made during her speech – and showing that the disease of Islamophobia is certainly not limited to the right-wing, but is rather quite mainstream.

Social media was alight with views calling for a wide of variety of measures against her, such as incarceration in Guantanamo Bay, deportation, and even murder.[4] So far, one man has already been charged with threating her life.[5] Ms. Omar released a statement on Sunday evening:

“Since the President’s tweet Friday evening, I have experienced an increase in direct threats on my life — many directly referencing or replying to the President’s video. I thank the Capitol Police, the FBI, the House Sergeant at Arms, and the Speaker of the House for their attention to these threats.

Violent crimes and other acts of hate by right-wing extremists and white nationalists are on the rise in this country and around the world. We can no longer ignore that they are being encouraged by the occupant of the highest office in the land.”

Violent rhetoric and all forms of hate speech have no place in our society, much less from our country’s Commander in Chief. We are all Americans. This is endangering lives. It has to stop.”[6]

One commentator, Professor Todd Green, commented regarding the fallout:

The manufactured controversy surrounding @IlhanMN's 9/11 remarks is predicated on the Islamophobic belief that Muslims "by nature" harbor terrorist and violent sympathies and are therefore complicit in the 9/11 attacks. This is the most basic definition of bigotry. #Islamophobia https://t.co/iwN1K8rvOR

Senior Democrats such as Nancy Pelosi[7], and presidential candidate Kirsten Gillibrand[8], both condemned President Trump for his incitement – his tweet was pinned to the top of his account for a number of days – whilst treading cautiously to avoid supposedly supporting the Muslim Congresswoman; a point not lost on Muslims unfortunately. Speaking of the Democratic Party’s own Islamophobia in the matter, Professor Todd Green also tweeted:

The Democratic Party has internalized #Islamophobia to the point that some of its presidential candidates are attempting to "both sides" their response to Trump's racist tweet against Ilhan Omar. The party is struggling to find its voice & courage in the face of Islamophobia. pic.twitter.com/1dPzjUtHcq

Whilst the rage continues, the valid issue highlighted by Congresswoman Ilhan Omar in her speech has ironically not only been overlooked, but also played out in full display for all to see. However, only a few take notice, whilst the majority are blinded by their own internalised Islamophobia. The manufactured controversy is a clear message that “Americans who are Muslim — or who are perceived to be Muslim — are constantly engaged in a battle to maintain their constitutionally guaranteed civil liberties”.[9]

The US has had no shortage of institutionalised Islamophobia post-9/11, with the operation of Guantanamo Bay, legislating spying on communities, entrapment, and many other clear cases of inequality and racism towards Muslim communities.[10] There, and across the pond in Europe, Muslims face the same struggle against state, politicians, and media alike in having to prove their loyalty and humanity. The lessons of this constant “otherisation”, for which we unfortunately witnessed its consequence in New Zealand just five weeks ago, seem to have already been forgotten.