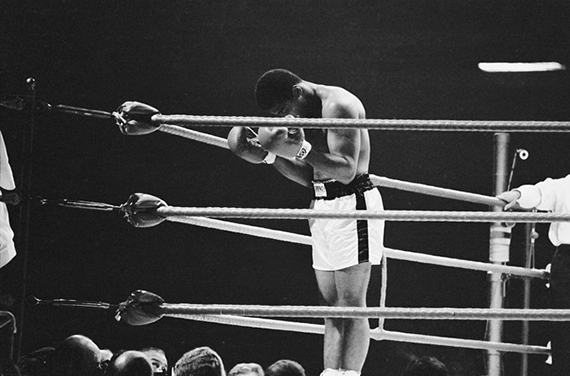 To Allāh we certainly belong, and certainly to Him is our return.

It is with a heavy heart we announce the passing away of the beloved former heavyweight boxing champion, Muhammad Ali (rahimahullāh) at the age of 74.

Anyone who ever heard of him knew he was far more than just a boxer, but a cultural icon for Muslims in the last century. Through his career not only in boxing but his anti-war and civil rights activism, he became more than just a black Muslim celebrity: what Professor Sherman Jackson called recently in an interview, a cultural authority. His achievements, rahimahullāh, not only helped make the ‘Muslim’ and ‘Islam’ normalised in the western psyche (long before the recent manufactured surge in Islamophobia), but he gave millions of Muslims all over the world pride to see a Muslim celebrity who was not afraid to speak out for Islām and Muslims, rather who felt completely comfortable—dare we say proud—in his Muslim skin.

Being a person who championed humanity, justice and civil rights, Muhammad Ali naturally supported the cause of the Palestinians and in doing so, for the world of Zionists, Muhammad Ali’s words indeed stung like a bee.

It is well known that Muhammad Ali has many Jewish friends, supporters and associates but that did not deter him from speaking out against Zionism which shows that like most, he did not consider Judaism and Zionism to be one and the same and that whilst he had no issues with Jews, the same could not be said for zionists.

On 8 March 1974, Muhammad Ali, who said he was retiring from the ring to spread the faith of Islam, lost no time throwing right hooks at Zionism. He told a press conference in Beirut, at the start of a tour of the Middle East, that:

“the United States is the stronghold of Zionism and imperialism.”

On a visit later to two Palestinian refugee camps in southern Lebanon, the former heavy-weight boxing champion was quoted by a guerrilla news agency as saying:

“In my name and the name of all Muslims in America, I declare support for the Palestinian struggle to liberate their homeland and oust the Zionist invaders.” [1]

On 19 February 1980, Mohammed Ali charged Zionists with “control” of America and the world.

Ali had been in India and in Africa as President Carter’s special emissary to obtain support for the Carter Administration’s boycott of the Olympic Games in Moscow this summer as part of the United States response to the Soviet invasion of Afghanistan.

In the bi-weekly, “India Today,” Ali spoke of Zionists when asked about the “militant revival” of Islam in Iran, and the holding of “your countrymen hostage.” Ali, said: “those people in Iran are fanatics,” and that “the other Moslems in the world have condemned their action”. He then reported to have gone and said:

“religion ain’t bad; it’s people who are bad. You know the entire power structure is Zionist. They control America; they control the world. They are really against the Islam religion. So whenever a Muslim does something wrong, they blames the religion.” An Associated Press dispatch, reporting Ali’s remarks about Zionism, quoted him as saying that he did not remember talking about Zionists.” [2]

On 28 June 1985, Ali arrived in Israel “to arrange for the freeing of the Muslim brothers imprisoned by Israel.” He said he would be discussing the release of “all 700 brothers” with the “very highest level in the country”. But Israeli officials declined to enter the ring saying “Israel does not intend to negotiate through boxing champion Muhammad Ali but will welcome him warmly as a private guest”.[3]

Whilst the world will mourn Ali, what is clear is that those who are the inheritors of his political stances today as regards Zionists, are absurdly referred to as Anti-Semites – would they go as far as call Ali that also?