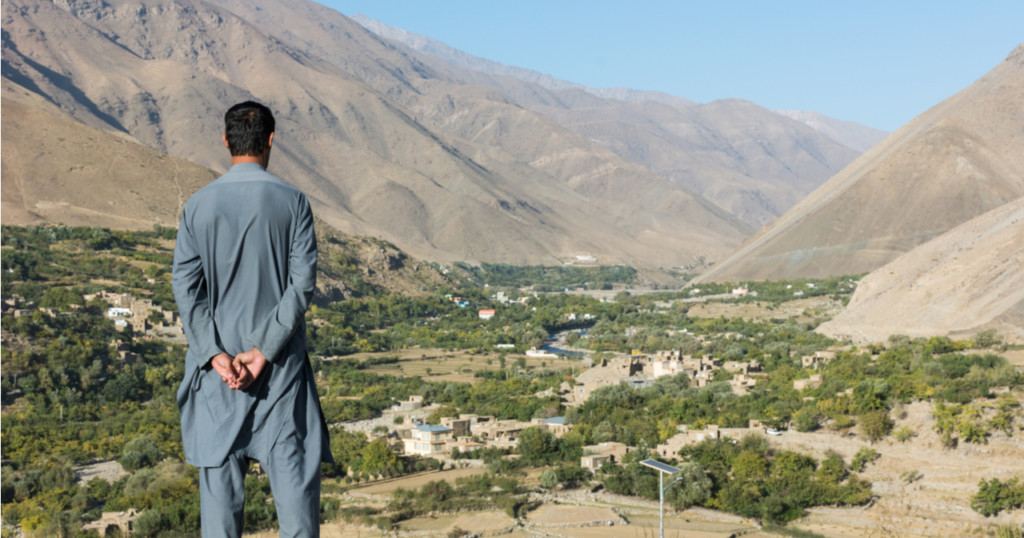 Six years ago – while I sat in a prison cell in HMP Belmarsh awaiting trial for terrorism charges for attempting to send a generator to Syrian rebels – I turned on the television to witness something that I felt was the start of the end of the longest war in the history of the US. That war had led to my imprisonment in Guantanamo Bay and my subsequent campaign against anti-Muslim policies in the ‘War on Terror’.

I was there the day the invasion of Afghanistan began, and I have felt its impact ever since.

News headlines on 31st May 2014 reported on Sgt. Bowe Bergdahl, a US soldier who had been captured by the Taliban in 2009. However, on that day in 2014, Bergdahl was to be released as a result of complex negotiations between his captors and the US government. The talks had begun in Qatar.

Footage of Bergdahl’s release aired by the Taliban showed armed militants, bearing white flags,[1] escorting Bergdahl to the custody of US special forces, who arrived in a Black Hawk helicopter. The handover is swift and over in seconds, but just before Bergdahl walks off with the Americans, there is a handshake between US forces and the masked Taliban men. There is even a final wave goodbye before the helicopter takes off.

Meanwhile, 8,000 miles away at Guantanamo, five senior Taliban commanders (the “Taliban Five”) were released to Qatar as part of the prisoner exchange. They arrived the next day in Doha, welcomed by their supporters as heroes.

US Congressman Charlie Wilson once described Jalaluddin Haqqani as “goodness personified.”[2] Haqqani had distinguished himself as a skilful battlefield commander who was able to mobilise fighters on the ground and garner international support for mujahideen forces fighting the Soviets. After the 9/11 attacks, however, Haqqani became close with the Taliban and joined the fight against US occupation. In 2012, his organisation, dubbed the “Haqqani Network”, was placed on the US terrorist list – although the Taliban was not on the list.

Haqqani’s son, Sirajuddin, took over leadership duties from his father, and in 2016 was named deputy leader of the Taliban.

In 2014, Anas Haqqani, Sirajuddin’s younger brother, was detained in a state along the Persian Gulf – believed to be the UAE – and handed over to the Afghan government,[3] which imprisoned him in Bagram.

In 2016, the Taliban abducted two professors working at the American University in Kabul.[4] American citizen Kevin King and Australian citizen Timothy John Weeks remained in Taliban custody for three years. During their captivity, they made an appeal, calling for the release of Anas Haqqani and two other Taliban leaders. Last year, this culminated in another prisoner swap. King and Weeks were handed over to US forces in Afghanistan, while Haqqani and the others were sent to Qatar.

Once again, both sides agreed to the exchange in the hope that it would expedite the peace deal.

After his release, Weeks said he had built friendships with his captors and even hugged them when he was leaving.[5] “I don’t hate them at all. And some of them I have great respect for and, and great love for almost.”

Weeks was invited to the peace talks over the weekend, where he met Anas Haqqani and other senior Taliban leaders.

From Qatar, Weeks tweeted: “I am blessed to be an official guest at the signing ceremony. I pray that that day, the future of those who have suffered for so long will finally change for the better. May god bless Afghanistan.”[6]

Yearning for a way out

America felt compelled to invade Afghanistan following the 9/11 attacks and the Taliban’s refusal to hand over Osama bin Laden. But, in doing so, it began a war that has lasted longer than any other in its history.

The Afghan Taliban were not responsible for attacking America and have not been implicated in striking US targets outside Afghan soil. However, US operations over the years have caused the deaths of thousands. Thousands more have been imprisoned in places like Bagram – where I was detained for a year – and have suffered torture and degrading treatment. Prisoners who endured these abuses went back home and told their families, tribes, and clans about the violence and religious and racial abuse they faced. The occupation was enough to mobilise many Afghans to fight against it. Human rights abuses by US troops – including the murder of prisoners – unquestionably increased anti-US sentiments as well as the swelling of Taliban ranks.[7]

“At that time, there weren’t a lot of Taliban. But when they opened Guantanamo and started arresting people, that was when the Taliban grew from thousands to hundreds of thousands. That was one of the mistakes. The rest is history.”[8]

Ready to fight, ready to talk

For years, the US had sought a way to start negotiations with the Taliban.

Former Taliban spokesman and ambassador to Pakistan, Mullah Abdul Salam Zaeef,[9] was also held in Guantanamo but, like me, was released in 2005. Zaeef visited Britain in 2011 and told me how the commander of the US forces in Afghanistan, General David Petraeus, had repeatedly asked him to facilitate negotiations with the Taliban. Petraeus was desperate to find a way out of Afghanistan.

Zaeef told Petraeus that if he really wanted to talk to them, he just needed to follow the rockets that were being fired at them and he would find the Taliban waiting at the other end – ready to talk…or fight.

Since 2011, Qatar has hosted Taliban leaders to begin peace talks. In 2013, Qatar was chosen as a neutral place where the Taliban could open an office and begin talks with the US. In 2018, the Taliban Five joined the political office and became key negotiators opposite their former captors and battlefield enemies.[10]

The position of the Taliban was simple: they were willing to end armed resistance and talk to their opponents, but the withdrawal of US troops was non-negotiable. Until such time that this position was agreed, the Taliban vowed that it was their religious and moral obligation to fight any invader, as well as any who sided with the invader. For this reason, they refused to talk to the Afghan government. Indeed, the latter have not been part of the US-Taliban meetings.

Several older Taliban members, such as Zaeef, spent their youth fighting another superpower. The Soviet Union invaded Afghanistan in 1979 and did not leave until 1988. Many veterans from this war went on to join the Taliban. As a result, they are the most seasoned and experienced fighters in the world. They took on two global superpowers and fought them both to a standstill over four decades. These feats are even more unfathomable considering that Afghanistan is one of the world’s poorest nations.

Commenting on the peace deal, President Trump said that US troops had been killing in Afghanistan “by the thousands” and threatened to “come back with a force like no-one’s ever seen” if the deal is broken.[11] This kind of language is unhelpful and meaningless to the people he is addressing.

Victory is not about the number of enemies killed. More than one million Vietnamese troops died during the US occupation of their country, while the US lost 58,000 troops. The USSR killed two million Afghans and lost only 15,000 soldiers. However, both superpowers lost the political will to continue the fight. Furthermore, its defeat by Afghan mujahideen forces contributed directly to the disintegration of the USSR.

America may not implode as a result of retreating from Afghanistan. Yet for a country that celebrated “victory” after the fall of the Taliban in 2001, Trump will struggle to explain how the Taliban controls vast swathes of the country and is active in 70 percent of the nation,[12] poised to return to power.

“I’ll say this for the Taliban. They’re great fighters. All you have to do is ask the Soviet Union, are they great fighters?” These are the words of President Trump following the peace deal.[13] Although the Taliban did not exist at the time of the Soviet occupation, we get the president’s point.

The Taliban are already celebrating it as a victory – one that came at great cost.

Around 46,000 Taliban fighters have been killed during the conflict, but the leadership of the organisation can describe them as martyrs who died defending their homeland. An equal number of Afghans have died either fighting the Taliban or have been caught in the crossfire. Trump will have a harder time explaining why 4,500 coalition troops died in a foreign land – over half of them Americans.[14]

Responding last year to questions about why the Taliban fight, chief Taliban negotiator Sher Mohammad Abbas Stanikzai said: “The war was imposed on us. It is American soldiers who are in Afghanistan. It’s not our mujahedeen in Washington. If they do not want peace then we will be compelled to defend ourselves, even if it continues for a hundred years.”[15]

In truth, everyone is tired of war. Afghanistan needs and deserves peace and prosperity. America could have begun negotiations with the Taliban from the outset. The occupation did nothing but create pain and strife. Aside from the dead, injured, imprisoned, and dispossessed, Afghan refugees have been crossing land and sea – often dying and drowning on the way – just to escape the misery in their land.

For their part, the Taliban – or the Islamic Emirate of Afghanistan, which the US does not recognise – have promised not to let their soil be used to launch attacks on the US and its allies.[16] They seek to extend their dialogue to all Afghans, including the government, once US troops have withdrawn. They want prisoners released on all sides.

In an op-ed for the New York Times, Sirajuddin Haqqani wrote, “I am confident that, liberated from foreign domination and interference, we together will find a way to build an Islamic system in which all Afghans have equal rights, where the rights of women that are granted by Islam — from the right to education to the right to work — are protected, and where merit is the basis for equal opportunity.”[17]

When the head of a proscribed terrorist organisation can pen an op-ed in one of America’s top news publications, you know that things have changed for good.