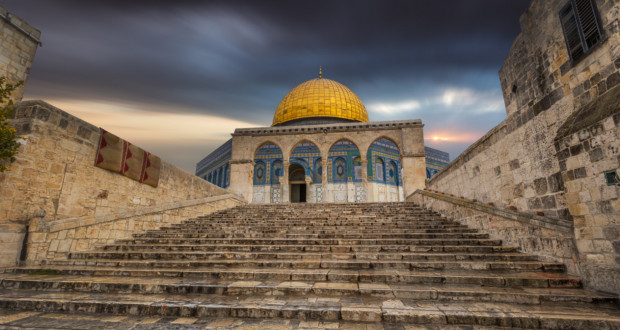 All praise belongs to Allāh, Lord of the Worlds, and may His peace and blessings be upon the Final Messenger, Muhammad ﷺ.

We are with the Muslim community, its imams and scholars in the UK and all over the world, observing the various attempts of some extremist groups—reportedly under the supervision of Israeli armed forces—to take over and occupy the al-Aqsa Mosque this Ramadan 1442/2021.

Al-Aqsa is the third holiest place in Islam and is central to the creed of Muslims.  Allāh says in the Qur’ān,

“Exalted is He who took His Servant by night from al-Masjid al-Haram to al-Masjid al- Aqsa, whose surroundings We have blessed, to show him of Our signs. Indeed, He is the Hearing, the Seeing.”[1]

Therefore, we are calling upon the entire Muslim Ummah in these blessed nights to stand up to defend its honour and its holy places. We also call upon the political leaders of Muslim countries to exercise maximum pressure on the international community to stop this systematic terror indiscriminately inflicted upon unarmed worshippers, and to preserve the sanctity of this holy place as an Islamic place.

We also call upon the Ulamā of the Ummah to mobilise the Muslims to defend al-Aqsa and make it central to their concerns. Alhamdulillāh, there are some organisations that are working to provide logistical and financial support to the Palestinians, and they should be supported.

We also call upon the rest of the Ummah to try to defend al-Aqsa and the worshippers being attacked therein, according to each individual or group’s ability.

Muslim individuals and congregations must make du’ā to Allāh to protect His worshippers from this terror, plant firm their feet and spoil the plots of the terrorists. Do not underestimate this, for Allāh has promised:

Media outlets on the right side of history should take the responsibility of educating the world about the just cause of al-Aqsa and the injustice and oppression that is being carried out by illegal Zionist occupying militants.

Activists on social media should use their platforms to increase the awareness of the crises taking place in al-Aqsa against its sanctity and that of worshippers within it.

We appeal to our community to exercise pressure on our government to strongly condemn these attacks and exercise pressure on the Israelis to fulfil their duties under international law as occupation forces, and stop the aggression against Palestinians as well as sacred Islamic places.

We also appeal to our government to stop the displacement and eviction of the Palestinians from their homes and lands in the area known as Sheikh Jarrah. The motive behind this move is to take over that important and historical area located north of the old city of Jerusalem.

We also encourage Muslims to attend this emergency demonstration. It is part of ibādah during Ramadan, which is a month of striving hard (jihad) – as many battles have taken place in Ramadan. 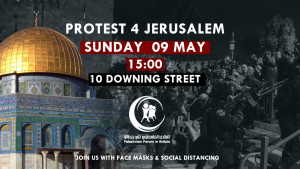 Finally, we would like to say to the Palestinians who are standing on behalf of the Ummah in defending its honour and holy places, that the entire Ummah is proud of you and will not forget you in their prayers. Victory is close to you and the Ummah by the will of Allāh. We also would like to remind you of what our Prophet Moses said to his true followers:

“Said Moses to his people, ‘Seek help through Allāh and be patient. Indeed, the earth belongs to Allāh. He causes to inherit it whom He wills of His servants. And the [best] outcome is for the righteous.’”[4]

And Allāh is Predominant over His affair, but most of the people do not know.