Should Russia’s annexation of Crimea concern us? 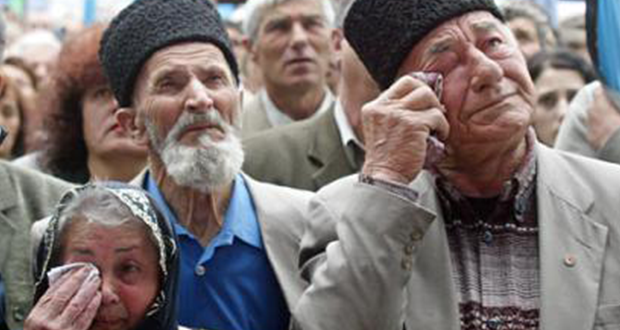 The Tartars are the state of Ukraine’s ethnic Muslim minority. Years ago this community were exiled by USSR leader, Joseph Stalin, to Uzbekistan and Siberia. This was done as a form of collective punishment for the Tatar’s alleged collaboration with the Nazi occupation. In the process of their mass exodus, more than 100,000 of the deportees died of starvation and disease.[1]

Following the annexation of Crimea by the Russian Federation, very little was reported about the condition of the Muslims in that region. When the situation developedto include other Ukrainian cities including Donetsk along with the Ukrainian government’s campaign to recapture them, hardly any news at all has been related about their changing condition.

Since the fall of Crimea, there have been distressing reports about the treatment of our brothers and sisters in the region. For instance, on March 15, a day before the referendum on the state of Crimea, a 39-year-old Tatar named Reshat Ametov “was found dead after being missing for several days. His body had clear signs of torture: His head was wrapped with Scotch tape, and his legs were shackled.”[2] Reshat took part in protests against the capture of Crimea’s parliament by what later President Putin admitted were Russian Special forces.This sent a very concerning message to the Tatars, which is that loyalty to the de-facto regime is what keeps you alive, while dissent will result in death.

On March 31, a 14-year-old Tatar boy[3] was attacked[4] in Crimea by two Russian passers-by for speaking on the phone in the Tatar language. This incident took place in the wake of calls by some Russians to discourage the use of the Tatar language and get all who use it deported again. An allegedly leaked report[5] with the intent to frighten people furthermore revealed that Putin may turn to his loyal friend, Chechen President Ramzan Kadyrov and use his armed guards to “change” Tatar minds in Crimea.

These are but a few examplesof the ensuing condition of Tatar Muslims following the annexation and itis truly heart-breaking that Muslims across the world have failed to be of support to them not just politically or financially, but in terms of raising awareness and remembering them in Du’ā. Think about the last time you heard requests for Du’ā for the Tatar Muslims, even during the holy month.

Russia has moreover deemed Tatar political parties as extremists and has either restricted their activities or outright banned the movements of community leaders, as was the case for Refat Chubarov, who was banned from entering the Russian Federation for five years.[7] He is the current leader of the Crimean Tatar Mejlis. The reason for his ban emerged later, and was due to “signs of extremism” allegedly sensed by the Russian authorities from a speech he gave a day earlier.[8] This alone serves a precursor to further, heavy restrictions and side-lining the Tatar Muslim community is about to face.

The UN says it has documented “serious problems”[9] of harassment and intimidation facing the Tatar community in Crimea, amongst growing fears of mass persecution of its Muslims members. Alongside this, Refat Chubarov and other civil society actors in Crimea have made reports of unidentified uniformed men claiming rights on properties and land.[10]This is something we are more used to seeing occur to our brothers and sisters in Palestine at the hands of settlers who stealpeople’s land and kick them out of their homes.

The incidents in Crimea have caused many Tatars and ethnic Ukrainians to begin what some call a second exile to other cities. The UN states that local authorities and private citizens have “already accommodated some 639 Crimeans, among them a majority being Crimean Tatars who have left and gone to the Lviv region; others have left for Turkey. The number of Crimean Tatars currently displaced is estimated to have reached 3000.”[11]

Due to their exile, our brothers and sisters have encountered many problems including:[12] overcrowded housing and poor sanitation; difficulties finding jobs to support and feed their families; having to rely on each other to survive as the state of Ukraine hasnot offered them financial help to cope; and they are now facing new fears among local authorities of the potential ‘Islamisation’ of Lviv.

Even with these difficulties, many Crimean Tatars simply hope they can withstand and survive their ‘second exile’ and one day return home. Indeed, as one brother stated, they try to convince themselves that they are simply on vacation.

So dear brothers and sisters please keep these people in your Du’ā and do not overlook them from your political and financial support as they have been through so much hardship and persecution both historically and currently. May Allāh, keep these people strong and ease their difficulties.