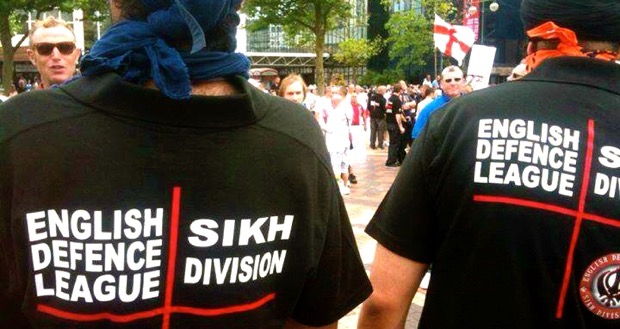 “I wonder what happened to her? I think the last I heard was that she was in Pakistan…”

At the centre of Dr Katy Sian’s book, Unsettling Sikh and Muslim Conflict, lies the question of Sikh identity, and particularly, what being Sikhni means in modern day Britain. Sian effectively charts how Sikhs in the UK have largely built an identity that is based on the politics, history, folklore and myths surrounding their intersection with Muslim communities dating back to their formation during the Mughal period of India.

Sian charts every day interactions within the Sikh community and found what was manifest were the Islamophobic narratives about who Muslims are, and the extent to which they pose a problem. The quote above from her prologue tells a familiar story within Sikh communities, of Sikhni girls who fall in love with Muslim boys and eventually end up being sold into a life of forced prostitution in Pakistan. The work is filled with a number of anecdotes from those she interviews, but is also interspersed with her own experiences. One example of the casual Islamophobia she encounters comes at the very beginning of her first chapter, where at a family gathering an acquaintance remarks,

“…it’s the Muslims who have caused all the problems in the world…We need to shoot all the Pakis!”

While the above sentiment may perhaps represent the strongest manifestation of anti-Muslim responses within the book, it is the consistency with which Sian presents the formation of Sikh identity as a response to Muslims that is particularly stark. Although she successfully charts how British colonial treatment of Sikhs as a martial race, and Hindu massacres against them, very much informed their trajectory of their development as a people, it is still Muslims that are chief among their concern. What is missing however, within the Sikh narrative, is the extent to which British colonialism and Hindu nationalism has impacted them both culturally and politically, and how those constructions have fed into their positioning of Sikhs within the diaspora,

“Diasporic Sikhs share with Muslims similar instances of being constructed by the West as a problematic community; for example, following the attack of 1984 the agitation of Sikhs in the quest for a separatist state created global arousal whereby Sikhs became intrinsically linked with terrorism…In the British context, the 1960s, 1970s and 1980s saw persisting campaigns concerning Sikh dress code, particularly with cases of the turban and the possession of the kirpan; such activity pioneered British multiculturalism. Given the homologies between Muslim and Sikh diasporic conditions, the question arises of why Sikhs appear so invested in distancing themselves – in primarily antagonistic terms – from Muslims in postcolonial Britain.”

The interviews conducted by Katy Sian highlight an intergenerational narrative of trauma that runs linearly from Mughal responses to the emergence of Sikhism in 1469 to the violence of partition in 1947 all the way to fears around Muslim ‘extremism’ in the UK. The largest part of that narrative revolves around forced conversions, the martyrdom of the Sikh men who resisted those conversions, and the bemoaning of the Sikh women lost to those conversions. When Gayatri Spivak wrote her seminal essay Can the Subaltern Speak? she referred to white men saving brown women from brown men. In a strange form of colonised narratives, Sikh views towards Muslims seem to reflect that view, except to contextualise it to their own environment, where Sikh men are saving Sikh women from Muslim men,

“…when a Sikh man, Mangal Singh, reflected on his experiences he talked of how he and his two brothers chose to kill or, rather, martyr the women in his family to escape conversion to Islam. ‘“We had to do this”, he told me “because otherwise they would have been converted.””

It is in a post-9/11 environment in particular, that the conflict between Sikhs and Muslims has magnified. Not only are Sikhs being attacked due to mistakes by racists in who they are attacking, but the prevailing internal narrative within Sikh communities has meant that they have come to view Muslims as being different, external, a community not capable of integrating into British society as they have.

While some of these narratives remain internal to Sikh dialogue about Muslims, there are increasing ways in which aggressions and micro-aggressions play out externally. Even in universities, literature was distributed among Sikhs warning specifically of how members of Hizb-ut-Tahrir would pretend to be Sikh, become boyfriends to Sikh girls, and forcefully convert them to Islām before selling them, in a completely fabricated scenario. Sian recounts a meeting she attended between Sikh leaders and the Metropolitan police where such issues were raised, but no actual evidence could be produced,

“In relation to the police meeting on the topic we can see the same narrative structure of the threat, or rather the fear, of the Muslim being articulated. Moreover the views expressed at the police meeting support the hegemony of such a narrative that is evidently embedded within the Sikh community. The meeting proved significant for a number of reasons. I attended the meeting to find out more about the general issues affecting the Sikh community, but on closer inspection political logics were in play throughout the whole meeting. Let me elaborate. First, the police starting the meeting with discussion of the terror threat level in the UK seemed perplexing. By starting a meeting to discuss Sikh issues with the terror level, the Sikh community representatives shaped the following discussions, which were all centered upon Sikhs against Muslims, or “friends” against the “enemies.””

Dr Katy Sian is ultimately showing, that a securitisation and also a ‘westernisation’ of the Sikh identity discourse has organically developed old colonial logics into a new threat within the discourse around British Asians. Such a discourse creates a conflict that is reductive and nearly entirely based upon myth, rather than facts. Of greatest concern is how such a discourse plays into the structural racism and hegemony of the state as it seeks to control communities and, even at times, to keep them in conflict with one another. Such a context cannot be ignored, for it sits at the heart of how we engage with one another in a neo-colonial Britain, and also how we also engage with our own conceptions of identity and dissent against a structural form of assimilation.

What Sian does not delve into is what this story means from the perspective of Muslims. In a neo-colonial world where post-colonial thinking is restricted largely to academia and activism, how can Muslims begin to understand intersectionality so that the struggles of others become their own. It may be controversial for some Muslims to hear, but when Sikhs are attacked for being Muslim, when an Ahmadi mosque is made victim of an arson attack and when Jean Charles de Menezes is shot in the back of his head, these are issues that the majority of Sunni and Shia Muslims must take on because, in actual fact, they are not only manifestations of racism, but manifestations of Islamophobia.