The Burkini Ban Shows Our Power 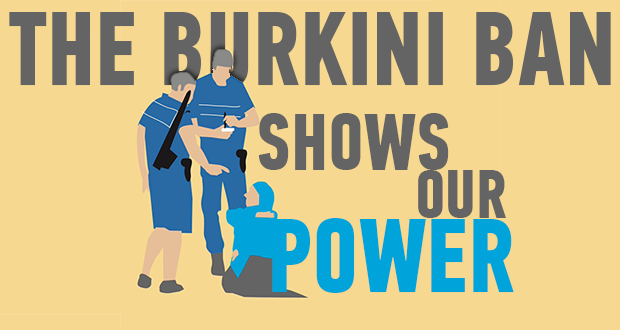 Many have been talking about the infuriating images we have seen of armed French police forcing a Muslim woman to strip to her undergarments on a beach in front of sun-bathers laughing, clapping and shouting racist abuse at her.[1] As one onlooker told the Guardian,

“The saddest thing was that people were shouting ‘go home’, some were applauding the police… Her daughter was crying.”

Although it is a sad example of what Muslim women face regularly in France, I am glad that the plight of our sisters has received some attention. The extreme authoritarianism we have been witnessing has made the carefully held façade of white supremacy, that France and its sister nations are more ‘enlightened’ or ‘superior’ than everyone else, increasingly difficult for its propagandists to uphold. There is no logic. There is no enlightened reasoning. There is only the coercive reach of state ideology and the fear of people’s empowerment that endangers it.

The whole European nation-state project has been in crisis since it began. Whereas Europe’s empires used to be held together with the threat of brute force, with a shared (Christian) religious identity of its citizens, those benefitting from the coercive nation state model have struggled to give people within artificial borders some kind of reason or shared values to identify their ‘nation’ with. As a result, our secular liberal state ideology must be defended at all costs. We have the right to invade and occupy sovereign nations to spread our ideology, whether they like it or not. No amount of violence or totalitarianism is too much to ‘defend the nation’.

Are Muslim women some kind of obstacle to this?

Some of those in denial have been trying to spin the war on Muslim women’s clothing as some kind of glitch in a normally enlightened, ‘free’ society; as an unfortunate imitation of one of those “backwards” Muslim countries that force women to cover themselves. I don’t buy that. I believe these are just excuses to pacify people while propping up an inherently authoritarian, unnatural centralisation of state power that serves few. It is a case of distracting the many by using whichever scapegoat is in fashion.

It is heartening to see the majority of non-Muslims I’ve come across criticise France’s recent own goals, defending Muslim women’s rights to choose what they wear. However, I am not fully satisfied with the “It’s their choice” narrative since it often hides a latent white supremacy that can be traced back to colonialism. Not to burn bridges, but this supremacist mind-set still imposes on us Muslim women a story that is not ours. It assumes us poor, defenceless, subjugated, oppressed objects are somehow convinced by men to cover ourselves despite not wanting to.

France banning the hijab is NOT like Muslim countries mandating it

We should not assume morally or philosophically, that asking someone to put something on is the same as asking someone to take something off. Covering ourselves is from the fitra of human beings,[2] whilst uncovering ourselves is from the fitra of animals; a learned behaviour for humans. More importantly, the instruction to cover oneself brings about benefit and repels harm both in this life and the next. As a result, all human societies have a minimum requirement for civilised adults to cover themselves in public.

If, according to the customs of a particular land, the vast majority share a particular minimum covering for men or women in public, then I do not see any problem with the law of that land reflecting that. If those criticising Iran or Saudi Arabia were genuinely against the prohibition of nudity (or against laws in general) I would respect their position despite disagreeing with it, obviously. If they were not, then their critique amounts essentially to “my culture’s threshold for nakedness or covering is superior to theirs,” hence the double standards and hypocrisy. They tend to—albeit subconsciously—regard their own cultural norms of covering as a civilising trait (distinguishing them from the naked tribal women they see on National Geographic), whilst seeing Muslim covering as a sign of subjugation or sexual exploitation; and herein lies the latent white supremacy.

The attack on Muslim women’s dress ironically shows just how much power we have. We have always been a locus for cultural engineering, since we are the carriers of culture from one generation to the next. We also represent a visible defiance against a male desire-oriented popular culture exported around the globe. This is one reason I believe the majority of new Muslim converts in the western world are women.

We see in our societies tragedies such as 85,000 women being raped a year in England and Wales alone (that’s more than 200 per day), with nearly half a million sexually assaulted every year.[3] 1 in 5 women aged 16-59 has experienced some form of sexual violence since the age of 16, and a ‘rape culture’ permeates the country’s top universities.[4] A record 50% of our teenage girls suffer eating disorders due to the air brushed industries profiting from women’s manufactured, continual discontentment.[5]

Despite all of this, propagandists struggling to prop up this inherently unpleasant status quo always try to turn our attention somewhere else; from the trivial, odd story of a Muslim woman in niqab fainting, to the systematic, malicious misrepresentation of so-called ‘honour’ killings or FGM as ‘Islamic’ somewhere thousands of miles away.

The harder they try and spin our defiance of this status quo as a problem, the harder we will cling to our identity and our clothing. Muslim women should be an example for non-Muslim women. It is comforting to note that non-Muslim women are flocking to buy burkinis,[6] with the designer claiming almost half of all burkinis are bought by non-Muslim women![7] It is we who are upholding the natural fitra we have all been created upon and resisting the wider society’s call for us to lose our modesty and haya. Allah has already told us:

You are the best nation produced [as an example] for mankind. You enjoin what is right and forbid what is wrong and believe in Allah. If only the People of the Scripture had believed, it would have been better for them.[8]

If we are denied from some beaches, then so be it. We would much rather hold onto our principles and await the beaches of the Hereafter if must. We do not take the words of men to undress above the words of the Creator instructing men and women to dress modestly.

The historical European has always had a complicatedly bitter relationship with the way we dress, and our unveiling has always been a symbol of colonial success. The words of Frantz Fanon in A Dying Colonialism are worthy of reflection, particularly in the first chapter, Algeria Unveiled.[9]

“After every success, the authorities were strengthened in their conviction that the Algerian woman would support western penetration into the native society. Every rejected veil disclosed to the eyes of the colonialists horizons until then forbidden, and revealed to them, piece by piece, the flesh of Algeria laid bare. The occupier’s aggressiveness, and hence his hopes, multiplied ten-fold each time a new face was uncovered. Every new Algerian woman unveiled announced to the occupier an Algerian society whose systems of defence were in the process of dislocation, open and breached. Every veil that fell, every body that became liberated from the traditional embrace of the haïk, every face that offered itself to the bold and impatient glance of the occupier, was a negative expression of the fact that Algeria was beginning to deny herself and was accepting the rape of the colonizer. Algerian society with every abandoned veil seemed to express its willingness to attend the master’s school and to decide to change its habits under the occupier’s direction and patronage.”

“Unveiling this woman is revealing her beauty; it is baring her secret, breaking her resistance, making her available for adventure. Hiding the face is also disguising a secret; it is also creating a world of mystery, of the hidden. In a confused way, the European experiences his relation with the Algerian woman at a highly complex level. There is in it the will to bring this woman within his reach, to make her a possible object of possession.