The militarisation of US police 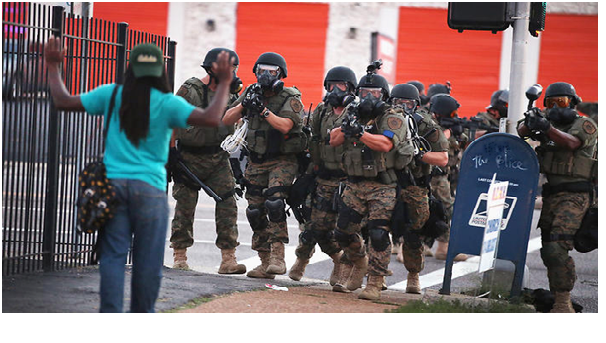 Aren’t the police supposed to protect the people of Ferguson?

The death of Michael Brown, a young African-American teenager who was shot six times[1]—whilst unarmed—by police officer Darren Wilson, has caused great controversy in the United States. This has caused the debate on race to begin anew with citizens in Ferguson protesting in the state of Missouri. However what is most concerning to the general public is the way the police and the state of Missouri have handled the incident, seeing that we cannot tell the difference between the police and the army.

Ever since the early 1990s the military-transfer program from Congress[2], which has seen expansion since 9/11, have given police forces across the states grants, which in turn have given them access to the vast military armoury of the US armed forces, such as bomb disposals robots[3], armoured personnel carriers and bomb-proof vehicles, which were used during both the Iraq and Afghanistan wars. As a result we are witnessing military vehicles made for warzones being driven around local suburbia, which has raised the concerning question: is the police becoming too militarised in the US?

Take the small, quiet city of Keene in the state of New Hampshire. Their SWAT team wanted to requisition a Bearcat (pictured). What was their reason? Counter-terrorism. They cited their annual pumpkin festival[4], as a potential target to terrorists. This is just one of many examples of how the system set by the Pentagon is being very badly abused. As a result we see what we are witnessing today in Ferguson: men who are holding high-end military equipment which they are not able to properly use. Some would say we are seeing the power getting to their heads.

The militarisation of the police isn’t the only issue in Ferguson. The key factor in the events there is the racial tension, seeing that their police force only has two African-Americans, with one Hispanic and two Asia pacific islanders, the rest being overwhelmingly white. This is who is ‘protecting and serving’ an area which is two-thirds African-American[6]. This in turn has led to what residents feel is the abuse they face by the police. This can be seen again by the St. Louis county police force, where “About 67 percent of Ferguson’s residents are African-American, but only 7 percent of the city’s commissioned police officers are black.”[7] The concerning misrepresentation of the police force has contributed to the racial tension not just in Ferguson but across the United States. 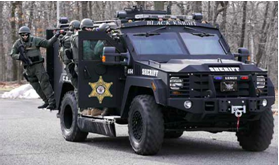 Take the image at the top of the article as an example. Other than the fact that they don’t look anything close to your typical police officers; notice how they are pointing their guns at the unarmed civilian. Many veterans have stated that the officers are not properly trained on how to hold such high powered arms, indeed they make the point that a gun should be pointed at an individual if you intend to shoot. Once again reinforcing the point that they are ill-prepared to handle such equipment and as a result have caused many issues and concerns.

These concerns were highlighted when even the press were threatened and frequently arrested even when they were following the orders that were being shouted at them by those who claim to “protect and serve”. Two such incidents occurred on august 17th, where one reporter was threatened to be shot and another was threatened to be maced[8], indeed the reporter who was threatened to be shot at was Mustafa Hussein, who was filming with his lights on and this had made it difficult for the police to see. One officer orders Mustafa to leave and to “get that light off, or you’re getting shot with this.” The second incident occurred when MSNBS’s Chris Hayes was filming and was told by an officer that “Media do not pass us, you’re getting maced next time you pass us.”

Alongside this the police attempted to shut down Don Lemon’s live CNN broadcast[9] of the protests as he says “I think we’re about to be arrested because we’re standing on a sidewalk,” whist a police officer began to shove him backwards whilst shouting “move out of the way!” This in turn shows a very disturbing picture in a country where freedom of speech and the freedom to assemble are held in such high veneration, although the Obama administration has called for restraint, with the highest legal authority the attorney general Eric Holder Jr, conducting an investigation into the matter. He too has rasied his concerns with the police’s response saying, “I am deeply concerned that the deployment of military equipment and vehicles sends a conflicting message.”[10] It appears that the US’ almost religious commitment to the right to bear arms[11] has led to what we have seen not just in Ferguson but across the United States as well.

One event which has served to remind us of the Police’s heavy handed tactics occurred at the sight where Michael Brown was shot. People gathered in small groups sharing stories of police harassment and discrimination, after which the police claimed they “felt they had no choice but to use tear gas and rubber bullets. They could not allow looting to happen again, they said, and dispersing the crowds was the only way to stop it.”[12] This sounds rather familiar to the way the Israelis would respond to Palestinian protesters. Indeed this highlights the need to reform the police by making them more representative and at the very least have them trained to use their military grade gear more appropriately. This is due to the fact that such heavy handed tactics will simply incite the already disgruntled community and in fact provoke them to become violent which is what the police claim to be preventing.

For an illustrated look into how military gear is spread across the United States, take a look at this link where you will be able to see how military vehicles, body armour, military grade assault rifles and so forth which are made for warzones, are given to local police forces.

This paints a very concerning picture as to how the US’ military armoury is now being accessed by the local police. Therefore congressional hearings are being conducted into the subject of the militarisation of the police. Legislators asked why “do local agencies need automatic weapons, sniper rifles and armoured personnel carriers?”[13] Others however defended the program that has “given roughly $5.1 billion in military equipment to local authorities since the program was created in 1990.”[14]

“By declaring war, we have opened the door for outfitting our police to be soldiers with a warrior mindset.”[15]Dr. Peter Kraska, a professor at Eastern Kentucky University’s School of Justice Studies.

This is why the police need to be adequately trained as to how and when to use such equipment or there needs to be greater regulation so as to prevent such high grade military equipment to be so easily accessible in order to prevent the images that were witnessed in Ferguson.

As a result more need to be done and it is hoped more efforts will be made by congress in order to help prevent such concerning scenes as we have witnessed in the town of Ferguson, Missouri.