Are you ready for our first ever NATIONAL CAMPAIGN?
Home / Featured / Virtual Reality Refugees 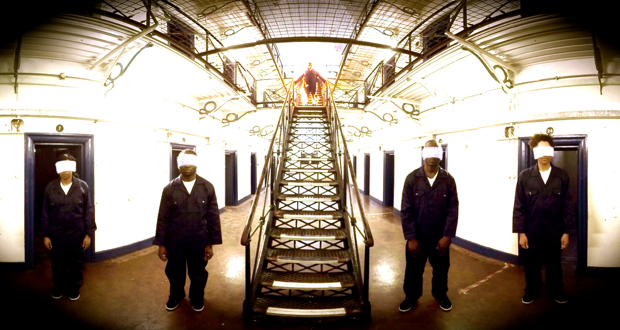 Meet the man bringing the issue of immigration detention centres in the UK to the world’s attention through virtual reality film. On a microscopic level, I introduce Darren Emerson, the innovative Director, filmmaker and founder of VR city who simulated a 360° virtual reality film depicting life in the UK immigrant detention system “through the true voices of people’s experiences”. The film can be seen via headsets that “you can’t turn away from” for audiences to momentarily experience what it is to be a refugee in today’s world, transported through 360° surround visuals generated by glare and head movement.

With the nature of the UK immigration detention centres, which have been likened to high security prisons, positioned in hidden locations with limited access “you would not find it unless you were looking”, Darren expressed. The film, which was posted on the New York Times app on Monday 19th December,[1] explores three areas: coming to the UK by claiming asylum; sitting behind bars with no access to internet or information about proceedings, and the tragedy of self-harm and suicide due to mental scaring after being held for an indefinite amount of time. Darren commented, “people easily make distinctions between good and bad immigrants, they may leave the detention centres eventually but the centre never leaves them”. This heinous narrative has circulated around our media spheres for far too long. Tainting the name of Syrian asylum seekers finding an alternative to the horrors they face at home. Contributing to the apathy felt in the west today, generated by monstrous images of denied refugees.

Darren recalls, “there was a great part at the end of the film where a small protest takes place, some people present felt proud and empowered whilst others felt saddened by how small the group protesting was”. This is an accurate representation of the split in consensus here. He says, “awareness through film, will create more public pressure”. Where virtual reality is a “slightly different language of story-telling, emersed in something that feels quite metaphysical, you connect in a way you wouldn’t get to through normal mediums.”

There is a lot of doubt in the rhetoric and propaganda circling media and social media spheres about the plight of refugees (or ‘migrants’ as some would rather call them); doubts in charities on the ground, doubts in child reporters on twitter and doubts of the legitimacy of independent journalists on the ground. Syria is a very complex and nuanced battleground; we must acknowledge this and question what we are told by interested parties. We must not fall into the trap of completely discarding very real and legitimate cries documenting the mass suffering of a people irrespective of who is documenting it and for what purpose. Oppression is very real, suffering is very real, deaths are very real, broken minds and families are very real. Reporter and filmmaker Bilal Abdul Kareem, for example, who escaped the besieged part of Eastern Aleppo, is a courageous voice and drive for listeners globally. The message he called out still applies today

“If Aleppo is important to you, then you have to understand Aleppo is happening all over Syria, if you want to make a difference, women and men are dying under missiles every single day and you have to be willing to say enough is enough and rally your leaders”.

He called protestors to “be engaged, be active, if you don’t you will fall into the narrative”. Fatima, an activist and student based in London, said on twitter,

“I believe everyone is capable of doing something, but we convince ourselves that it’s in the hands of the international community, despite the fact that they have failed Syria over and over again”.

In humanity there is a simple but powerful rule: it takes one intrepid individual to change a point of view and bring about a new idea, it takes one more individual to join that person to create a movement, a couple more and you have a revolution. Each of us in our own unique, creative, numerical, sporting, theatrical, medicinal, astrophysical way can help with talent and ideas. We are led to remember the timeless quote, ‘I alone cannot change the world, but I can cast a stone across the waters to create many ripples’.

As we all become engrossed in our holidays, over-indulging on meals, and when the New Year brings competition of the most extravagant displays of wealth with fireworks, the news stories covering Aleppo,Syria and the plight of refugees die down. Out there, somewhere in the middle of a broken country, lies many a broken city, under a broken building, amongst ash and rubble and bodies, and snow. Therein live children, women and men who are separated, trying to make sense of the horrors that have come to pass. Cold, starving and mentally tormented.

Spending extra time breaking down the political complexities of the region to self-educate in matters that politicians will have us confused about can be massively helpful. In languages of humanity, a degree is not required nor will it teach us how to be more human. Rather, admitting what we do not know welcomes more knowledge. Let us research and eradicate doubts in order to donate more to charities involved. Let us diminish hesitancy and work on personal apathy. Bilal Abdul Kareem on his twitter called out via video to us, after intense shelling resumed in Aleppo,

“It appears when people are disengaged the sounds of war are stoked again. I need for everybody to retweet it as much as you can, everybody must stay engaged get educated”.

Even if the shelling ceases, the torment continues. In our own capacity there is an expectation to hold ourselves to some sort of standard and accountability in justifying our warmth, to have a conversation with Allāh (subḥānahu wa taʿālā) and ourselves in what gifts He (subḥānahu wa taʿālā) has put in each and every one of us with extreme importance and purpose. We must have confidence in our gifts, intellect, talents and capabilities to think outside the box, to rally, to help and to never forget.