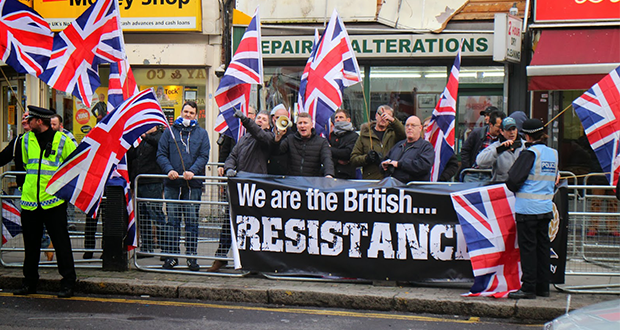 Britain First and the lessons from the conversion of ‘Umar

Britain First was launched in May 2011 with as its chairman Paul Golding, who had been a councillor representing the far-right British National Party.

In February 2014, Britain First conducted what it called the “Christian Patrol”[1] in Tower Hamlets, East London, which has a high Muslim population, to counter the “Muslim Patrol” which had first come to media attention in 2013 [2]. Around a dozen or so Britain First “activists” recorded themselves holding a banner proclaiming “We Are The British Resistance,” driving around in armoured vehicles and emptying cans of beer outside a mosque to “bait” Islamic extremists operating in the area. A video uploaded onto social media showing the event gained national media attention in the UK [3], although obviously far, far less coverage than the two boys that made up the “Muslim Patrol”.

In May 2014 members of Britain First protested at ten Bradford mosques, as well as in Glasgow [4]. They protested of the action of grooming gangs in the area, accusing the community elders of failing to stop the gangs, while handing out Army bibles and proselytising Christianity. Earlier this week, Britain First sought to “invade” London’s largest Mosque, the East London Mosque in Whitechapel [5].

Each time they visit a Mosque, which conveniently always seems to be empty at the time of their visit (highlighting their cowardice), they post a message on social media sites that the Mosque in question had been “Invaded”.

When ‘Umar got to the house after having visited his sister’s house, he knocked at the door of the house of Arqam.

“Who comes?” enquired the guard.

As the guard peeped through the door he saw that Umar had buckled his sword. The guard therefore hesitated to open the door.

Hamzah (radiy Allāhu ‘anhu), the Lion of Allāh, said to the guard, “Open the door; if he comes in peace he will be welcome. If he is bent on mischief, we are enough to overpower him and he will be harmed with that which he came to do.”

We know of course that ‘Umar (radiy Allāhu ‘anhu) entered the house and proceeded to accept the message of Islām and the rest as they say is history.

The above incident provides us with many reminders but there are two powerful and beneficial reminders with respect to the situation in discussion. Firstly, it shows us that it is Allāh who is the controller of the hearts and even though ‘Umar set out with a particular intention, which was to cause harm to the dīn of Allāh, Allāh changed his heart such that by the time he reached his destination, he became conquered by the very message which he had set out to conquer. It is therefore not out of the ordinary to perhaps witness individuals such as Paul Golding and all those like him being guided to Islām, inshaAllāh. When confronted by anyone, we should always remember to conduct ourselves with the greatest of character and manners as indeed the Messenger of Allāh (sall Allāhu ‘alayhi wa sallam) said:

“The most beloved of Allāh’s servants to Allāh are those with the best manners.” [6]

However, the second important lesson we can derive from the above incident is the firmness shown by those inside the house of Arqam. Even though ‘Umar was one of the most feared men in all of Makkah and even though the Muslim community were in a minority and in such a position of weakness, such that the religion was in fear of total extinction in its period of infancy, men such as Hamzah and indeed the Messenger of Allāh (sall Allāhu ‘alayhi wa sallam) who asked the guard to let ‘Umar in, did not waver in facing those who showed enmity towards them. So yes, we should always welcome anyone in to the House of Allāh—Britain First or otherwise—with the best of manners and conduct as stated above, however we should not be in fear or be intimidated by them in any way, shape or form as indeed Hamzah’s statement made clear.

Therefore, if Britain First enter a Mosque without taking off their shoes for example and trample over areas where people perform their prayer, then I believe that this is a violation of the sanctity of the Mosque and they should be challenged by those inside and informed of this. If they adhere to the advice and remove their shoes and it’s possible to have a dialogue with them, then by all means, this is a welcomed opportunity to engage, impart and share with them your faith and clear any misconceptions that they have. If however, they are not interested in dialogue, then they should firmly be advised to leave. It is important that we as people, let alone as Muslims are not intimidated or bullied by anyone and let’s be clear, Britain First seem like nothing other than bullies.

Furthermore, in this dawn of unprecedented assaults on the Muslim community in Britain, we must be bold in standing up to the challenge that we are faced with in articulating our Islām for the masses to see, and be honoured and feel proud in doing so rather than feeling as if we need to hide and remain silent. A great example of this is found in the time of the Mongol invasion of Baghdad (in modern day Iraq). The defeat which the Muslims faced at the hands of the Mongols in the 13th century was such a decisive blow, that for the first time since the very early stages of the faith, there was a real fear that Islām and Muslims could be wiped off the face of the earth, such was the brutality and barbarism with which Baghdad was ransacked and the Muslims annihilated at the time.

Amongst all this doom and gloom and when Muslims were in a real position of weakness, fear and apprehension, we find the example of an old wise man whose name is not recorded in the chronicles of history, in how he stood firm and believed in the promise of Allāh when it was perhaps difficult to comprehend. The incident in question that we come to know of is that on one occasion, the daughter of Mongolian leader, Hulago, was walking through the streets of Baghdad. She saw a man with a crowd around him and found out after enquiring with her guards that he was a knowledgeable person from the Muslims so she sought to set out to embarrass, bully and intimidate him. She proceeded to ask the man, “Are you Muslims not those who say your Allāh will make you victorious, supreme and inheritors of the lands?”

The old man responded by saying “indeed that is correct, it’s written in the Qur’an.”

Hulago’s daughter then stated “Well I am here today to prove to you that your Qur’an is fake because you are under our rule and we are the inheritors of the land. I can ask any of my guards to kill you right now as you are under my rule”

The old man then responded as follows: “Do you know that when shepherds go grazing, they take a few dogs with them – what is the purpose of those dogs?”

Hulago’s daughter responded, “When the sheep splinter and are disunited and go in different directions, the shepherd unleashes the dogs to keep the herd together”.