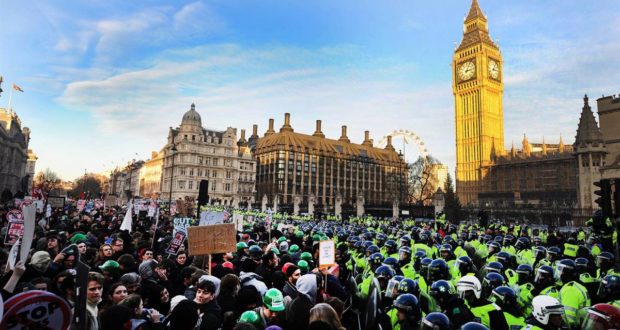 The government’s Prevent duty has come under fire again after it was revealed that King’s College London, one of Britain’s most prestigious universities, had warned its students and staff that their emails may be retained and monitored in accordance with the anti-terror programme.

Prevent is sold to universities as a safe and sensible method of clamping down on radicalisation on British campuses and promoting ‘British values’. In reality, it is a messy programme that promotes state censorship, chills academic freedom, attacks the relationships between teachers and students and dilutes some of the most fundamental British values. It weakens free speech and religious freedom. If students and academics want to maintain their freedom to listen and respond to different or difficult ideas, then they must resist Prevent.

In response to the monitoring revelation at KCL, a students’ union spokesperson described the scenario as a violation of trust, adding that “students who have not committed any crimes are being treated as suspects.” Here is the crux of Prevent’s problems. The culture of suspicion caused by the ‘suspects’ tag leads to a breakdown of trust between teachers and students. This risks damaging the effectiveness of counter-extremism. Muslim students who are learning about popular yet dangerous themes in the Islamic world – such as the belief that the world is divided into the Dar al-Islam (“House of Islam”) and the Dar al-Harb (“House of War”) –  will feel uncomfortable bringing their thoughts to teachers, fearing they will be flagged by counter-extremism measures. This blockage of mistrust pushes student discussions on ‘extreme’ content underground, where the access to other critical minds is unsatisfactory.

David Cameron, who was then Prime Minister at the time when Prevent duty was given legal footing, argued that educational institutions like universities have a responsibility to starve extremist ideas of “the oxygen they need to flourish”. Cameron and other Prevent supporters contest that extremism spreads through individuals interacting with radical thinkers or preachers. By doing so, they are guilty of the bigotry of lowered expectations. Central to the argument is the belief that students or young Muslims are incapable of listening to a radical imam’s hour-long speech without becoming incensed by violent, zealous rage. It is an infantilising argument.

British students are some of the best in the world. We are not propelled into an unstoppable frenzy of extremism upon contact with the invalid views used to support extremist positions. When British students are left alone to consider and debate important issues, they learn – they do not become extremists.

The government’s patronising rhetoric is central to Prevent’s application. Throughout the policy’s early days, government ministers dressed it up as being all about ‘safeguarding’. Several problems arise from this. Firstly, and most importantly of all, who goes to university to be ‘kept safe’ from different or difficult ideas? This is antithetical to the basis of education. As modern countries like Britain aim to reduce extremism in society, it is vital that we give the next generation of lawmakers, thinkers, writers and citizens the opportunity to hear and respond to those extreme ideas. How can we be expected to effectively confront extremism if we are sheltered from hearing its expression? How can we be brave enough to go after the intellectual inadequacies of extremism if our emails are being monitored for any traces of its presence?

I don’t pretend to be a higher-education expert but, as a student, I know that I am better served by a university administration that refrains from treating me like a suspect when my main interest is learning. I know that I will not fulfil my academic interests if I fear government repercussions for carrying out research.

Perhaps the most depressing aspect of the Prevent legislation is that it shows that our government agrees with the logic used by some students to justify ‘safe spaces’ and ‘trigger warnings’ for potentially upsetting content. Indeed, censorship on campus is hardly a unique phenomenon. Spiked’s free speech university rankings from 2016 revealed that speech is censored by student unions on 90 per cent of British university campuses. Hyper-sensitive students have rebelled against all kinds of speakers: from feminist academics like Germaine Greer to conservative Catholics like Timothy Stanley. However, Prevent expands campus censorship to levels that student snowflakes could only dream of. It attacks the ‘wrong kind’ of political speech via top-down directives with the threat of state force. It is a menacing threat to academic freedom.

Those who contend that students need to be sheltered away from some ideas must face another tricky question: who decides what counts as extremism? Should we hand over the academic freedom – the very basis of our university system – to judges or tribunals?

Students must ask themselves this simple question: who should decide for you what you can and cannot debate, Amber Rudd, or yourself? Those who consider themselves to be rational, moral agents must demand that the Home Office has no say in the free exchange of ideas on campus.

The Home Secretary is a graduate of Edinburgh University, where I currently study. Rudd graduated in the 80s, but I can assure her that Edinburgh students since her time have not lost the ability to confront different ideas. Many of us are keen to hear from Islamists, far-right extremists and radical populists. We want to pick apart bad ideas, not protect them through censorship.

Published by The Telegraph