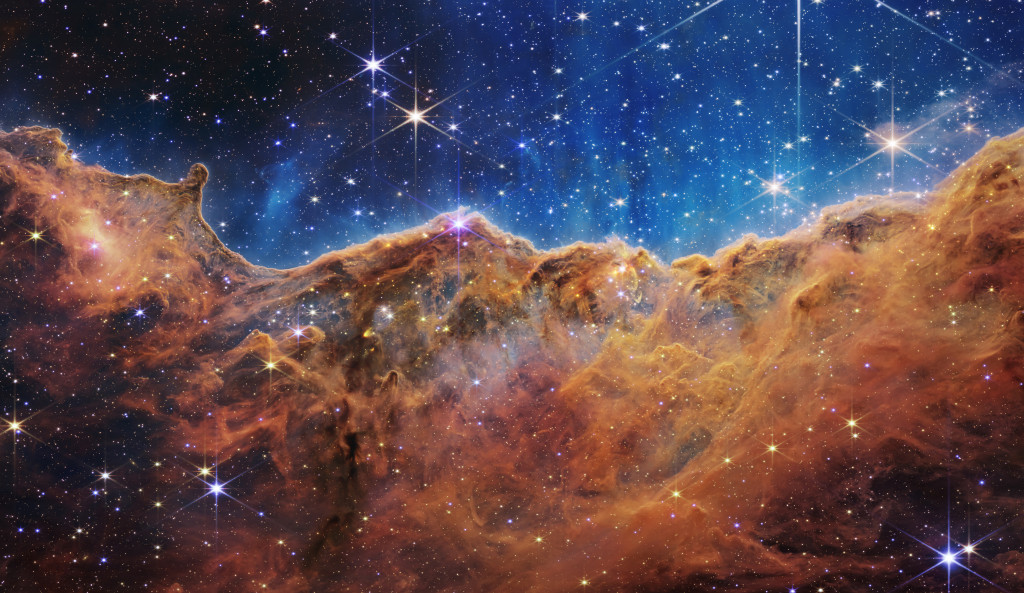 There are some concepts our minds will just never grasp. Eternity. Time. Consciousness. The Unseen. The bounds of the knowable and unknowable universe. How much are we expected to wrestle with these ideas that transcend the limited faculties we have been given, by design?

The latest images released by the James Webb telescope provides us with a moment of not just pause, but an opportunity to take stock of ourselves and our fleeting, vanishing role in the grand order of the cosmos. It’s not something that our lifestyle lends itself to. Most of our days are—despite best efforts—consumed on the immediate, inward demands; the routine, the responsibilities, the daily grind that feels like an inescapable fact of life. If we think wider than our homes, maybe it’s towards our extended family, neighbours and friends. If we’re involved and interested in the world around us, maybe we’re keeping up with the conflict and suffering around the world. How often though, do we consider the immensity of the cosmic order we are now momentarily part of? To think we are living on a patch of rock that is not even a speck upon a speck upon a speck of what we are currently able to access, let alone what actually exists.

For me, I was between brainstorming a new creative angle to appeal my latest parking fine and wondering whether shaving the cat’s fur might help it out during this heatwave. As I headed to Google to search up feline grooming, the images popped up.

The deep, deep, deep peering into the cosmos was laid out. Images sent by the most powerful telescope instrument ever built, orbiting around 1 million miles from Earth. Its position meant it could peep at some of the earliest galaxies and stars ever born. What followed was one staggering fact after fact, coupled with the aesthetic arrest of images of supreme beauty.

To begin, the ‘objects’  we are seeing are effectively us looking back in time billions of years, since that’s how long it takes for this ancient light to reach us (or more precisely, reach the $10 billion Webb telescope). The first batch of images included views of some of the most distant galaxies, a giant star nursery (who knew there was such a thing?), and colossal cosmic clouds. Closer to home, the telescope gave unparalleled insight into a giant planet beyond our solar system.

With a gold-tinted mirror over two-and-a-half times larger than its predecessor Hubble’s, the James Webb telescope has the ability to see much fainter objects, and can peer through previously impenetrable clouds of thick cosmic dust. This makes them the most anticipated space images ever and has enabled us to see extremely distant populations of galaxies.

One specific  galaxy cluster SMACS 0723 was captured as it appeared some 4.6 billion years ago. Behind it, however, are more ancient galaxies. To give a sense of perspective, the images that the James Webb telescope has captured is effectively a slice of the sky approximately the size of a grain of sand held at an arm’s length by someone on the ground.

Is it possible to even begin to comprehend this?

The telescope has revealed a trillion or more exoplanets in our Milky Way galaxy alone. And some of these planets, for example, might contain water, methane, and carbon dioxide, which could potentially mean they’re habitable worlds. Yet, we know vanishing little about them. To say we have only been able to scratch the surface is an understatement.

As believers, we have firm conviction there is precision, design, intentionality and purpose behind every single thing that has been created, and everything that hasn’t. If images from the James Webb telescope elicit such unanimous global joy and intrigue, how much more reverence should this evoke for the One who has fashioned this all? The sheer power behind creation like this is overwhelming to comprehend. What this tells us about ourselves too is a lesson in wonder, humility and adulation. We all fall prey to self-importance at times: ego rears its ugly head, nafsiinclinations rise to the surface and we overestimate regularly who and what we really are.

To really internalise that we are one miniscule flash of a moment in an eternal chain of humanity, set to the backdrop of a cosmos we cannot even try to comprehend should (pun intended) bring us right back down to earth. As we marvel at the One who put together these extreme celestial delights, let us also reconfigure our role here and now in this moment of life we have been gifted with by Him. These images not only remind us of the greatness of our Creator, but that He is One who loves beauty. He has spread stunning signs of His Magnificence in the prints of our fingertips just as He has in the dazzling, incomprehensible nebulae millions of light years away. Whatever we have of Praise, it will forever be deficient. Allahu Akbar.

Share. Facebook Twitter LinkedIn Email Telegram WhatsApp
Previous ArticleLessons from the University of Hajj
Next Article An Open Invitation to Jordan Peterson and the People of the Book