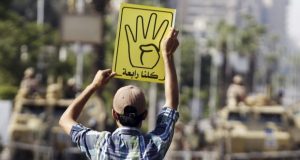 On this 14th of August, whilst one Muslim nation celebrates its supposed independence from colonial subjugation, Muslims of the world cannot help but remember another Muslim nation's cry for their own independence from subjugation. Ahmed Hammuda recounts one of the bloodiest massacres of unarmed protesters in recent world history, whose perpetrators are still at large... Never forget their sacrifice