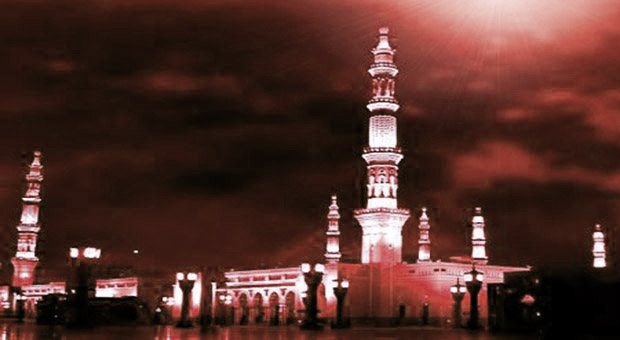 He (SAW) supplicated, while upon the pulpit, for the descent of rain when they asked him to at the time of drought, there was not a single cloud in the sky, then when he had supplicated, the clouds gathered like mountains and it rained until the next Friday.

The greatest of them was the Qur’ān, the manifest and clear miracle and brilliant proof; falsehood cannot approach it from before it or behind it. It is a revelation from One who is All-Wise and Praiseworthy. It incapacitated the most eloquent of people to produce ten chapters, or even a single chapter, or even a single verse that would be comparable to it. The polytheists were forced to acknowledge its miracle and the deniers had no course but to accept its truth.

The polytheists asked the Messenger of Allāh (SAW) to show them a sign and he showed them the splitting of the moon. It split in two halves[1] and is referred to in His, Most High, saying,

He (SAW) said, “Allāh drew the ends of the earth together for me and I saw its east and west. My nations shall reach all that was drawn together for me.”[2] Allāh caused his statement to come true for his nations spread east and west but did not spread north and south.

He (SAW) would deliver his sermons while leaning on a palm tree, when he took to the pulpit (minbar), the tree was heard giving a sound of mourning and kept doing so until he came and hugged it.[3]

Water gushed forth from between his fingers on a number of occasions.[4] Stones glorified Allāh while in his hand, and then he placed them in the hand of Abū Bakr, then `Umar, then `Uthmān, the stones all the while glorifying Him.[5] Food was heard glorifying Allah while in his presence, while being eaten.[6] The tree and the stone that greeted him with the salām.[7] The poisoned leg [of roasted sheep] speaking to him, all those who partook of it died immediately whereas he lived on for a further four years.[8] A wolf bore testimony to his prophethood.[9]

On one journey he passed by a camel, when the camel saw him, it made a rumbling sound and bent its neck down, he (SAW) said, “It complained to me of its heavy workload and little food.”[10] He once entered a washroom in which was a camel, when it saw him it let out a sound of mourning and tears filled its eyes, he (SAW) said to its owner, “It has complained to me that you leave it hungry and make it work continuously.”[11] He entered another washroom in which were two restless stallion camels whose master was unable to control them. When one of them saw him (SAW) it came to him and knelt down, he patted its nuzzle and gave it to its owner, he did the same with the second.[12]

On one journey, he was sleeping and a tree walked towards him until it stood by him. When he awoke, this was mentioned to him and he said, “That was a tree that sought permission from its Lord to greet the Messenger of Allāh with salām and He granted it permission.” He ordered two trees to come together and they did, then he ordered them to part and they did.[13] A bedouin once asked him to show him a sign so he ordered a tree to walk towards him, when it had come, he ordered it to return and it did.[14]

He wanted to slaughter six fat cows, and they all raced each other to him, vying to be the first to be slaughtered.[15] He touched the udder of a barren [and therefore dry] sheep, its udder filled with milk and he and Abū Bakr drank of it.[16] A similar incident also happened in the tents of Umm Ma`bad al-Khuzā`iyyah.[17]

He (SAW) returned the eye of Qatādah ibn al-Nu`mān to its place with his hand after it had slipped out, it ended up being the better of his eyes and it was said that it was not known which of the eyes it had been.[18] He spat lightly into the eyes of `Alī when it had become inflamed and it was cured almost immediately, it never became inflamed again. He (SAW) also supplicated for him when he was in pain; he was immediately cured and never felt that pain again.[19] The leg of `Abdullāh ibn `Atīq was incapacitated and he wiped it and he was cured immediately.[20]

He informed his Companions that Ubayy ibn Khalaf would be killed on the Day of Uhud, he received a minor scratched from which he died.[21] Sa`d ibn Mu`ādh said to his brother, ‘I heard Muhammad saying that he would kill you’ and he was killed on the Day of Badr as a disbeliever.[22] He told them the places where the polytheists would die on the Day of Badr saying, “This is the place of such-and-such a person tomorrow if Allāh wills,” and they all died exactly as he had said.[23]

He informed that a group of his nation would traverse an ocean and Umm Harām would be amongst them and this occurred.[24] He said to `Uthmān that he would be afflicted by a severe trial and he was later killed.[25]

He informed us that Hasan ibn `Alī was a sayyid and that he would reconcile between two large warring parties of the Muslims, and this happened.[26] He informed that Aswad al-`Ansī had been killed, the night he was killed, and by whom while the latter was at-Şana`ā’, Yemen. The same happened concerning the killing of Chosroes.

He said to Thābit ibn Qays ibn Shimās, “You will live being praised and you will die as a martyr” and he lived being praised and was martyred at al-Yamāmah.[27] He said about a person amongst the Muslims fighting alongside him, “he would be from amongst the denizens of the Fire” and later he committed suicide.[28]

He (SAW) supplicated for `Umar ibn al-Khaţţāb and he accepted Islām the very next day.[29] He supplicated that Allāh remove feeling the bitter cold and heat from `Alī ibn Abū Ţālib and never again did he feel cold or hot.[30] He supplicated that Allāh grant ibn `Abbās understanding of the religion and teach him the explanation of the Book,[31] he came to be called the ocean of knowledge because of his vast knowledge. He (SAW) supplicated for Anas that his wealth and sons increase and that he should live a long life and blessed life and it was so. He lived for about one hundred and twenty years, had one hundred and twenty sons, and his garden would yield produce twice every year.[32]

`Utaybah ibn Abū Lahab once harmed him and ripped his shirt so he supplicated Allāh that one of His dogs overcome him. He was killed by a lion at Zarqā’, Syria.[33]

He (SAW) supplicated, while upon the pulpit, for the descent of rain when they asked him to at the time of drought, there was not a single cloud in the sky, then when he had supplicated, the clouds gathered like mountains and it rained until the next Friday. It rained so much that they had to come back and ask him to supplicate and stop the rain, so he supplicated and the rain stopped and they walked out into the glaring sun.[34]

He fed the combatants of Khandaq, one thousand people, with a şā` of barley, or less, and one sheep. They all ate their fill and left, leaving behind them more food than they had started with.[35] He also fed the combatants of Khandaq with a small number of dates that the daughter of Bashīr ibn Sa`d gave to her father and uncle, `Abdullāh ibn Rawāhah.[36] He once ordered `Umar ibn al-Khaţţāb to feed four hundred riders with a small amount of dates, they all ate their fill and the dates had not even decreased in number.[37] He fed eighty people in the house of Abū Ţalhah with a few loaves of barley bread.[38] He fed an army of people from the food sack of Abū Hurayrah, he then gave the sack and what it contained back to Abū Hurayrah and supplicated for him. He ate from the sack till the time that `Uthmān was killed, after which he gave it away, and it is reported that it filled fifty camel loads in the way of Allāh, Mighty and Magnificent.[39] From a bowl of food gifted him by Umm Sulaym on the night of his consummation with Zaynab, he fed a large group of people. After they had eaten, they could not tell whether the food was more at the beginning or at the end.[40]

On the Day of Hunain he threw a handful of dirt at the disbelievers and Allāh, Most High, vanquished them, filling their eyes with dirt.[41] It is concerning this that Allāh, Mighty and Magnificent, revealed,

He was chased by Surāqah ibn Mālik who wanted to kill him, when he drew close he (SAW) supplicated against him and the feet of his horse sank into the earth, he called out asking for safe conduct and was granted it, then he asked the Prophet to make a supplication for him and Allāh saved him.[42]

He (SAW) has many clear and amazing miracles, we have sufficed with mentioning just these.

All praise and thanks are due to Allāh. Peace and blessings be upon our master Muhammad, his family and Companions.

Islam21c requests all the readers of this article, and others, to share it on your facebook, twitter, and other platforms to further spread our efforts.
[1] Bukhārī [#3636] and Muslim [#2802]