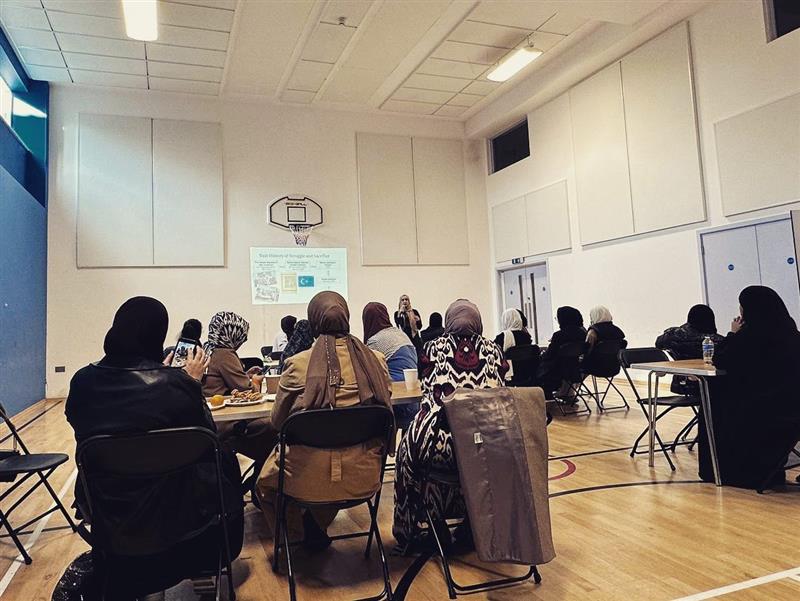 Over seven decades of oppression

It has now been 73 years that East Turkestan has been under the suppressive colonial occupation of the Chinese Communist Party (CCP). Since then, their clampdown on the Uyghurs’ calls for self-determination and independence has reached violent heights. Today, the CCP has turned the entire East Turkestan region into a highly securitised surveillance state. Religious, social, and basic human rights are severely curtailed, and Turkic Muslims are subjected to some of the world’s worst human rights violations and crimes against humanity, amounting to genocide.

I have summarised some of the general sentiments and reflections from this unique gathering, below:

The event opened with a powerful reminder about our allegiance to one another, a unique allyship built on serving and pleasing Allah alone. This bond supersedes that of nationality, culture, or tribe; it is a bond that transcends into the next life. Our identity is that first, we are Muslim, therefore we believe in the Oneness of Allah, and that the Prophet Muhammad (ﷺ) is His final messenger.

What might seem like a simple proclamation holds weight stronger than any other bond or agreement between a people. This alliance means that when our brothers or sisters suffer, this, too, is our suffering. When they are tested, we are also being tested.

So never should we think that we are too far to aid our brothers and sisters when they are in need. The East Turkestan cause is a cause of the Ummah, so in any capacity we can, we must support them against their persecution and oppression.

We had the honour of sitting amongst Uyghur mothers and daughters who have either directly faced the persecution or have relatives who have suffered. While these sisters bravely shared harrowing stories of the psychological, social, and sexual violence women face in the camps, they maintained an undefeated outlook.

Their dedication to preserving their honour and īmān through their deen was deeply striking. Through all the hardship and trauma, they have exercised beautiful patience and remained steadfast despite persecution. We pray that Allah hastens East Turkestan’s freedom and honours those who have sacrificed for His sake in this life and the next.

No deed is too small!

We may often see the state of the Ummah and feel overcome with sadness or feel insignificant in our contributions. However, the believer should never have a defeatist mentality, or think that the end justifies the means. Allah (subḥānahu wa ta’āla) is العليم (the All-Knowing), He recognises the smallest of our deeds and knows the state of our hearts when doing them.

It is from the tradition of our Prophet (ﷺ) that when we see an evil thing, we should change it with our hands, and if we cannot do that, then with the lowest form, which is to reject it with our hearts. [1] Islam most perfectly encapsulates standing firm for truth and justice in the face of oppression, and it is these values which drive us to serve the Ummah and strive in the way of Allah.

A sister reflected on the Srebrenica genocide, and told a story of an elderly woman who supported the Mujāhidīn in Bosnia against the Serbs who were carrying out mass killings of Bosnian Muslims. Her contribution was that she would stand near the trenches and give out cups of tea to the men who would go and defend their people and fight for the sake of Allah.

What may seem like a small deed may actually be weighty in the sight of Allah, bi ithnillah. This was her Jihad. We should also not see any deed as too small, whether it is organising small gatherings where we remember and speak about the plight of Uyghurs, raising awareness on social media platforms, or large political campaigns lobbying the government to take action. It all makes a difference in the sight of Allah. Allah is the One who will free East Turkestan and it is to Him we will return and to Him that we will answer.

We ask Allah to free our brothers and sisters in East Turkestan and all over the world from persecution, and honour them in this life and the next. We ask Allah to guide us and aid us in being a means of benefit to the Ummah.

Head over to Stand4Uyghurs.com and support the campaign.