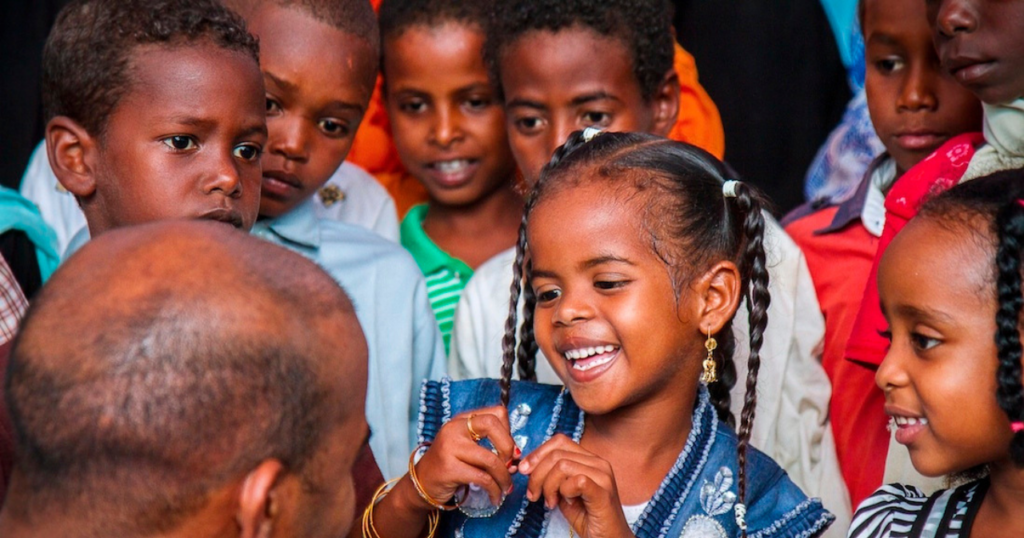 Ethar Relief is a UK-registered charity established to help refugees, displaced and disadvantaged people in the Horn of Africa. It was set up more than a decade ago by former refugees from Eritrea who were liberated from refugee camps in East Sudan. Today, in addition to providing aid and a comprehensive programme of development projects, Ethar Relief strives to raise awareness of refugees in the region, who are considered to have been forgotten by the international community. The UN Refugee Agency says that international aid for the vast number of refugees that flee conflict in the region is inadequate, and much more needs to be done to avert the ongoing humanitarian crisis in East Africa. [1]

Intisar is one of the thousands of children born into refugee camps in East Sudan every year. Life in refugee camps, in this part of the world, is extremely hostile; children in particular never know a normal life, and are unaware of the meaning of a normal childhood. For them, life means struggle, hardship, pain, hunger, illness, danger, and humiliation – with no hope of escape. This has a profound effect on their development in all areas of life and can have severe long-term consequences, for them and their families. [2]

A Start no Child should Endure

We met Intisar when she was 11 years old, as part of an Ethar Relief initiative to reach out to orphaned children in refugee camps. At such a tender age, the fragile world around her had already collapsed, and she had suffered from the most terrible trauma. A few years earlier, she had lost her mother to a simple sickness. Due to her young age and the complete lack of medical care available, Intisar does not even know the name or nature of the illness that took her mother, however, these sicknesses are some of the most common causes of preventable deaths in Sudan’s refugee camps. Her father, who was living elsewhere in order to find work and send back provisions for the family, returned home immediately to be with his children. However, within six months, he was dead too, taken by a similar illness that ravaged the camp.

The Devastation of Loss

Intisar and her siblings were alone and very vulnerable. Children are the most vulnerable members of the refugee community, with orphans at risk of all kinds of exploitation, danger, and disadvantage. Girls like Intisar are in the highest possible category of risk and need urgent protection from the most horrific abuses. Furthermore, there is no capacity within the refugee camp environment for sympathy, mourning, or recovery from loss. Children who lose loved ones are still stuck in an endless struggle for the basics of survival, and have no time or opportunity to grieve, nor anyone to turn to in times of emotional vulnerability. The refugee camp has no compassion and no mercy.

Social and cultural conventions in the camps, and society at large, place a large amount of importance on the presence of a male within the family structure. This is considered a form of protection for families in a hostile environment, as well as a source of prosperity and income. Intisar and her sisters had hoped that their younger brother might grow up to help provide food and security for their small family, in the absence of both parents. However, within a year of their father’s death, Intisar’s brother was also gone — yet another life taken by disease.

The story of Intisar’s life, thereafter, is one of unimaginable hardship, risk, and danger. Intisar and her three sisters found themselves migrating from one refugee camp to another. At each stage, no one was able to help them, but plenty tried to exploit them. Intisar, herself, became injured and sustained severe damage to her leg due to weakness, malnutrition, and the debilitating effect of the environment around her. As the sisters grew up, trying to find safe and suitable accommodation for unaccompanied teenage girls in the refugee camp proved impossible. When Ethar Relief found them, they were at the lowest point of their lives.

A Ray of Hope

Ethar Relief, as a charity with its own staff on the ground in East Sudan, was in a position to take responsibility for Intisar and her siblings and monitor their ongoing progress. This was achieved through public donations and sponsorships to its Orphan Sponsorship programme. Ethar arranged for the safe accommodation of Intisar and her sisters in Wadi Sharifeh, paying for a foster family to take in the girls and look after them. Intisar was also flown, by Ethar Relief, to Cairo for treatment on her injured leg. As a result, her leg is better than before and has a less disabling effect on her day-to-day activities.

Progressing towards a Normal Life

Now 16 years old, Intisar has a home, a foster family, and access to Ethar’s education and healthcare programmes. What we have managed to do for these girls does not erase the trauma they have been through, but it can contribute towards a better future than most refugee children could ever imagine. Ethar Relief has secured sponsorship for a small plot of land upon which Intisar and her sisters can build a small house to live in when they transition to adulthood. Furthermore, Ethar Relief’s Women Development programme provides opportunities for women of all ages to gain skills suitable for employment, in order to empower them and provide an alternative to some of the unjust systems that disadvantage them.

Intisar and her sisters are starting to repair their lives and recover from their experiences. We hope that they keep smiling as they start to feel the dignity of a stable and safe life, as well as the light of opportunity that guides them out of the refugee camp in the future. However, we remain bitterly aware that for every story like Intisar’s, there are countless children who escape the notice of charities, NGOs, or anyone else who can help.