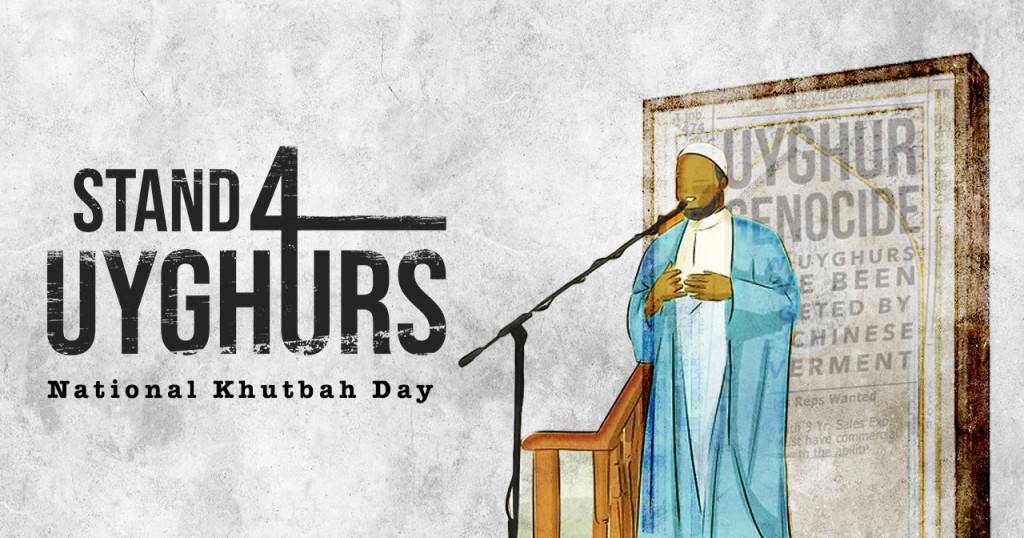 “While they were beating me, I cried out ‘Ya Allah!’. This made them beat me even more, mocking me saying ‘Go and find your god!’”

These are the words of your sister, Zumrat Dawut, describing what happened to her in a concentration camp in Chinese-occupied East Turkestan, which China calls Xinjiang. She was one of the many brave Uyghur women who gave evidence at the recent Uyghur Tribunal held in Westminster a few weeks ago.

The case of this sister is a very important and empowering lesson for us all, that will become clear in a moment.

You see, many of us are aware of the genocide taking place against our Uyghur brothers and sisters. Concentration camps, forced labour, hair and organ harvesting, child-separation, forced sterilisation, torture, rape, mosque demolitions, burning Qur’ans, atheist indoctrination camps… the list goes on. Academics, rights groups and journalists have been shining more and more light on the genocide of the Uyghur people and their Islamic identity in the last few years.

But one of the biggest obstacles to helping our Uyghur brothers and sisters is the feeling of powerlessness that Shaytan tries to instil in us. What can we do against a growing superpower? How can anyone stand up to China?

The important lesson in the story of sister Zumrat Dawut is what one man did to help her. While she was being tortured in a concentration camp for over 60 days, her husband, who is a Pakistani citizen, threatened Chinese officials that he would go to the media. And guess what—she was released.

This is a lesson in the power that all of us hold, but most of us don’t realise.

The senior figures in the Uyghur movement for justice have constantly mentioned one thing: that the Muslims—particularly in Europe and North America—have an incredible amount of power and influence when it comes to helping Uyghurs.

In this khutbah I’d like to highlight a few examples of how we can help our Uyghur brothers and sisters, but the first step is for us to realise that Allah has given us an incredible amount of potential for positive change, we just need to be motivated enough to use it, and coordinated enough to use it wisely.

No Muslim should say: “I’m just one person. What can I do?”

Firstly, because it ignores our primary objective on this earth: as a test. We are not in charge of the outcome, but ensuring that we act correctly and sincerely for Allah.

“Why do you advise [or warn] a people whom Allah is [about] to destroy or to punish with a severe punishment?”

What’s the point? Why are you wasting your breath when Allah will destroy the wrongdoers? Their answer should be engraved in our hearts, because that is the basis for our activism and da’wah in many areas:

“To be absolved before your Lord and perhaps they may fear Him.”

When injustice happens, it is a test for all of us onlookers as well, and our primary objective should be to pass that test. This is why the Prophet ﷺ said:

There is no fourth option for the believer – to ignore it because he is unable to change it. Like the heroes in the story of Bani Isra’il, our primary objective is “to be absolved before your Lord”, so that on the Day of Judgement, we can say that at least we tried doing that which was in our ability. And, “perhaps they may fear Him”; meaning, perhaps we may achieve our desired result—because that is what we want after all. But that part is up to Allah.

That’s the first reason no Muslim should say “What can I do? I’m just one person.”

The second problem with the statement is that it is patently false—even if you are one person, like the husband of sister Zumrat Dawut, you CAN make a difference.

“There are THOUSANDS of these things, do you think you’re going to make a difference? Hah!”

The man pauses for a moment, picks up another starfish and shows it to the onlooker before throwing it back into the water, saying:

“I made a difference to that one, didn’t I?”

The dumfounded onlooker had fallen prey to the perfectionist fallacy; another trick of Shaytan (and our nafs) to deactivate us, and prevent us from doing all types of good deeds.

In other words, just because you cannot fully solve a problem, it doesn’t mean you’re not supposed to work towards the solution. Allah will not ask you, a shopkeeper in Bradford or an Uber driver in Balham, why you did not liberate Palestine, for example, since doing that was not in your sphere of influence. But He may, on the other hand, ask you why you didn’t speak to your local MP about it, or raise awareness to your circle of influence, or donate some of your wealth to help their cause, and so on.

“Allah does not charge a soul except [according to] what He has given it.”

When asked by the companions how this was, he ﷺ explained that a man with two dirhams giving one to charity is more beloved to Allah than a millionaire giving away 100,000.

Why is this? Because it all belongs to Allah in the first place – Allah is testing us, and judging us according to our potential ability, not necessarily absolute measurements.

But the scary thing is that this works for sin and punishment as well. This is shown in the hadith of the Prophet ﷺ where he said:

“There are three that Allah will not speak to on the Day of Resurrection, He will not purify them, or even look at them, and for them is a painful punishment: an elderly adulterer; a lying king; and an arrogant pauper.”

Can you extract the common feature between these three types of people?

As the scholars of Islam have highlighted for us, these are people who do not have the same lure and inclination for particular sins as others; almost as if they went out of their way to carry out a sin due to the corruption of their souls. An old man has much less passion and desire to commit zina; a pauper has very little to be arrogant about; and a king doesn’t need to lie to anyone.

Why are we mentioning this?

Imagine how angry you get at those Muslim rulers or politicians or influential people who do not do things like help our Uyghur brothers and sisters, who don’t speak out on their global platforms and rally others to do the same. You might call them traitors, hypocrites, and so on. Now imagine that you and they were raised together as equals on the Day of Judgement!

It is a terrifying thought, but one that could very well happen if we do not do that which is in OUR ability to help our brothers and sisters—even if we might think it materially small. The One who is judging us knows exactly how much ability we have been given.

But remember, the opposite is also true: if you carry out 100% of what is in your ability, even if that amounts to doing one hour of focused work on a particular deed, or donating £1 to a cause, it may be that Allah resurrects you as an equal of the great heroes of the past who liberated entire peoples or spent millions for the sake of Allah.

With that in mind, the fact that we should not belittle any effort done sincerely however small, what are some of the things we can do for our brothers and sisters suffering genocide?

Today, mosques all over the country are talking about the same thing. The community is coming together for the Stand4Uyghur campaign to channel people towards effective action for the Uyghurs.

The launch of this campaign is a demonstration of solidarity next Thursday, 1st July outside the Chinese embassy from 5-8pm, inshaAllah.

That day is hugely symbolic for the Chinese regime, who are celebrating their 100th anniversary on that day, and our Uyghur brothers and sisters want us to show our presence there in a display of moral support and solidarity for them.

One of the most poisonous whispers of Shaytan is when he comes to suffering Muslims and tells them that the Ummah has forgotten them. Many criticise those who do not do enough for our Uyghur brothers and sisters – well this is our opportunity to spend just a few hours out of so many that Allah has given us, to exercise our freedom to speak out and stand in solidarity and give moral support to our Uyghur brothers and sisters, as well as publicly condemning an evil with our tongues, as per the Prophet’s ﷺ command mentioned earlier.

This is the first thing we can all do – give moral support. Never underestimate the power of doing this. Even Allah gave moral support many times to the Prophet ﷺ when he was being persecuted and attacked:

“Nūn. By the pen and what they inscribe,

You are not, [O Muhammad], by the favour of your Lord, a madman.

And indeed, for you is a reward uninterrupted.

And indeed, you are of a great moral character.”

As well as the physical display of moral support, we can also show moral support electronically, via messages on social media and helping raise awareness of their plight, and this is the next thing we can all do.

Let us all make a commitment to share information about our Uyghur brothers and sisters at least once a day, for example, depending on how active you are in the community or on social networking sites.

The third thing we can all do right now is make du’a for Allah to protect our Uyghur brothers and sisters, and their Iman, which has been under attack for decades. Look for strategic times throughout the day when du’a is more beloved to Allah, such as on Friday, the time between the adhan and iqama, when fasting, when travelling, in the last third of the night, and so on.

May Allah support our Muslim brothers and sisters in East Turkestan, forgive us for our shortcomings towards their rights, and awaken and empower our Ummah to stand up for them.

The campaign that is launching on the 1st July will contain many more examples and resources for action that we can all take inshaAllah, including lobbying politicians, public bodies and public figures, donating towards legal action against Chinese officials, severing ties between Chinese state-run companies and the universities that are developing and sharing the technology being used to oppress Uyghurs, and much more inshaAllah.

We all have an opportunity to show our Uyghur brothers and sisters that we will not remain silent while people lock them up in concentration camps, harvest their hair and organs, force them into slavery, torture them, and much worse than can be mentioned while our younger brothers and sisters may be listening here.

We will not sit silently but turn out in our numbers inshaAllah, on the 1st of July to show our solidarity and our moral support to them.

Do not underestimate the power of sincere deeds that may be small in the materialistic sense; remember that our primary objective is to please Allah and be absolved of blame when we meet Him. 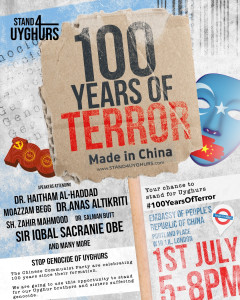 Do you want to join our volunteers team for even more reward? Email us at [email protected]