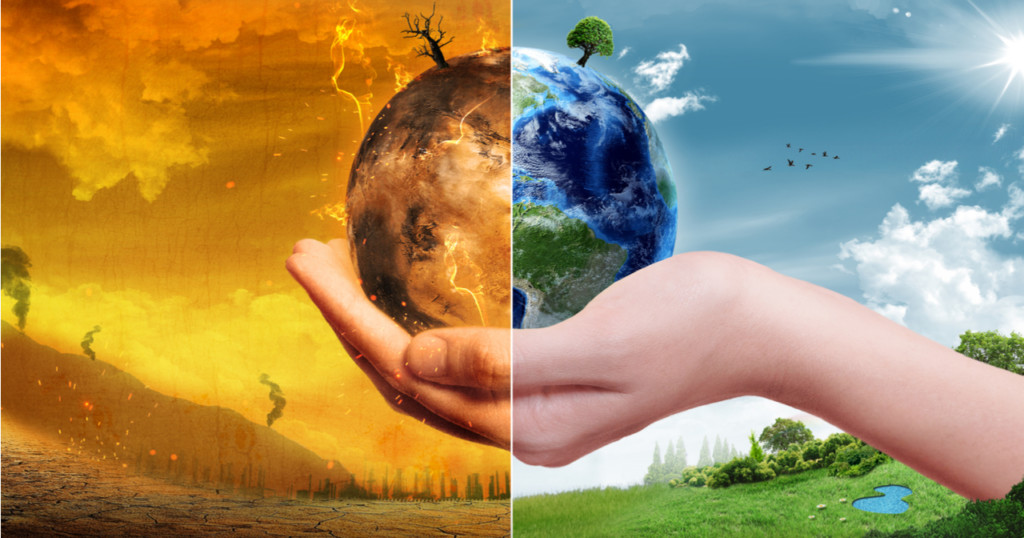 Over the last few weeks, Extinction Rebellion has conducted a series of protests across London­­­. These acts of civil disobedience have aims of raising awareness and focusing minds, particularly of those in power, on the devastating effects of climate change, hoping to avert, what they term, “climate catastrophe”.

In what may be the largest coordinated act of civil disobedience in modern British history, protests occurred across the capital, including a “die in” at the Natural History Museum. To date, over 1000 protestors have been arrested, surpassing the number arrested in the anti-nuclear protests in 1982 (752) and the poll tax riots of 1990 (339). [1]

Social commentators have suggested that these protests are very different from other single-issue demonstrations because the protestors are calling to action in order to — as they see it — save humanity, rather than for a personal or community-based gain.

Roger Hallam, founder and organiser of the Extinction Rebellion movement that advocates non-violent civil disobedience, confirmed that no police officers had been hurt in the peaceful protests.

“We’re hoping that the political class wake up, because if they don’t the next thing that will happen will be much more dramatic.” [2]

What is climate change?

1°C may not seem like much, however, in global terms, when we consider the amount of energy needed to warm the oceans, the atmosphere, and the land by one-degree, it becomes significant. Indeed, if we consider that it took only a one or two-degree drop to plunge the Earth into the Little Ice Age, then the thought becomes a more sobering one. [4]

What are the causes of climate change?

The earth is getting warmer; of that, there is no doubt. Some have argued that this is a natural variation, however, the preponderance of evidence [5] points to the fact that it is due to human activity. Broadly speaking, climate change is caused by the increase in greenhouse gas emission and large-scale deforestation.

As we all learnt in school, sunlight passes through the Earth’s atmosphere and warms its surface. Ordinarily, this heat is radiated back to space. However, most of this heat —as much as 90% [6] — is absorbed by greenhouse gas molecules and then re-emitted in all directions towards the Earth. In simple terms, we can understand these greenhouse gases as a blanket over the Earth. Greenhouse gases primarily include water vapour, but also include carbon dioxide, methane, and nitrous oxide. This has, as a result, caused climate change.

Furthermore, the burning of fossil fuels, such as coal and oil, has increased the concentration of carbon dioxide in the atmosphere. Another cause is mass deforestation.

Allāh (subḥānahu wa taʿālā) created a perfect world in beautiful harmony. One very simple example is that the oxygen we need to live is produced by trees, whilst these same trees take our ‘waste product’ of respiration — namely, carbon dioxide — and produce oxygen with it via photosynthesis. Tragically, as a species, we have not heeded the words of the Prophet (sall Allāhu ʿalayhi wa sallam), who said:

“Take care of this Earth for she is your mother. No one does good or evil on her except that she will speak of it (on the Last Day).” [8]

The resultant mass deforestation, especially in tropical rainforests, has produced an increase in greenhouse gases by 24%. [9] One of the largest reasons for deforestation is palm oil production. At 66 million tons annually, [10] palm oil is big business. We all use it. It is found in foods, cosmetics, cleaning products, and fuels. Day after day, large areas of rainforests in South East Asia and Africa are decimated in order to make more palm oil plantations. This act of deforestation alone releases carbon dioxide and reduces the Earth’s ability to transform carbon dioxide into oxygen.

Is climate change a hoax?

There are, of course, those who claim that the Earth’s temperature rise is a natural variation and not a result of human activity. They are supported by notable intellectual giants like the American president, Donald Trump, who in piercing insight tweeted in 2014:

However, it is reasonable to suggest that the changes in the Sun’s energy may also cause the climate to change, given it is the source of energy that drives our climate. It is thought that a decrease in solar energy together with volcanic activity triggered the Little Ice Age. However, since 1750, the amount of energy coming from the Sun has either remained the same or decreased slightly. If warming was coming from the Sun, we would expect to see warming at all levels of the atmosphere. Yet, what is observed by scientists is cooling in the upper atmosphere and warming in the lower parts of the atmosphere. [11]

What are the effects of climate change?

There is growing evidence that suggests climate change is responsible for the extremes in weather that we have seen over recent decades, from heatwaves, to flash floods, and to droughts. According to Carbon Brief’s analysis, 68% of all extreme weather events studied to date were made more likely or more severe by human-caused climate change. Out of the 68%, heatwaves accounted for 43%, droughts made up 17%, and heavy rainfall or floods accounted for 16%. [12].

Climate change can even have an effect on nature, with an example being the loss of biodiversity. Currently, there is a 1.0°C rise in temperature, but if this were to increase to 1.5°C, 20 to 30% of species would be at risk of extinction. According to WWF (World Wide Fund for Nature), “if the planet warms by more than 2°C, most ecosystems will struggle”. [13]

The impact of climate change is intensified in polar regions, with average temperatures in the Arctic increasing significantly over the past century. The resultant melted glaciers and thermal water expansion have increased sea levels. By the mid-century, it is expected that the Arctic Ocean will become ice-free during the summer [14], with global sea levels due to rise by 1 to 4 feet by the end of the century. Rising sea levels are causing loss of land and forcing people to migrate. One such example is in Louisiana, America, with communities of colour most affected. With a rapidly rising sea level, residents have been given federal help to relocate inland. [15]

However, it is the developing world that is most at risk of climate change and yet, they are the least able to prepare for it. Sadly, but unsurprisingly, the countries who hold the greatest responsibility for climate change due to their use of fossil fuels — China, USA and the UK — pay only lip service to the issue. Just last week, Liam Fox, British Secretary of State for International Trade, was accused of being a climate change denier. [16] This followed Prime Minister May non-attendance at a meeting with 16-year-old climate activist Greta Thunberg. [17]

The Middle East is a volatile region with wars in Syria, Iraq, Yemen, and Libya. At a conference in February 2019, academics warned that climate change would create food scarcity and water shortages, which would thus lead to displaced people and potential wars. [18] We can already see a water war of sorts occurring between the Zionist State and Palestine in Gaza. As reported in the Independent:

“Rights groups say 25-year-old, out-of-date water agreements with Israel effectively sees it hinder the building of Palestinian water infrastructure while siphoning off water resources to its own citizens, who enjoy in some settlements in the West Bank four times the amount of water Palestinians do.” [19]

There are many challenges we face today, including illegal wars to usurp the natural resources of the developing world; third world debt; propping up of dictators; corrupt governance; shadowy lobbyists; and media monopolies. Climate change is interlinked to each, whilst at the same time, is arguably the greatest challenge we face as a species.

If it was not for America’s greed and an insatiable appetite for cheap oil, the two Gulf Wars might not have happened, and one million children might not have starved to death with the despicable Oil-for-Food Programme. In turn, oil might have been more expensive, and it might have been used less, producing less carbon dioxide. Energy companies might not have become the behemoth they are with revenues in the hundreds of billions of dollars. In turn, their influence on government policy might not have been as significant. Those countries who are now most vulnerable to climate change — were it not for crippling interest rates — might have been in a financial position to better prepare for the effects of climate change. As for the media empires that seek to confuse the public about climate change and promote a right-wing agenda, they would be less able to do so with a less pliable government.

There is no simple solution; whatever we do as individuals can only touch the sides, as laudable as they are. What is needed, however, is radical thought and political conviction. Unfortunately, we have political leaders who either are enthralled to multinational companies or accept donations from questionable sources, such as the £875,882 given by Lubov Chernukhin, the wife of a former minister for Russian President Vladimir Putin. [20] Other instances include the donations from Tullow Oil or from Chief Executive of BP, Bob Dudley – an American citizen. [21] These oil and gas companies make eye-watering sums of money, with Exon Mobil having annual revenue of 279 billion dollars. Why can there not be a heavy tax placed on these companies, whereby the revenue can be used to help fight climate change? Or, in the alternative, why not treat them like tobacco companies and launch class action lawsuits against them?

Ultimately, what is needed is to challenge capitalism — To confront the notion that human happiness can be measured by GDP; to question whether the purpose of life is to be more than a till receipt; to ask whether those box-fresh trainers or brand spanking just made in China’s zombie factory iPhone is enough to fill that void within the soul or whether it yearns for something more.

As directed by the Qur’ān, it is upon the Muslim nation to be at the forefront of tackling climate change, after all:

“And [mention, O Muhammad], when your Lord said to the angels, ‘Indeed, I will make upon the Earth a viceroy.’ They said, ‘Will You place upon it one who causes corruption therein and sheds blood, while we declare Your praise and sanctify You?’ Allāh said, ‘Indeed, I know that which you do not know.’” [22]