The Woman with the Shy Walk 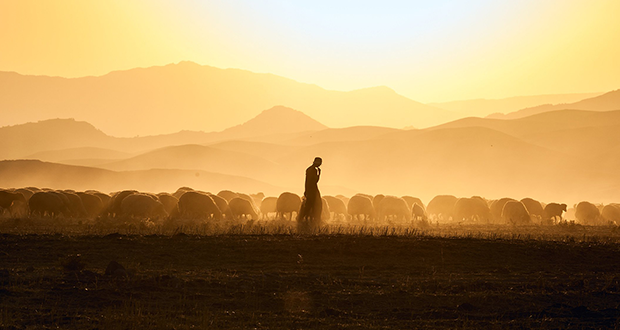 Hot, hungry, thirsty, and fearing for his safety, the Prophet of Allāh Mūsa (ʿalayhi al-Salām) arrives to the city of Madyan. Chased by the Pharonic police of the time, following the innocent killing of a member of the elite Coptic community, Mūsa (ʿalayhi al-Salām) has fled from Egypt enveloped in a state of fear. Gone are the days of luxury and comfort in the palace of the Pharaoh. Now Mūsa (ʿalayhi al-Salām) finds himself away from home, desperate and dishevelled, surrounded by unfamiliarity, hoping and praying for guidance and protection from his Lord.

Having settled briefly, still suffering from fatigue and overwhelming thirst, Mūsa (ʿalayhi al-Salām) comes across a water-well used by local shepherds to water their flock. On closer inspection, Mūsa (ʿalayhi al-Salām) finds a group of men watering their flocks from the well, but perhaps more surprisingly, he also notices two women keeping themselves to one side, waiting for these shepherds to finish so they can provide for their own flocks.

On completion of this charitable deed, Mūsa (ʿalayhi al-Salām) then retreats to the shade, protecting his drained body from the sapping heat, and in a private moment with his Lord, says “My Lord, I am in need of whatever good you bestow on me.”[1]

The story goes on, and eventually Mūsa (ʿalayhi al-Salām) ends up marrying one of these two women before embarking on his challenges with the Pharaoh and the children of Israel.

So, Why mention this story?

The story of Mūsa (ʿalayhi al-Salām) covers many pages of the Book of Allāh, with details of his story explained more in depth than that of many other stories of the Prophets of Allāh. From his earliest days as a baby placed in a basket to contend with the forceful currents of the river Nile, to his time with the Children of Israel and all the challenges he faced both with and from them, Allāh (subḥānahu wa taʿālā) provides us with vivid descriptions of Mūsa’s (ʿalayhi al-Salām) life story. This particular passage of the story, narrated in Sūrat al-Qasas, is one of many such examples. But are these details of any relevance? Do they add anything to our overall understanding of Mūsa’s (ʿalayhi al-Salām) story?

In order to answer this question, we must appreciate the status the book that is relating this story. A book whose verses are protected and explained in detail, from the all-Wise, Well-acquainted Lord of the heavens and the earth. A book that, if it were to be revealed on a mountain, “you would have surely seen it humbling itself and splitting asunder by the fear of Allāh.” A book in which there is ‘no doubt’, and to which “falsehood shall not come to it from before it nor from behind it; a revelation from the Wise, the Praised One.”[2] A book revealed by the One, and only Lord of the Universe, Allāh (subḥānahu wa taʿālā), who created, legislated and ordained everlasting pleasure for conformity and sincere obedience and painful punishment for defiance and disobedience.

Having appreciated the importance of every single word of the Qur’ān, one can now perhaps reflect more appropriately on the portion of the verse describing the walk of the woman towards Mūsa (ʿalayhi al-Salām),

“Then one of the two women came to him walking bashfully. She said: My father invites you that he may give you the reward of your having watered for us…”[3]

An honest student and disciple of the Qur’ān however would accept that every word used by Allāh in His book has been perfectly positioned, with each verse filled with linguistic eloquence matched by no other book ever read by man.

But what about that walk?

The sense of shyness and humility we get from this woman is something for the Muslim to reflect on. In an era where such shyness or introversion is seen in some quarters as a possible manifestation of anxiety, lack of self-confidence, or even a social disorder, taking a moment to reflect on why Allāh chose to mention this noteworthy trait of these women is of great benefit.

A simple “Google” search reveals the characteristic of shyness being associated with apprehension, awkwardness, low self-esteem and so on; characteristics that any individual of integrity would want to avoid. But as Muslims, do we see shyness in the same way? If Allāh (subḥānahu wa taʿālā) chose this word to describe this woman as she walked towards Mūsa (ʿalayhi al-Salām), did He mean it in a complimentary or blameworthy manner? Is it bad to be shy?!

Furthermore, we hear that the exalted character of the beloved Prophet (sall Allāhu ʿalayhi wa sallam) was described to be “more shy than a virgin in seclusion.”[4]

In an age where arrogance, immodesty, brashness and sometimes outright disrespect can be often looked upon fondly by some, the sincere Muslim remains firm in the knowledge of what characteristics please his creator. The young Muslim boy who emulates his favourite footballer’s ‘cocky’ traits, or the young Muslim girl who sees the ‘prettiest’ women on TV as those who wear very little and show far too much, or even the highly qualified Muslim academic who holds an esteemed position, or the affluent and successful Muslim businessman who is blessed with great riches and wealth, must remember that modesty and humility is an honour for the true slave of Allāh. Never should a Muslim feel that being humble will hamper their progress in this pretentious world. Rather our focus is on our hereafter, attributing importance to that which will lead us to gardens of bliss and delight. Social vices such as outlandish dress sense, vulgar language and sexual openness and obscenity unbecoming of human beings, all combine to make that ‘shy’ trait even more difficult to hold on to. Very rarely does the media present to us a humble role-model for us to look up to and learn from. Shyness is slowly becoming that ‘black sheep’ characteristic.

Amongst all of these tribulations, the Muslim holds firm to his faith, and the characteristics it brings with it. The Muslim is humble yet firm, concise yet polite, modest yet confident, and shy yet totally and utterly content. As related to us by the best of all creation, Prophet Muhammad (sall Allāhu ʿalayhi wa sallam), “if you do not have any shame, do as you wish!”[5]

So the next time we have the inclination to be boastful, to reveal more of our bodies than what Allāh (subḥānahu wa taʿālā) has given permission us to, or to be condescending and crass in our behaviour towards others, just remember how Allāh praised that lady’s walk and look to your heart and think, “do I want to be of those that Allāh praises on the Day of Judgement too?”

May Allāh grant us the blessing of embodying these beautiful traits and save us from that which incurs his wrath upon us. Āmīn.