On the passing of Hafiz Patel Saheb, a pioneer of Da’wah and the UK Tabligh 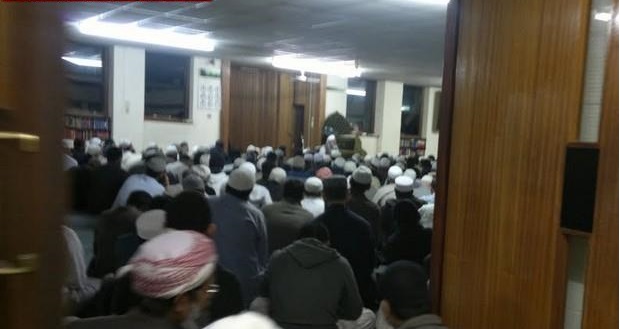 Last night our prominent Jamāti Sheikh Hafiz Patel Saheb passed away at 92 years old. Hazrat Hafiz Patel Saheb was one of the early migrants to the U.K. in the 1960s. He was one of the pioneers of the work of Da’wah and Tabligh in the U.K. In the early days of establishing the work, he would often walk to people’s homes in the snow calling them to the Masjid for Salāh. He was appointed the Amīr of the Tabligh Jamāt and remained as such until his death.

His first position was as Imām at Saville Grove Masjid, a position he shared with his co-Imām, Moulana Yaqub Kaawi Saheb. Hafiz Saheb would teach at the Madrasah as well, but his main focus was always Tabligh. In 1978 the new Markaz in Dewsbury was constructed and in 1985, with the efforts of Hafiz Saheb, a Darul ʿUlūm was also founded along with the Markaz.

Hafiz Saheb’s dedication for Tabligh was unique in his time. If one was to sit with him for even a few minutes, all one would hear would be Khurūj, Fikr for the Ummat, how Sahābah left their homes for Dīn, and sacrifice for Allāh’s Dīn.

Hafiz Saheb spent most of his time outside of the country than inside it. He never tired of traveling for the sake of Dīn. Wherever he went, people would flock to him and listen to his simple but penetrating words of advice.

Ansari Saheb who was his Khādim in many of his travels, especially  during Ḥajj and Umrah, says that he would get up very early for Tahajjud and would cry profusely while making Duʿā’ for the Ummah. An amazing aspect of his Duʿā’ was that he would make Duʿā’ for whoever had done him a favour, going through a long list of names during his Duʿā’.

Our community greatly feels the loss of such an esteemed du’āt, with his students recounting memories of his impeccable character and the closeness they felt toward him:

He would walk from Dewsbury to Bradford every day, give Dawah, get spat at just so that we could have the comfort of practicing the Deen easily today… He loved youth and said the future of the Deen relies on them.. I still remember when he kissed me on my forehead and gave me his kind words and advice. He emphasised the blessed night of Thursday and Allah took his soul on this night too! May Allah elevate his rank in the next life, forgive his sins and accept all his noble efforts. Ameen. – Luqmaan Al Hakeem

I still vividly remember the many occasions while I was studying in Dewsbury when Hazrat Hafiz Patel Sahib رحمه الله would call the foreign students to his room, he would give us naseehah, encourage us to take part in the noble work of ‘dawah’ and when he would finish his naseehah and words of wisdom to us he would then say,
“As you have made sacrifices and left your home, your family and your parents to come and study the knowledge of Deen and as you have no parents here this is a small gift from me to you, Hazrat Hafiz Sahib رحمه الله would then gave us Halwa or any other sweets that was present at that time”.

The love, kindness and generosity of Hazrat Hafiz Patel Sahib رحمه الله to us was a great lesson for us.

InshāAllāh, every life touched, and every person guided through the efforts of Hafiz Saheb will serve as Sadaqah Jāriyah for him. It is at the time of death and afterwards, that the true believer begins reaping the reward of all he has sown in this life. Allāh’s Messenger (sallAllāhu ‘alayhi wasallam) said,

Death is a gift for the believer.[1]

Edited and Adapted from an article written by Shaykh Abdul Rahim Saab.