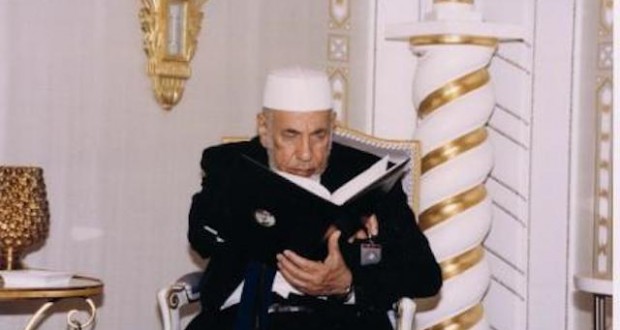 “The superiority of the learned man over the devout is like that of the moon, on the night when it is full, over the rest of the stars. The learned are the heirs of the Prophets, and the Prophets leave neither dinār nor dirham, leaving only knowledge, and he who takes it, takes an abundant portion.”[1]

On Monday the 27th of January 2014, corresponding to the 25th of Rabī’ al Awwal 1435 a great scholar, thinker, prolific writer, teacher and activist passed away; Sheikh ‘Abdul Karīm Zaydān, may Allāh (Subḥanahu wa ta’āla) have mercy upon him, forgive him and raise his ranks in the Hereafter.

Originally from ‘Irāq, Sheikh ‘Abdul Karīm Zaydān was born in Baghdād in 1917. He spent his youth learning and memorising the Qur’ān in ‘Irāq and completed his primary and secondary education in Baghdād and graduated from the school of law in in the same city. He then went on to work as a teacher and principal in a number of schools and institutions. He travelled to Cairo to complete a masters degree in Sharī’ah from the faculty of Islamic law at the University of Cairo. After his masters, he completed his PhD (first class) in 1962 from the same university in Sharī’ah.

By profession, he held the positions of Professor and dean of the faculties of Sharī’ah as well as Religion at the University of Baghdād. Due to pressure from the Bathist regime of ‘Irāq, he chose to migrate to Yemen in the early 90s. Since 1992, he worked as a professor of Sharī’ah and MA/PhD studies at the University of Ṣan’ā’ in Yemen. He also taught Fiqh and Uṣūl at the university of al Īmān in Ṣan’ā’ as well. The Sheikh was also a member of number Fiqh councils such as the World Fiqh Council.

It is important to note here that the Sheikh was not merely an academic but was also very active in Da’wah and showed great concern for the state of affairs of the Muslims. It is evident from his works that he paid great attention to contemporary issues that the Muslims were facing and wrote a number of works providing answers and solutions for the Muslims around the world. He also joined the Brotherhood movement in ‘Irāq and held an important position within the organisation locally.

One of the qualities of Sheikh ‘Abdul Karīm that clearly stood out was his prolific ability to write. He authored a number of books that were taught and studied throughout the Muslim world. It is evident for those that read his works that he excelled in comparative fiqh and uṣūl. The following is a list of some of the books he wrote:

3) Uṣūl ad-Da’wah (Principles of calling to Allāh). This particular book is a very important contribution to this genre of literature.

5) Al Wajīz fī Uṣūl al Fiqh (An important text dealing with comparative uṣūl. This text has been widely taught across the world and is considered by many to be a very important contribution to contemporary writings of uṣūl).

8) Buḥūth Fiqhiyyah Mu’āṣirah (a collection of papers that deal with contemporary rulings such as citizenship in non-Muslim Lands, contemporary financial transactions etc). This particular work seems to be the latest published work of the Sheikh.

The above is only a small selection of some of the books of the noble scholar.

The Sheikh was awarded with the King Faiṣal International Award in 1997 for Islamic Studies for his contribution to Islamic literature and research.

May Allāh (Subḥanahu wa ta’āla) shower him with His grace and mercy and fill his grave with light and peace and enter him into the highest stations of Paradise. Ameen.

[1] Sunan Abī Dawūd.
2014-01-30
Sheikh Alomgir Ali
Previous: Some deaths are more equal than others
Next: [al-Taḥawiyyah Pt 28] The Seal of the Prophets