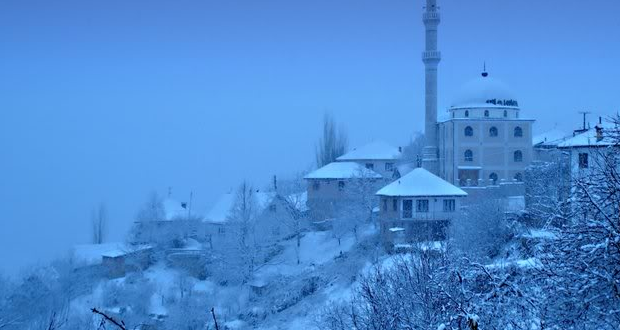 Keeping up with Winter Worship

To download your city’s annual prayer timetable click here and scroll to the bottom of the article.

A moment of reflecting upon the way Allāh has created the world and indeed our lives with so much change and alternation of states reveals to us His great wisdom in creation. He says,

‘In the creation of the heavens and the earth, and the alternation of night and day, there are Signs for people with intelligence.’[1]

Allāh the Most High, out of His divine wisdom, created this life as a constant stream of changing states, altering conditions, and varying environments. One of the wisdoms is that it creates a drive in the heart of a Believer to worship Allāh at certain times over others. If life was merely a monotonous, dim, and unchanging process it would not motivate us to connect with our Creator in worship as this is the nature of people.

Also view: ‘Winter is the Spring of the Believer’ for a video on fasting in winter time

In the northern hemisphere the times of prayer change dramatically during the winter months. The daylight hours in many European countries become increasingly short with prayers times then squeezed closer together. During the shortest days in the UK the Dhuhr, ʿAsr and Maghrib prayers all must be performed within a space of four hours.

The importance of ṣalāh can never be overstated; the Prophet (sall Allāhu ʿalayhi wa sallam) informed us that the criterion between Muslims and non-Muslims is prayer. He also told us that prayer is the pillar of Islām. Indeed his parting advice before he left this worldly abode was to warn us against missing our prayers. Performing prayer at its allocated time is one of the most important pre-requisites of ṣalāh, a fact which is based on the verse,

‘Verily, the prayer is enjoined on the believers at fixed hours.’

The Sharῑ‘a then facilitated the attainment of this condition in times of difficulty. For instance, a concession is granted for the one who cannot find water for purification; they should perform the dry ablution known as al-tayammum.

In cases of extreme hardship the Sharῑ‘ah has allowed Muslims to combine between certain prayers. However, this concession is given in very limited circumstances and for specific pairs of ṣalāh only, such as Dhuhr and ʿAsr, or Maghrib and ʿIshā’. There is a growing trend amongst some Muslims that during the winter months they adopt this concession completely and regularly combine between Dhuhr and ʿAsr. Some may claim that they are basing this on fatwas that allow them do so. However, it should be pointed out that fatwas which seem to go against well-established legislation in the Qur’ān and Sunnah should be received sceptically. Put simply, the individual fatwa cannot override the divine text and established rulings. Let us also remember that we will all stand before Allāh alone, and the first thing we will be asked about is our ṣalāh. If it was offered acceptably then the onward journey into the Hereafter will be made easy, and if it was neglected, our other deeds will be presented as a form of compensation.

“Whoever leaves the ʿAsr prayer, his deeds will be annulled.”

As stated before, there are some prayers that cannot under any circumstance be delayed beyond their appointed times. The best example is that of the ʿAsr prayer whereby the Prophet (sall Allāhu ʿalayhi wa sallam) foresaw this problem arising in his ummah and so warned us against missing ʿAsr. Al Bukhāriī collected various authentic hadīth such as the hadīth of Abi Al Malih under the title ‘Chapter: Whoever leaves Asr…’ whereby he said,

“We were with Buraida, a Companion of the Prophet (sall Allāhu ʿalayhi wa sallam), in battle on a cloudy day and he said, ‘Offer the ʿAsr prayer early as the Prophet said, “Whoever leaves the ʿAsr prayer, his [good] deed[s] will be annulled.”’”[2]

However, we find that many people justify delaying ʿAsr by claiming that they were unable to find either a place to perform ablution or a clean place where they could pray. In response to this it must be said that such claims are at best an exaggerated evaluation of the situation. By exerting effort, a person can find various avenues to perform their ṣalāh. Allāh says,

Another assumption for which there is no basis is that many Muslims think that they can only pray in a mosque or on a prayer mat. In fact, Islām is very particular in allowing prayer anywhere on earth except in a graveyard, a toilet, and before an idol. The Sharῑ‘a also prohibits people from praying in the middle of pathways and avenues as this might cause harm to passers-by or even cause harm for the person performing the ṣalāh.  Besides this, one can pray anywhere, even if they are unsure of its purity from najasah. As a basic principle, if one does not see or smell najasah, they should treat the place as if it is pure. This is because the Prophet (sall Allāhu ʿalayhi wa sallam) rejoiced at the fact that Allāh had made the entire earth pure for prayer and so the default ruling is that all places are pure for prayer unless we find traces of najasah present. Therefore, if you are afraid that the ṣalāh time might expire, you must pray in any place possible.

If the person cannot make ablution out of fear that the time of ṣalāh is about to expire and that the ṣalāh cannot be combined with a ṣalāh after it such as Fajr, ʿAsr and ʿIshā’, then they must use dry ablution (al-tayammum) in order to pray the ṣalāh on time. If the person claims that he cannot do tayammum as he cannot find dry sand, then he can do it on any natural surface.

Fourthly, if the person claims that they find a place where they cannot stand up or move through the motions of prayer properly, then they must pray on time to their utmost ability, even if certain motions are not fulfilled properly. A typical example is praying on a plane or bus where it is not viable that a person stop for performing prayer within its given time.

Women at home should also be extra vigilant in keeping up their prayer timings as they neither hear the call to prayer nor do they go to the mosque, an act that aids in praying on time.

To conclude, these are some temporary solutions and Muslims should make the utmost effort to secure an appropriate place and time for the most important pillar of al-Islām, the ṣalāh. A person should even plan for their ṣalāh once they leave home as this is a plan for their success in both abodes. Allāh says,

‘Successful indeed are the believers. Those who offer their ṣalah (prayers) with all solemnity and full submissiveness.’[4]

To download your city’s annual prayer timetable click here and scroll to the bottom of the article.

Previous: Can Muslims be racist?
Next: “Terror is…” Powerful Spoken Word