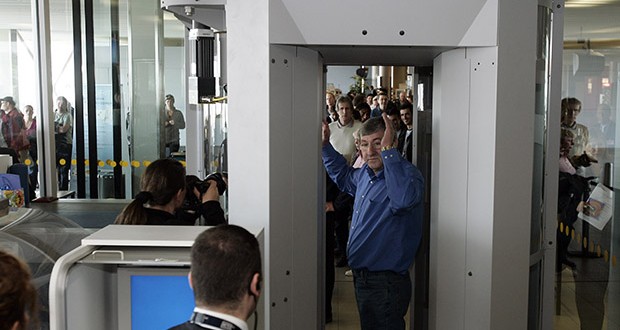 Given the current draconian measure of implementing nude body scanners in the UK, Muslims and others are being forced to shed the notion of decency and be exposed to strangers all in the pretext of maintaining ‘acceptable levels of security’. Indeed, the government has managed to beguile many of the public into believing these scanners are apparently for public safety, a false claim that has been dealt with by many commentators, Muslims and non-Muslims alike.

As we have recently seen, airport staff have been involved in using the scanners for personal gratification, an abhorrent phenomenon that will inevitably continue to happen. These scanners have now set a precedent whereby it is seemingly acceptable to view the genitalia of all, including our children. Ironically, the new Conservative government has now withdrawn ID cards out of concern for civil liberties, yet turns its attention from our personal information to our naked bodies.

Such measures must be seen as unacceptable to all right minded individuals, and thus, they must be withdrawn immediately. It is offensive to all those who stand for decency that the government resort to such lowly tactics to deal with terrorism, so much so that they take on the vile immorality they so quickly claim these terrorists to personify. Indeed, only a little while ago was it that the media condemningly reported that terrorists were using child pornography websites to relay messages to one another, but what for the government who now want to see our children naked?

So what to do?

In the event that the government refuses to withdraw these immoral tactics that will undoubtedly aid in the ‘radicalisation’ of our youth (a term they so fondly use), we find it totally unacceptable that if people who have been selected to be scanned refuse, they will not be allowed to fly. This idea is preposterous, and as stated by others, even the US allows individuals who refuse a scan to be patted down instead.

Thus, it is obligatory upon every Muslim (who is able) to stand against these scanners, and in the event of their continued implementation, to call for the option of a pat-down at the very least. Allah the Most High states,

“And (as for) the believing men and the believing women, they are allies of one another; they enjoin good and forbid evil, they establish prayer and offer charity, they obey Allah and His Messenger. Those are the ones that Allah will show mercy to; surely Allah is Mighty and Wise.”[1]

This call can currently be made by signing the online petition which you can find here (10 Downing Street) whilst also objecting in the form of an email (or letter for those who are unable to access a computer). Email Mike Alcock of the Department for Transport (dft) in order to log your condemnation of the scanners and advocate that in the continued case of violating the basic right of humans not to be exposed to strangers, a pat-down should be offered in place of a body scan. In order to facilitate the email, the letter below may be used as a template, but please take care to personalise your email so that every letter be read as an individual response.
Please note that the period of consultation will end on the 21st June 2010, so it is incumbent that you take action as soon as possible. To be efficient, please send your email (addressed to Mike Alcock) to [email protected]. For those who would rather write a letter, please send your letter to:
Mike Alcock
Department for Transport
Zone 5/12
Southside
Victoria Street
London SW1E 6DT
Please email this fatwa to all the people in your address book as well as printing it off and hanging it on the noticeboard of your local mosque – it is incumbent upon Muslims to encourage one another in this endeavour; such encouragement could be manifested in the form of Friday sermons, public announcements through Muslim media, and even raising the issue at your local mosque or Muslim community centre. Indeed Allah says,

As for the email template, you could possibly write something like this:

I write to you to express my deep condemnation over the nude body airport scanners. I harshly oppose such measures since they violate the fundamental right of dignity and personal privacy. The scanners are a clear violation of morality and decency, and will undoubtedly serve as a cause of offence by the leaking of nude pictures. They infringe upon the personal rights of all, and if anything, do more to endanger public security.

I fully support essential measures which increase passenger safety; however, I refuse to accept that passenger safety may be enhanced only by means of the body scanner, or that passenger security lies in passengers being seen naked. As a people who should take pride in the notion of decency, none should be put in a position where they must choose between security and dignity – indeed, both principles are entwined with one another. We will never be able to ensure security by stripping the dignity of passengers. Given that other technologies and measures exist which are proven to detect the presence of questionable materials and/or weapons, I argue that passenger safety may be enhanced without infringing upon the rights of passengers.

In the case that such vile measures continue to be implemented, I call for the option of a pat-down search for those passengers who refuse to be scanned out of a sense of modesty and dignity. Other airports around the world have implemented such procedures, a fact that clearly indicates their effectiveness.

Thank you for your time.
Yours sincerely,
(Your name)