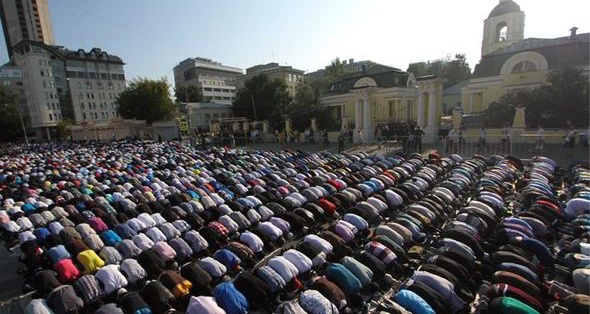 What to do when Eid occurs on a Friday

In the name of Allāh, may he be praised and may His peace and blessings be upon His Messenger Muhammad (sall Allāhu ʿalayhi wa sallam), his family and his companions.

There are always questions whenever Eid occurs on a Friday, and I would like to clarify whether it is obligatory to pray both Eid Salah in the morning and Jumu’ah in the afternoon.

First of all, we should remember that both occasions are among the most important Islamic symbols. Attending both prayers and congregation are very virtuous. The mind-set of the person should be to be eager to attend both prayers as this is part of glorifying the symbols of Allāh. Allāh says,

And whoever honors the symbols of Allah – indeed, it is from the piety of hearts. [1]

That is why most of the scholars including Hanafis and Malikis consider attending both of them as obligatory. The Shafi’i school of thought gave an excuse only for those who live away from the city where the Jummah is established, not to attend the Jumu’ah once they attended the Eid Salah. The reason is due to the difficulty they are likely to encounter to come back to attend the Jumu’ah Salah.

O you who have believed, when [the adhan] is called for the prayer on the day of Jumu’ah [Friday], then proceed to the remembrance of Allāh and leave trade. That is better for you, if you only knew.[2]

The scholars have said that lifting this confirmed obligation needs further evidence of the same level and most of the evidences that are presented are not strong enough to waiver this obligation. Furthemore, al-Nu’man b. Bashir narrated that,

“The Messenger of Allāh (sall Allāhu ʿalayhi wa sallam) used to recite: ‘Glorify the Name of your Lord, the Most High’ and “Has there come to you the narration of The Overwhelming?’, on Friday and on ‘Eid, and when Friday and ‘Eid converged, he would recite them both.”[3]

This incident also happened during the time of Uthman b. Affan as it is reported in the Sahih of al-Bukhari (raḥimahu Allāhu) and the Muwatta’ of Malik (raḥimahu Allāhu) that Abu ‘Ubayd, the freed slave of Ibn Azhar, said:

“I was present on the occasion of two Eids (together) with ‘Uthman b. ‘Affan; that was on a Friday. He offered the (Eid) prayer before the khutbah, then delivered the khutbah and said: ‘O people, on this day two Eids have come to you together, so whoever wants to wait for Jumu‘ah with the people of al-‘Awali, let him do so, and whoever wants to go back, then I gave him permission to do so’.”

However, the official opinion of the Hanbali school of thought is that attending one of the two prayers is sufficient. They support their view by numerous evidences such as:

I. The hadith of Zayd b. Arqam (raḍiy Allāhu ʿanhu), according to which Mu‘awiyah ibn Abi Sufyan (raḥimahu Allāhu) asked him:

“Did you ever witness with the Messenger of Allāh (sall Allāhu ʿalayhi wa sallam) two Eids that happened on the same day? He said: Yes. He said: What did he do? He said: He offered the Eid prayer, then he granted a concession allowing people to miss Jumu‘ah prayer, and he said: “Whoever wishes to pray (Jumu‘ah), let him do so.”

It is narrated by Ahmad, Abu Dawud, an-Nasa’i, Ibn Majah, ad-Daarimi, and by al-Haakim in al-Mustadrak, where he said: “This hadith has sahih isnads, even though they [al-Bukhaari and Muslim] did not narrate it, and it has a corroborating report according to the conditions of Muslim. And adh-Dhahabi agreed with him.” Al-Nawawi said in al-Majmu‘: “Its isnad is jayyid.”

II. The corroborating evidence mentioned above is the ḥadīth of Abu Hurayrah (raḍiy Allāhu ʿanhu), according to which the Messenger of Allāh (sall Allāhu ʿalayhi wa sallam) said:

“Two Eids have come together on this day of yours, so whoever wishes, it [the Eid prayer] will suffice for Jumu‘ah, but we will pray Jumu‘ah.”[4]

Two Eids came together at the time of the Messenger of Allāh (sall Allāhu ʿalayhi wa sallam). He led the people in (the Eid) prayer, then he said: “Whoever wishes to come to Jumu‘ah may come and whoever wishes not to do so may stay away.” [5]

IV. The ḥadīth of Ibn ‘Abbās (raḍiy Allāhu ʿanhu) according to which the Messenger of Allāh (sall Allāhu ʿalayhi wa sallam) said:

“Two Eids have come together on this day of yours, so whoever wishes, it [the Eid prayer] will suffice for Jumu‘ah, but we will pray Jumu‘ah in sha Allah.”[6]

The discussion between the scholars cannot be concluded at this time and hence we advise Muslims the following:

– It is without a shadow of a doubt that attending both prayers is far better than missing one of them.

– Whoever has not attended the Eid prayer for whatever reason while he should have attended it is not included in that concession granted by some scholars. And hence he must attend Jumu‘ah prayer.

– The imam of the Jumu‘ah mosque must hold Jumu‘ah prayers and this is confirmed even by those scholars who do not believe that it is obligatory to attend both.

– Whoever lives at a distance from the masjid and needs to travel a long journey to attend the Eid prayer and it is very difficult for him to stay to attend the Jumu’ah prayer may have the concession allowing him not to attend Jumu‘ah. However he must pray it as Zuhr after the time for Zuhr begins.

– The view that whoever attends the Eid prayer has a concession waiving both Jumu‘ah and Zuhr prayer on that day is an incorrect view. Therefore it is rejected by the scholars and they have deemed it to be mistaken and odd, because it is contrary to the Sunnah and suggests that one of the obligatory duties enjoined by Allāh, may He be glorified and exalted, is to be waived with no evidence to that effect. Perhaps the Sunnahs and reports about this issue – which grant a concession allowing the one who attended the Eid prayer not to attend Jumu‘ah, but state that he must still pray Zuhr – did not reach the one who said that.

[4] Narrated by al-Haakim as stated above; also narrated by Abu Dawud, Ibn Majah, Ibn al-Jarud, al-Bayhaqi and others.

[6] Narrated by Ibn Majah. Al-Buwaysiri said: Its isnad is sahih and its men are thiqat (trustworthy)