The Proactive Character of the Prophet [saw] 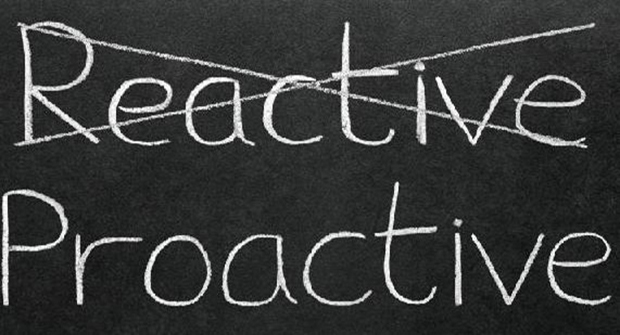 Attaining an understanding of the tools one needs to lead a proactive lifestyle is undoubtedly beneficial to the individual but it is the actual implementation of these tools that will lead to one’s success. Moreover a key starting point is to actually assess oneself and recognise what is within our characters as it is often the case that we forget to reflect upon and evaluate our character in order that we may make the necessary changes.

Take a moment to ask yourself, am I a proactive person? Is it in my character to take the initiative to do something from my own freewill or is it a result of being requested or commanded to do so? Have I been prompted to do something merely because of an external influence? Do I persevere, or do I give up at the first hurdle? Am I a pessimist or an optimist? If we apply these questions to occurrences in our daily lives with our families, friends, and our workplace or even in our efforts to enhance in our deen, this will help us to have a better understanding of our character.

There are certain attributes which are inherent within a proactive individual. One of these is generosity – not just in terms of tangible resources such as money or possessions, but also with their time and emotions. He/she is always giving and willing to offer the abilities and resources that are within his/her capacity. A generous person is always proactive in offering help, e.g. they will give sadaqah to those in need of financial assistance. Monetary sadaqah certainly helps the needy, however, a generous person is not only proactive in offering financial support, but is also forthcoming in offering help to family members, friends, and even complete strangers. Examples such as teaching young children in the family how to recite Surah al-Fatiha, or someone sacrificing their seat on the train for an elderly person illustrate the qualities of a generous person. Sometimes it can be the smallest act of giving requiring the least effort that goes a long way.  As reported by Abu Dharr, the Messenger of Allah (peace be upon him) said,

Leading a proactive life can be attributed to a healthy attitude and good time management skills. A positive and energetic attitude allows one to be motivated to achieve targets and to continuously seek opportunities to improve oneself. Furthermore a well organised individual is more likely to prioritise tasks and manage his/her time effectively. A proactive person is also decisive and takes control of a situation; this can also be associated with being brave. The following hadith provides one with an understanding of the proactive nature of the Prophet (peace be upon him):

It was reported by Anas bin Malik that Allah’s Messenger (peace be upon him) was most sublime among people, in character, and the most generous among them and he was the bravest of men. One night the people of Medina felt disturbed and set forth in the direction of a sound when Allah’s Messenger (peace be upon him) met them on his way back as he had gone towards the sound ahead of them. He was on the horse of Abu Talhah which had no saddle over it, and a sword was slung round his neck, and he was saying “There was nothing to be afraid of…We found it (this horse) running like a torrent of water” (indicating its swift-footedness), whereas the horse had been slow before that time.[2]

Bravery in the Prophet’s (peace be upon him) character enabled him to be proactive in investigating the sound that had disturbed the people of Medina without him being asked to do so and without him waiting for others to act. He mobilised himself quickly to attend to the situation without worrying too much about the outcome. He sacrificed his comfort by travelling without a saddle on the horse of Abu Talha but he thought wisely about looking after his safety by taking his sword. This incident demonstrates the that Prophet (peace be upon him) was proactive in making efforts over that which he had control over rather than concerning himself too much about what he would find at the scene of the sound.

Having a positive attitude and sincere intentions are important qualities for maintaining a proactive lifestyle. One may deduce from the incident mentioned in the above hadith that Allah put ease in the situation for the Prophet (peace be upon him) because his intentions to help the people of Medina were sincere. For example, Allah facilitated for the Prophet (peace be upon him) a swift footed horse that had otherwise been known to be slow.

By studying the Usul Al-Akhlaq An-Nabawiyya, one will understand how our Allah’s Messenger (peace be upon him) had the best of characters. I hope this article has provided food for thought on the qualities one must strive to attain have in order to be proactive and to achieve his/her vision in life, ultimately that which is beneficial for his/her akhira. Though we may face challenges at times and making efforts to achieve targets rarely happen overnight, one must persevere and continuously make steps, no matter how small, to be proactive. Remember, Allah says: “O you who believe! Seek help with patient perseverance and prayer, for Allah is with those who patiently persevere.”[3]

Notes: this article was written in light of the ‘Leading Productive Lives’ Sabeel Seminar September 2012
Sources:www.islam21c.com
Islam21c requests all the readers of this article, and others, to share it on your facebook, twitter, and other platforms to further spread our efforts.
[1] Al-Tirmidhi
[2] Sahih Muslim
[3] Quran 2:153
Meray Derya
Share. Facebook Twitter LinkedIn Email Telegram WhatsApp
Previous ArticleWho will stand with Britain’s Untouchables?
Next Article The Significance of Muslim growth in the UK