How the West was won: An analysis of the Gay Rights Movement Part 1 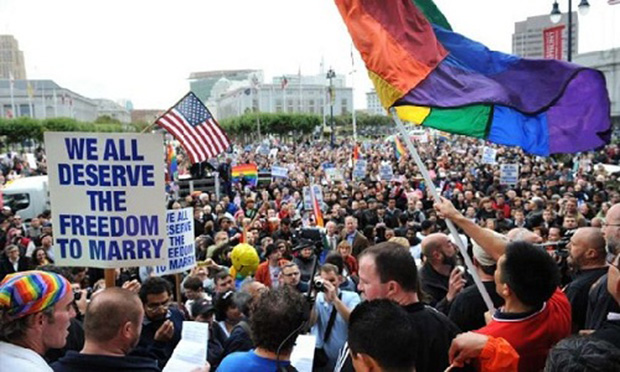 And [mention] Lot, when he said to his people, “Do you commit immorality while you are seeing? Do you indeed approach men with desire instead of women? Rather, you are a people behaving ignorantly. But the answer of his people was not except that they said, Expel the family of Lot from your city. Indeed, they are people who keep themselves pure. So We saved him and his family, except for his wife; We destined her to be of those who remained behind. And We rained upon them a rain [of stones], and evil was the rain of those who were warned.[1]

The LGBT movement catapulted itself out of the movements that defined the 1960s: civil rights and feminism. These movements provided homosexual activists with both the language of their struggle – liberation, militancy, challenging societal norms,as well as the method of organization – rallies, pamphlets, legal battles and publicity gaining activities.

The movement carries with it uniquely modern traits evidenced by the globalization which has aided both regional and international solidarity. The fight for legal rights has led to political courtship and the right to ‘expression’ of sexual orientation as equivalent to more traditional ‘rights’. Today we have  longadvanced fromjustthe increased visibility of gays and their culture, rather homosexual expression has become almost completely integral to modern society, culture, language.

The Age of the Homophile

Until the first half of the last century, homosexuality was closeted. Homosexuals were individuals largely without a collective conscience. To be ‘outed’ meant serious consequences in the workplace, at home and in society. In America, The Sodomy Statutes, which applied to heterosexual sex too, meant that the act was a crime.[2] The American Psychiatric Society classed it as a mental illness. Homosexual bars were routinely raided by police in America, often on the grounds of solicitation, disorderly conduct and loitering.[3]These criminal acts were synonymous in the minds of the state and society with the deviant acts of homosexuality.

Those ‘homophiles’ that chose to speak out, did so in academic and euphemistic language in sympathetic circles, not in the wider discourse of society.[4]The issue was of survival, gaining pity and acceptance and showing to a society, still familiar with religious language, that it was not a sin. There were no demands on the state and many homosexuals did their best to show they were just like everybody else, despite their predilections, and that they were ‘no different from the majority in any socially important respect’.[5]There wereperhaps as many approaches to acting homosexual as there were homosexuals.This has been considered crucial because ‘at this historical juncture, reproducing dichotomous identity categories madesense strategically and profoundly challenged dominant constructions of the ‘‘normal”.

The 1960s and 70s marked a change to this status. Society became increasingly familiar with public protest, whether it was anti- war, civil rights, women’s liberation, or against the state like the 1967socialist and popular riots in France. Popular culture, new forms of contraception and changing attitudes contributed to the liberalization of sexual activity. The Stonewall Inn Bar riots, in Greenwich village, New York, 1969, became the most symbolic of a series of protests against the police and the state by homosexuals who now considered themselves a community. One participant felt it was now their turn as “we had done so much for other movements.”[7] This is debatable and most suitable to the gay narrative to define itself as akin to the African American struggle, for example.

In the case of feminism, there were many shared characteristics. Both were concerned in part with challenging societies concepts of fixed gender roles and family values, and the debate became more politicized as the ideas of radical thinkers like Foucault influenced slogans such as “the personal is political.”[8] There was an overlap of personnel in feminist and lesbian circles with many viewing that “feminism is the theory, lesbianism is the practice.”[9]This was a time of national mobilization, particularly in America. Organisations such as NACHO, ‘The North American Coalition of Homophile Organizations’, brought together local groups,[10]whilst NGTF, ‘The National Gay Task Force’, focused on acquiring legal and political change.[11] Yet this was a time of instability as the movement was finding its feet, particularly on the direction activism should take. NACHO,for example, soon dissolved after its formation in 1966. One central difficulty was whether the focus  should be on ” education” – trying to get a foothold in society by emphasizing their normalness, or should there be a militant/liberationist approach[12], not gaining acceptance into institutions, but tearing down the very principles of heterosexual superiority upon which they are based: the normality of love between man and woman, the sanctity of marriage and family, the assumed unnaturalness of homosexuality.

The development of a gay identity was heightened by the ambiguous relationship with other movements who were not necessarily accepting. In 1963 the gay civil rights activist Bayard Rustin was prevented from speaking at the 1963 Washington Rally because senior figures felt it would be damaging to the civil rights cause.[13] Similarly, the needs of lesbian activists were beginning to outgrow feminist organizations; feminists internationally do not necessarily approve of gay politics. The 1995 UN women’s conference, failed to ratify a motion that a woman had the right to choose her own sexuality, after opposition from conservative African and Asian delegates.[14]

Nevertheless this was a period of heightened activism. The gay movement gained significant victories through lobbying, pressure and organisation. In 1973, homosexuality was removed from the APS list of mental disorders.[15] In 1977, the US courts declared that “homosexuality is not an inherent index of ‘poor moral character’.”[16] In 1978, 95% of federal civil service jobs were equally open to gays.[17] Crucially, and this is a recurring theme in LGBT politics, the movement fought on many fronts to gain their sought after freedoms whilst often being contradictory in their approach. Thus, just as a fixed notion of ‘being gay’ was emphasized as disconnected from the sexual act, there was heavy lobbying to repeal the sodomy laws.[18] The repeal which was ‘legally and symbolically important’[19], nevertheless represents another theme in this analysis: society itself was turning on its moral axis and the gay movement was able to move forward and occupy the space that was left behind by the state as it retreat from traditionally held moral attitudes. The Sodomy laws, for example, were being reformed in most states as part of general penal code reform ‘withoutpressure from lesbians and gays’.[20]

Some were fighting back. In 1977, Anita Bryant dealt a significant blow to the movement’s morale with her “Save our Children” campaign which successfully managed to block Dade County, Florida’s, Lesbian and Gay Rights ordinance.[21] She represented the Religious, Conservative Right of America, which has often been the gay movement’s one consistent enemy. Gay activists continued to make gains however, lobbying hard under the liberal presidency of Jimmy Carter.[22]1979 saw the first ever ‘national gay rights march’ in Washington, followed in 1980 by religious opposition’s the ‘March for Jesus’.[23]

The Aids epidemic, whilst being clear proof of the corruption inherent in homosexuality , also affected the gay movement in significant ways. Firstly, it sped up the legal processes by which gays were gaining more rights. As many gays began dying, their partners began fighting legal battles, often against the families of those with the illness, for rights of access and inheritance.[24]Secondly, AIDS became the Trojan horse by which the movement could further its aims; State authorities were still reluctant to address gays as a community but developing strategies to take this terrifying disease was a different matter.

AIDs medical and awareness programs, though nominally for all affected,were effectively catering to homosexuals. AIDSorganisations were simply extensions of gay and lesbian organisations, often with the same personnel.[25] I would argue a sort of schizophrenia developed in society. On the one hand this disease made people stigmatize homosexuality and revile it, yet on the other hand, by the visible targeting of them as a ” victim community”, state policies and the flurry of AIDS legislation were making them seem an established demographic, perhaps garnering increased sympathy all the while. This is the case today, where AIDS programs receive explicit support from governments even where there is a general hostility to homosexuality.[26]

The gay movement certainly did not see it that way. They felt that the state was not doing enough while they saw their numbers being decimated. ‘To lesbian and gays, the lack of funding for the disease was personal.’[27]So while the political goal was still to make homosexuality seem just as ‘benign as left handedness’[28], there was a revival of activism with direct action groups such as ‘ACT UP’ and ‘Queer Nation’.[29]They gained significant publicity through rallies and demonstrations demanding action from the American government on HIV AIDs and other gay rights by extension. This mobilization was prompted by the ‘crisis’ affecting the ‘gay community’. Yet at the same time most gays would have railed against the notion that AIDS was the ‘gay disease’.[30]This is another recurring theme for a movement based upon followingcorrupted desires; it has always sought to use whatever methods needed to survive politically and conceptually, playing ‘identity politics’[31] at some times whilst emphasizing togetherness with general society at others.

Please join me in the second and final part to this article in the coming days.