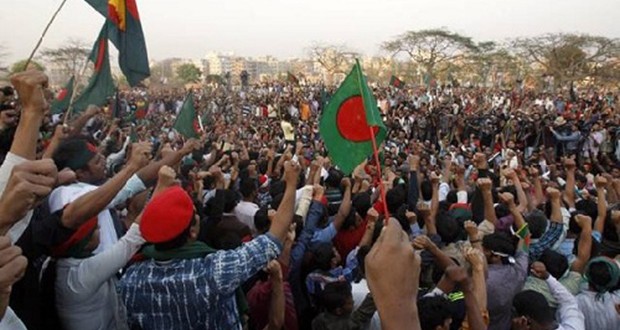 The War Crimes Trials of Bangladesh: Another Perspective

It is a sad reality of our existence that no one nation has a monopoly on oppression and violence. The Asian sub-continent has seen its fair share of such cycles of suffering. From 1947, when hundreds of thousands of Muslims were violently forced from their homes amidst a chaotic partition, echoing to this day in the unspeakable violence directed towards Muslims in Gujarat. Two decades later on September 6th 1965, Pakistani troops and ordinary men banded together to thwart the Indian army’s invasion of Lahore. Unfortunately, those same Pakistani troops went on to take part in the invasion of what was then East Pakistan in March 1971, inflicting war crimes which, according to some independent estimates, resulted in the deaths of between 300,000 and 500,000 Bangladeshi’s, most of them innocent civilians.[1]Nine months later Bangladesh emerged after a violent and traumatic birth that continues to shape its politics and society to this day.

The recent convictions for war crimes of senior Jamaat-e-Islami party members by the ‘International Crimes Tribunal,’ set up three years ago by Sheikh Hasina’s ruling Awami League, is a direct link to that harrowing past. Most notable amongst the convictions is the death sentence in absentia of Maulana Abul Kalam Azad , an internationally recognised scholar who regularly appeared on Bangladeshi television.[2]The charges relate primarily to his role during the war as a senior leader of one of the auxiliary forces linked to Jamaat-e- Islami, the Razakar Bahini which was set up to fight alongside Pakistani troops against those who were perceived to be breaking up the unity of the Islamic nation.[3] These war crime tribunals apparently seem to be engaged in the laudable act of delivering justice to the victims of atrocities committed during the war; yet there are facets of this process, both in its justification and implementation, that are causes for serious concern.

A look into Bangladesh’s fractious history of politics gives us an indication that there is more to these trials than convicting alleged war criminals. Post 1971, Sheikh Mujibur Rahman, the “father of the nation”, set a blueprint for successive governments trying to ‘maintain the basically undemocratic state structure inherited from Pakistan and simultaneously establish a viable popular base.’[4] This relied on both garnering support through ‘patronage politics’- lucratively and questionably rewarding those loyal to the party, such as awards of state contracts, and branding anyone that opposed the party as disloyal to the nation and enemies of the state.[5] Strikingly, the current trials are in keeping with Mujib’s tradition of eliminating rivals by ‘making accusations of collaboration with the Pakistani military government during the nine-month long war in 1971 that need not be substantiated.’[6]

When we take a glance at the other major force in Bangladeshi politics, namely the Bangladeshi National Party (BNP), we get more of a sense of the targeting of Jamaat-e-Islami. The BNP emerged under the military dictatorship that ousted Mujib via assassination and sidelined the Awami league. The party was made up of many disparate elements, from leftists to Islamists, all with one shared characteristic: their sense of victimisation and disenfranchisement under the Awami league – what has been called ‘the politics of grievance.’[7] These two political blocs have buffeted each other and fought over the shifting landscape of Bangladeshi politics like Bangladesh’s rural landowners who hire men to fight pitched battles over chars, fertile and profitable new areas of land that emerge fleetingly as the rains and soils shift every season.[8]Two views of these parties have coalesced in the public view, based in no small part on their actual stances. On the one hand the Awami League, secular, anti-Islamist, pro-Indian; on the other hand the BNP, more willing to accept the Islamic religion as part of the fabric of Bangladeshi life, anti-Indian, espousing a ‘parochial religio-nationalist agenda’.[9]

How Jamaat-e-Islami fits into all this can be gleaned by the recent history of election votes. In no time between 1991 and 2001 did any party win the election – first BNP then AL then BNP – by more than a four percent margin.[10] The JI, since its formal activity in 1979, when the ban on religious parties was lifted by Ziaur Rahman,[11] and especially since 1990, when militarily rule ended, ‘has become the “king-maker” of Bangladeshi politics.’[12] The Jamaat-e-Islaami party has been at the forefront of a gradual move towards public acceptance of Islam in Bangladesh and the vital role it can play in political life. This can be seen by the rise in political participation: in 1970 there were eleven ‘Islamist’ parties, while in 2006 there were ten times the number.[13]They represent a wide spectrum of Islamist thought which may indicate a fragmentation of ideas but nevertheless emphasises growing interest.

This shift has been recognised by the two main parties, who from the very early days when Jamaat-e-Islami opposed the dictatorship of Hussain Ershad, ‘sought out potential electoral alliances with the JI’[14], thus recognising that mainstream political culture was now coloured by Islam. The Awami League, given the principles upon which they founded Bangladesh’s initial constitution – ‘nationalism, democracy, secularism and socialism’ perhaps did so with the reluctance of realpolitik. So now, meaning this political term, with Sheikh Hasina and the Awami League having won a landslide victory in 2008 against the BNP and Jamaat-e-Islami alliance, is the best time of all to strike at the heart of senior figures within Jamat-e-Islami. These war crime tribunals cannot be seen except in the light of these, very political, motivations.

But the Jamaat-e-Islami and the Islamic wave of thought they represent within Bangladesh is much more of an existential threat to the traditional politics of the char: A political landscape where sections of society are forced to coalesce around one or the other, where coming second is no consolation – a ‘naturalized culture of extortion, plunder and intimidation.’[15] The goal of Jamaat-e-Islami is ‘to establish an Islamic social order in society through the state’ and to bring about an ‘Islamic revolution’.[16] The methods taken by the party may not be agreeable to all, nor the answer as to how to bring about Islam in Bangladesh but the desire, the want, is something that has the potential to tower far above the formulas offered to the Bangladeshi people so far. Yes, it can be argued that JI’s presence in Parliament has been minimal and its success at the polls limited, but that is only one side to the impact of their message and that of those like them can have. Now more than ever, we must be wary of this tribunal that so enthusiastically seeks to paint the scholars and leaders of Jamaat-e-Islami in such a malign light.

There is too, a darker force at the helm of the calls for tribunals. Over the years, The Ghatak Dalal Nirmal Committee, “Committee for Resisting the Killers and Collaborators of The Bangladesh Liberation War of 1971”, has been a consistent enemy of the Jamaat-e-Islami and of other Islamic voices. It was founded in 1992 after Ghulam Azam officially became the amir of Jamaat-e-Islami in 1991. Comprising of university professors, journalists, and artists, it sought the trials of alleged war criminals as well as ‘to fight against communal politics in the country’[17] (read Islamic politics). If their call was one of simply bringing war criminals to justice, they could be seen as the neutral voice of reason, but their clamouring has been tainted by their visceral ideological hatred of Jamaat-e-Islami.

This is evidenced by the manner in which they have targeted JI gains in local elections, typically playing on the raw and emotive memories of the war with campaigns urging people not to support the “killers of 1971”.[18]In the words of one local activist: “We told them they can vote for anyone they want –just not the Jamaat or Razakars.”[19]The Nirmal Committee are just one part of a nexus of secularists and self proclaimed anti-Islamists, who aside from associating the JI with crimes that would trigger emotionalism, ‘genocide’ and ‘rape’, they have also played on the fears of rural people who struggle daily to survive by campaigning, for example, that a Jamaat victory would result in NGOs ceasing to operate and ‘the loss of livelihood for millions of rural women.’[20]

Given the political landscape of Bangladesh, is it any wonder that few expect the trials to be conducted in a fair and just manner? In a society where ‘state agencies and functionaries frequently find themselves unable/unwilling to act against dominant political and economic interests’[21], it is no surprise that this process should be mistrusted. This is particularly so given Sheikh Hasina’s announcement that ‘people had already “tried” the war criminals and anti-liberation forces through the ballots, but our government would obviously take legal steps to try them’[22]. An almost textbook example of political pressure on what should be a judicial process free from external influence. Further evidence of questionable judicial standards emerged when one of the judges presiding over another tribunal was forced to resign after records of Skype and email conversations between him and a Belgium-based Bangladeshi lawyer were leaked.[23]

There are yet deeper procedural concerns about the conduct of these trials prompting Human Rights Watch to make key recommendations crucial to the justice and efficacy of these trials, among them: Allowing the accused to question the impartiality of the tribunal, ensuring defence teams have more than the pitiful three weeks to prepare, and amending article 3 of the Tribunals Act ensuring the definition of War Crimes comply with internationally recognised standards.[24] Human Rights Watch’s Asian Director sums up the concerns:

The trials against… the alleged war criminals are deeply problematic, riddled with questions about the independence and impartiality of the judges and the fairness of the process.[25]

So long as these trials continue to be clouded with secularist, anti-Islamic sentiment, and garbed in invocations to the Awami League’s liberation credentials, these trials must be questioned as well as the victimisation of Jamaat-e-Islami members which should not be allowed to go unchecked.

One last thought amidst the rightful calls for justice and retribution for genocide. How much does the government of Bangladesh care for another genocide happening right on their doorstep? The reluctant accommodation of current Rohingyan refugees in Bangladesh is no expiation for the blind-eye being turned to the mass killing, rape and torture meted out to their brothers and sisters across the border. Let us hope this government does not become yet another willing participant in the cycles of oppression and suffering that have blighted the subcontinent for so long.