Are you afraid of getting old? 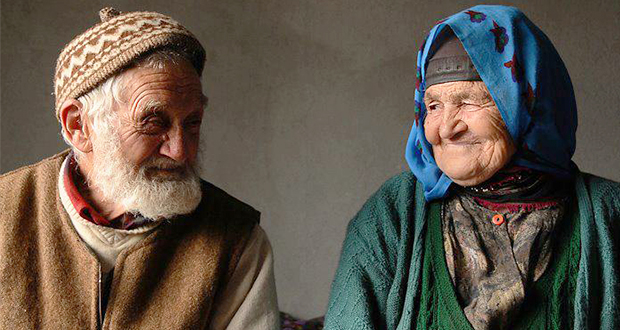 Today’s life in the 21st century has become so frantic that we are trying hard to focus on our survival from day to day. To catch up we take every possible short-cut choice for our lifestyle, whether it is our food, finances, emotions, health, relationships or our overall perception of the world around us.

We are becoming  more superficial than ever and trying hard to perfect our outer persona to the highest of standards at any price, so much so that we want to interfere the natural way our bodies grow and develop. In fact, in developed countries, old age is disapproved of and discriminated against by the society and, therefore people are petrified to grow old or look old. We have become the people of instant entertainment rather than people of reasoning. Women are the worst victims of the left-over baggage mentality, or disposable culture.

How odd and funny is that? Rich and famous people will go to bizarre, grisly and extraordinary lengths to hold onto their fading youth for the sake of the ageist media and to fill the voids of their lives to such an extent that they will do anything to stop this natural process. It is not only limited to celebrities, it has seeped into mainstream society. People are agitated to pass 30 as if they have lost all their value in life. They are perusing every possible age-reversing research, cosmetics and surgeries to sustain the eternal youth.

Why are we so scared of getting old?

The reason is that we do not ask these questions:

Why are we here on Earth?

What is the purpose of our lives?

As a human being we have to go through different stages in our course of life from conception through infancy, childhood, adolescence, adulthood and finally to old age. In fact, all these are from amongst the miraculous signs of Allāh’s Power.

“And of His signs is that He created you from dust; then, suddenly you were human beings dispersing [throughout the earth].”[1]

Without having a logical reason for existence, not knowing your Creator, and possessing no positive end in sight, human beings cling to their youth. Among all the milestones in human life Youth is the peak of strength and desires. Allāh (subḥānahu wa taʿālā) says,

“Allah is the Creator (Al-Khāliq), the Maker of Perfect Harmony (Al-Bārī’), the Shaper of Unique Beauty (Al-Musawwir)…….”[2]

He uses the word “Al-Insān” in the Qur’ān to define us, and has created human beings each the same anatomy and psychology, irrespective of our skin colour,  place of residence or beliefs.

“ O mankind, worship your Lord, who created you and those before you, that you may become righteous .[3]

“ O mankind, fear your Lord, who created you from one soul and created from it its mate and dispersed from both of them many men and women. And fear Allāh, through whom you ask one another, and the wombs. Indeed Allāh is ever, over you, an Observer.”[4]

Where we came from:

“Has there [not] come upon man a period of time when he was not a thing [even] mentioned?”

Verily, We have created man from Nutfah Amshaj, in order to try him, so, We made him hearer and seer. Verily, We guided him to the way, whether he be grateful or ungrateful.[5]

“Does man not remember that We created him before, while he was nothing?”[6]

Our stay in this world:

“And We said: “O Ādam! Dwell you and your wife in the Paradise and eat both of you freely with pleasure and delight, of things therein wherever you will, but come not near this tree or you both will be of the Ẓalimīn (wrongdoers). Then the Shaytān made them slip therefrom (the Paradise), and got them out from that in which they were. We said: “Get you down, all, with enmity between yourselves. On earth will be a dwelling place for you and an enjoyment for a time.”[7]

“[Allāh] said, “Descend, being to one another enemies. And for you on the earth is a place of settlement and enjoyment for a time.”

Where we go after we leave this world:

“And the worldly life is not but amusement and diversion; but the home of the Hereafter is best for those who fear Allāh, so will you not reason?”[9]

There are many āyāt in the Qur’ān recognised in this day and age for the scientific miracles which talk about the different life cycle stages of human being.

“O People, if you should be in doubt about the Resurrection, then [consider that] indeed, We created you from dust, then from a sperm-drop, then from a clinging clot, and then from a lump of flesh, formed and unformed – that We may show you. And We settle in the wombs whom We will for a specified term, then We bring you out as a child, and then [We develop you] that you may reach your [time of] maturity. And among you is he who is taken in [early] death, and among you is he who is returned to the most decrepit [old] age so that he knows, after [once having] knowledge, nothing. And you see the earth barren, but when We send down upon it rain, it quivers and swells and grows [something] of every beautiful kind.”[10]

According to Tafsīr Ibn Kathīr, here Allāh points out how man passes through different stages of creation, one phase after another. He is originally created from dust, then from a Nutfah, then from a clot, then from a lump of flesh. Then he becomes bones, then the bones are clothed with flesh, then the soul is breathed into him. Then he emerges from his mother’s womb, weak and thin and powerless. Then he grows up little by little, until he becomes a child, then he reaches the stage of puberty, then he becomes a young man, which is strength after weakness. Then he starts to get older, reaching middle age, then old age and senility, weakness after strength, so he loses his resolve, power of movement and ability to fight, his hair turns grey and his characteristics, both inward and outward, begin to change. Allāh says: (then after strength gave (you) weakness and grey hair. He creates what He wills.) He does whatsoever He wills and controls His servants in whatever way He wants. And He is the All-Knowing, the All-Power.

The Qur’ān and Sunnah emphasise on treating elders of the community well,

“And your Lord has decreed that you not worship except Him, and to parents, good treatment. Whether one or both of them reach old age [while] with you, say not to them [so much as], “uff,” and do not repel them but speak to them a noble word.”[12]

The Prophet Muḥammad’s (sall Allāhu ʿalayhi wa sallam) noble life  is  full of examples of love towards, respect for and care of the elderly.

In Muslim households all the stages of human life are honoured and looked after according to the Qur’ān and Sunnah. Muslims do not perceive growing old as an ugly spell befalling them, instead they take it as a miraculous sign of their Master and a biological fact.

By believing in the teachings of the Qur’ān, the Sunnah and the  promise of their Master Al-Haqq (The True):

With regard to their ages, they will all enter Paradise at the age of strength and youth, thirty-three years old. It was narrated from Muʿādh b. Jabal that the Prophet (sall Allāhu ʿalayhi wa sallam) said:

“The people of Paradise will enter Paradise hairless, beardless with their eyes anointed with kohl, aged thirty or thirty-three years.”[15]

[13] At-Tirmidhi and Aḥmad; authenticated by Al-Albani