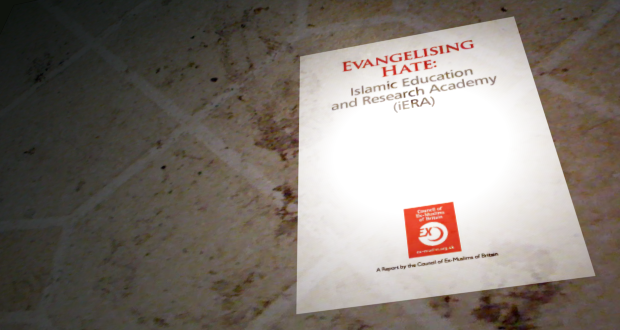 Ex-Muslims’ campaign of hatred against iERA

The Council of Ex-Muslims of Britain (CEMB) published its latest report Evangelising Hate: Islamic Education and Research Academy (iERA). The report’s authors, Al Razi, Maryam Namazie, and Ahmed Idris, believe that iERA, a registered charity in the UK, works for the “International Islamist movement”, and aims to enslave the world to “theocratic norms”. The authors are neither junkies nor fans of Alex Jones. They are intellectuals warning us of danger.

It is hard to take them seriously. The report has a five-page introduction, a one-page conclusion, and thirty-one pages clogged with quotes from YouTube and Twitter. The page numbers in the Content Page are all wrong. The authors examine the views of speakers connected to iERA. Several of the speakers have published books and research. The authors, instead of citing from the published works, present a gallimaufry of quotes mined from the Internet. This is like criticising Foucault, not by dealing with his works, but by googling him.

The authors accuse iERA of advocating the killing of gays. In the iERA Universal Press Pack, the members of the organisation state that they “do not advocate any animosity or violence against anyone regardless of race, colour, creed or sexual orientation and urge all members of society to abide by the law of their land… Our position is clear; we do not call for any discrimination against the LGBT community, and condemn all types of hostility and aggression”.[1]

The authors accuse Yusuf Chambers of the same sin. The Islamic Society (ISoc) invited Chambers to give a lecture at the University of Nottingham. After the lecture, a student asked Chambers about his view on homosexuality. Chambers explained that he didn’t want gays to be guillotined. The student would have none of it! He was so sure that Chambers was a homicidal homophobe that he couldn’t stop ranting. “I personally feel,” said Lucy Wake, Campaigns Officer of the LGBT Network, “as though the Islamic Society have been unduly targeted.”[2]

The authors accuse Hamzah Tzortzis of comparing “homosexuality to cannibalism and necrophilia”. The web link they cite contains a blog post Tzortzis wrote. Necrophilia is not mentioned. Concerning the blog post, Tzortzis said that he, “explained the philosophy behind objective timeless moral values,” and “not once did [I] equivocate homosexuality with any other practice.”[3] In the web link the authors cite, the words ‘homosexuality’ and ‘cannibalism’ don’t occur in the same paragraph together, let alone in the same sentence.[4]

The report’s prose is as fun to read as dancing on holly shrubs.

I can’t think of any organisation that isn’t pro-active. Every organisation attracts people, so, there is no point saying iERA is an “aggregating organisation”. The words ‘missionary’, ‘evangelism’, and ‘preaching’ mean the same thing.

The authors claim that iERA is the “Islamist’s movement’s public relation arm”; yet, they also claim that iERA is “inciting hatred against ex-Muslims, gays, Jews, women, non Muslims, and a majority of Muslims”. PR firms are supposed to make the public adore their clients; iERA is doing this by insulting 97% of the British public.

The authors see cabals in the ordinary.

“Their (iERA)[sic] structure is centred around a core group of preachers and activists who receive income from the organisation. A number of advisors surround them. This structure allows iERA to engage in “plausible deniability”, simultaneously promoting and thereby legitimising hate preachers whilst claiming that they are not part of its core group.”[6]

The Southern Poverty Law Center considers the American Family Association (AFA) to be a hate group. This is interesting because:

“The AFA provide a useful example with which to compare iERA because there are striking similarities between how they defend themselves from the charge of promoting hatred.”[7]

The Islām the West knows is an ignis fatuus. Muslims want to point out that the lights hovering over the graves aren’t ghosts, but methane. Muslim thinkers write books and articles, give lectures and debates, and hold classes and Q&A sessions, so, non-Muslims can see the Islām that Muslims see. This is what iERA does. There is nothing evil in discussing folklore and fact, but the authors can find pentagrams in every basement.

“iERA use multiculturalism (as a social policy that segregates “communities”) and cultural relativism as well as the rights [sic] language of diversity, tolerance and inter-faith dialogue to increase influence and access.”[8]

iERA is guilty of engaging in intellectual dialogue. It won’t appeal to the Supreme Court. Is it wrong for organisations to seek publicity? No. So why is iERA rebuked for wanting an increase in “influence and access”? Because, we are told, iERA has “theocratic aims” similar to that of Robert Catesby.

Muslim radicalism is real. The Woolwich Attack will always haunt the British public. This carcinogen of the mind and soul—I’m talking about Muslim radicalism—should be opposed, not by paranoia, but by wisdom. Many Muslim thinkers and organisations routinely condemn Muslim radicalism. iERA is one of those organisations. iERA’s message is simple: people can be both good Muslims and good citizens. They can believe in the Quran and abide by the law. The authors wish that iERA “be classified as a hate group” and  “have their [sic] charitable status withdrawn”. This, for them, is “a starting point for a wider investigation of the influence of Islamism in modern Britain.”[9]

British Muslims feel they are treated like foxes and hunted by hounds in the field of public opinion. The huntsmen, enjoying themselves, must remember that their sport has consequences. Many British Muslims, seeing that they are not welcome in the field of public opinion, will flee to the den of radicalism. I don’t expect Al Razi, Maryam Namazie, and Ahmed Idris to understand this. Their creed doesn’t allow tolerance to Muslims. The first paragraph of the CEMB manifesto says:

“We, non-believers, atheists, and ex-Muslims, are establishing or joining the Council of Ex-Muslims of Britain to insist that no one be pigeonholed as Muslims with culturally relative rights nor deemed to be represented by regressive Islamic organisations and ‘Muslim community leaders’.”[10]

The authors want Britain purged of Muslims who don’t hold ex-Muslim values. They want the leaders of the British Muslim community to vanish. They want Muslim organisations in Britain to be dismantled. The CEMB could be the best advertising agency the Muslim radicals will ever have.

2014-05-27
+Editor
Previous: The Return of Gaddafi
Next: Telegraph caught colluding with anti-Islam fanatics