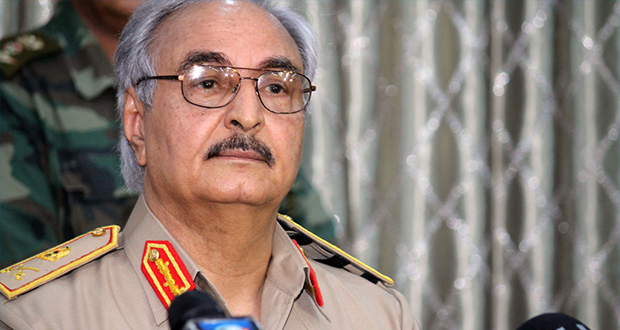 Tampering with the Arab revolutions has become a fashionable pastime amongst military generals. Field Marshal Abdel Fattah el-Sisi overthrew the first popularly elected president in the history of Egypt, exterminated those who opposed him and paved the way for his absolute rule.  Ironically, Sisi claims that his actions against the Egyptian people were all done in response to the demands of the Egyptian people.[1]

In Libya renegade General Khalifa Belqasim Haftar has taken a page out of Sisi’s book, launching a military campaign in an attempt to grab power, all of course in humble service to the Libyan people, or so he claims.[2]

Haftar is regarded as a notorious turncoat, infamous for several attempts at toppling the ruling parties in Libya. He fought alongside Gaddafi in 1969 to overthrow King Idris. Under the rule of Gaddafi, Haftar led the Libyan ground forces in Chad where he was accused of war-crimes including the burning of villages.[3] He then turned against Gaddafi contesting his rule, apparently in close coordination with CIA.[4]

After a 20 year stay in USA, Haftar returned to Libya to join the fight against Gaddafi’s forces. Due to his military experience he quickly became one of the main commanders of the revolutionary army, however his companions were openly suspicious of his motives and his dubious US connections. When Gaddafi was finally overthrown, Haftar seemed to lay dormant for a while before attempting to secure power over Libya once again.

Since the revolution Libya has been consistently unstable. Recently the country has been characterised by armed clashes, political disputes and continuous raids against the Parliament – the single legitimately elected authority in the country. The Parliament has become a popular hotspot for armed gunmen; they storm the scene as and when they please, fire live rounds, make demands and threats before finally retreating without a trace.[5]

Very little genuine investigation into the true origins and motives of these armed assailants is ever conducted. For this reason the blame for the chaos and banditry has often been placed squarely on the shoulders of the revolutionaries as well as the convenient scapegoats of “Islamism” and “Islamic extremism”. Military commander Ziad Balam, who is familiar with the groups on the ground due to coordinating the efforts of the rebels during the revolution, has said that the perpetrators of these crimes are often deep state operatives loyal to the previous regime.

While there are indeed numerous social and political factors behind this instability, the role played by those with clandestine motives is often overlooked. There is little room for doubt that concealed agendas intentionally perpetuate the chaos in Libya. After his capture, Saadi Al-Gaddafi (son of Muammar Gaddafi) admitted that it was in fact he who was responsible for much of the unrest within Libya by commanding agents loyal to his father’s government from abroad, supplying them with funds and weapons. He also revealed that he was behind the rouge exports of petroleum which caused a crisis within the Libyan government and Parliament. Until his admission of guilt, ‘Islamism’ and ‘extremism’ were to blame by default.

Amidst this convenient chaos General Haftar sprang back into action, ruthlessly seeking to seize power by force once again, this time from the revolutionary Parliament he once claimed to support. Haftar attempted to recreate Sisi’s media propaganda success though a public statement, broadcast on various satellite channels. In this statement he announced the dissolution of Parliament and the establishment of a political road map for the country to follow.

When the retired Major General attempted to recreate Sisi’s media success he failed miserably due to his rap sheet of treachery. Instead of obedience, Haftar’s attempt to usurp power was met with raised eyebrows and demands for his arrest. Following his embarrassing media failure, Haftar realised that approach of public support would not work out for him, and instead resorted to using violence to impose his will. Haftar launched a military campaign against the Army forces in Benghazi under the good old banner of “combating extremism and terrorism.”[6] His attack resulted in roughly 100 casualties in Benghazi before peacekeeping arrived to calm the situation.

Haftar has been justifying his actions as a ‘fulfilment of the wishes of the people’ just as Sisi did in Egypt. In fact much of his actions, motives and rhetoric are heavily reminiscent of Sisi’s coup against Morsi. There definitely seems to be a deeper link between the two power-hungry generals. In spite of his brutality against his own people, and clear intentions to rule Egypt as a dictator, Sisi enjoys lavish support from certain Arab and international governments, due to his opposition towards the ‘threat of Islamism’ that would invariably harm the dictatorships. The timing and rhetoric behind Haftar’s most recent scramble for power causes some to speculate that his actions are motivated by the same regional and international backers supporting the new Egyptian dictatorship, rather than any concern for Libya’s security.[7]

Another parallel between the two military men is the fact that, contrary to their claims, they actually have very little public support. Sisi has a fanatical following in Egypt’s pro-coup TV channels and in some parts of urban Egypt. Their numbers are, however, hugely inflated in the media. In the case of Haftar, there have been no public shows of support or staged rallies of ‘millions’ of Libyans massed in fields calling for his rule over Libya. Haftar has absolutely no legitimate mandate as a political actor, yet paradoxically he represents his unlawful actions as the ‘legitimate fulfilment of the wishes of the Libyan people.’

For decades the Middle East has been exploited by those who seek to control the wealth of resources it holds, with no concern for the will of its people. The Western world has perused its interests in the region both openly and covertly, while endlessly maintaining that it calls for individual freedoms, democratic values and respect for public will. The reality is that the West would much prefer dealing with tyrannical military dictatorships (as shown by their historical support for Haftar), rather than dealing with governments which are elected to represent the will of their people. Not least the elected “Islamist” governments that have been so ruthlessly overthrown while the international community turns a blind eye.

It seems that in every case, the genuine will of the majority Arab people in the wave of revolutions across the Middle East, has been the establishment of Islamic governments through democratic means. This is the very ‘threat’ which these self-proclaimed representatives of the people are so relentlessly attempting to stamp out. Meanwhile wealthy Arab states watch on, fearing that the tide of Islamist revolutions may eventually reach their shores and threaten the status quo. It is very possible that such states actively fund these military generals who act in spite of the desires of Arab people and the original motivations behind the revolutions, serving their own ambitions.

A self-determined Middle East threatens to break a century old cycle of exploitation. Families who have been in power for decades are threatened by the prospect of true change and as such there have been attempts to quell the will of the Arab people by providing a new Hosni Mubarak for Egypt and now a new Gaddafi for Libya. As the Sisi model of throwing democracy and establishing dictatorship has proven to be successful, it seems it is being tested once more in Libya, and perhaps it will soon be distributed further afield.

Conflict between truth and falsehood is the norm of this life. However, Muslims need to follow Allāh’s Guidance and He will grant them victory sooner or later.

In the Qur’ān we read:

“Mūsā (Prophet Moses) said to his people [when they were expelled from Egypt]: “Seek help in Allāh and be patient. Verily, the earth is Allāh’s. He gives it as a heritage to whom He will of His slaves, and the (blessed) end is for the Muttaqūn (pious).”[8]

In fact, Allāh is preparing the Ummah through these tests and calamities for a bigger victory. Such trials expose the reality of insincere people and filter Muslims in order to give victory for those who deserve it.

“[This is] so that Allāh may distinguish the wicked from the good and place the some of wicked upon others and heap them all together and put them into Hell. It is those who are the losers.”[9]