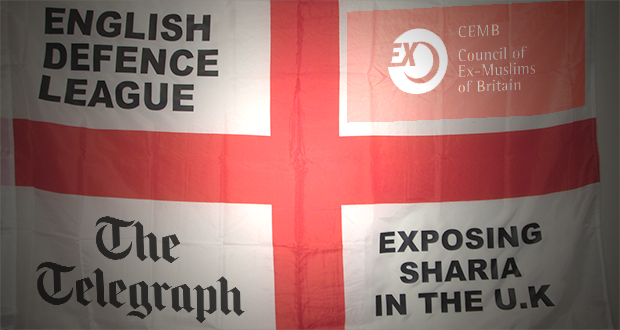 “HATE-EVANGELISING” TELEGRAPH USES EXTREMIST MATERIAL IN ITS REPORT ON IERA

The latest attack [1] on an Islamic organisation in the Telegraph is a demonstration of the seething hatred that characterises the neocon media, coupled with the assistance of compromised government organs [2], towards those who propound Islam. This is an exposition of an example of where impartiality has been forfeited in order to support and propagate the neocon narrative against Islam and Muslims.

Referencing a network of anti-Muslim extremists, the Telegraph (or rather, the Torygraph) has done a spread [3] on iERA, wrapping highly specious anti-Muslim rhetoric as a “report”, and in the process, smearing a Muslim organisation. It is necessary to note that iERA has been subject to an investigation into their governance, not extremist views.

Using this as a premise however, the smear has been mainly constructed around a “report” (if we can even call it that) written by anti-Muslim extremists and a few other sprinklings of highly discredited events which provide the armoury against iERA and Islam.

The Council of Ex-Muslims of Britain (CEMB) was launched in 2007. It is a front organisation [4] for the anti-Islam, far-left Worker Communist Party of Iran and consists mainly of the party’s members. CEMB’s primary public advocate is Maryam Namazie, who is also the editor of the report which the Torygraph has cited, Evangelising Hate. Ignoring the self-evident hypocrisy of using an “ex-Muslim’s” report, her vitriolic hate for all religions and in particular Islam makes her one dubious character to reference in an article about Islam and Muslims. Nevertheless, I will let her own hate-speech exemplify my point.

She believes [5] that “religion should come with a health warning like cigarettes: ‘religion kills’,” however, Islam is singled out as being even more perverse. According to her, Islam and the Shari’ah are an, “insult to humanity” and Islam needs to be “forced into running soup kitchens”. She states [6] that,

“there is a distinction to be made between religions in general and Islam in particular, but for no other reasons than that it is the ideology behind a far-Right regressive political movement…”

Regarding the veil, she states,

“Moreover, when it comes to the veil, much more needs to be done than banning the burqa and neqab and the veil from public spaces. The veil is a symbol like no other of what it means to be a woman under Islam – hidden from view, bound, and gagged.”

She has supported [7] the highly “illiberal” ban on the hijab and purports to justify it with a twisted logic of choice.

Believing that “rescuing Islam” is futile she further states:

“We need… real solidarity with and a strengthening of the anti-Islamic enlightenment bubbling from below that despises Islamism and Islamic morality, scorns the clergy, and rejects an ordained social hierarchy, not more of the same attempts at rescuing Islam and Islamism over the dead bodies of our beloved.”

Not one for impartiality then. In line with that, she is lauded [8] by the far-right, terrorist-inspiring [9] Robert Spencer crowd!

Her “report” reinforces the insidious neocon narrative on Islam and Muslims. And it seems that the neocons are indeed using her to further their vision of Islam and Muslims. The Department for Education [10] consulted [11] Namazie regarding the fabricated “Trojan Horse” plot and “Islamism”. And now the neocon-peddling Torygraph has put together a hatchet-job which makes the Iraq dossier look like a peer-reviewed journal, using the hate-filled Namazie. Ironically, Namazie once spoke out [12] against Ayan Hirsi-Ali for “mixing with the neo-cons”. It seems Namazie herself being abused by the neocons no longer bothers her.

The repugnant reliance on the extremist variety does not end there for the Torygraph. The report makes several references to a website which is run by [13] Harry Matz who is a member [14] of the violent extremist group EDL and the Jewish Defence League.

The main target of the smear is Abdur Raheem Green, accusing him of anti-Semitism and homophobia. What the report fails to mention is that firstly, Green has issued a clarification of the statements made and selectively referenced in the “report” and has apologised to all those who may have been offended by his past speeches. Secondly, the comments were mentioned a long time ago, a period over which the views and articulation of those views change. The accusations thus demonstrate a seething hatred and obsession to demonise Muslims at the expense of genuine impartiality.

Before the neocons reject this notion (because Green is Muslim, presumably), they would do well to examine Roger Scruton, the ideological inspiration of Charles Moore, the former editor of the Telegraph, and Douglas Murray who frequently cites Scruton in his anti-Muslim book Neoconservatism: Why We Need It. In his essay, “Sexual morality and the liberal consensus” (1989), Scruton called homosexuality a “perversion” and argued homophobia could be justified before modifying his view [15] in 2010.

In the article’s further efforts to demonise iERA, it attacks two advisors, the first being Dr Bilal Philips. His spurious ban was due to a clip taken from a recording made in 1996, in which he spoke of suicide bombing being used as a military tactic. The Home Office incorrectly attributed the statement to him being made in 2009. A more detailed response by Philips is available here [17], however it is sufficient to note that his position changed once the targets of suicide bombing were civilians:

“…in my hundreds of lectures (on YouTube and elsewhere) I have clearly condemned suicide bombing as haraam (forbidden) in Islam [outside of military necessity] especially where directed at civilian populations. In fact I was among the first to condemn 9/11 and 7/7 when they occurred.”

As for the second, Dr Zakir Naik, it gets interesting because Naik was the preferred choice to “prevent extremism” of the then counter-terrorism head, Charles Farr, who supported Naik’s entry and believed he could be used to counter extremism. The Conservatives (obviously) supported May’s decision, however Farr clearly stated [18] that May’s “decision was wrong”.

The Torygraph, in an effort to expose the “hate” of an organisation dedicated to spreading the message of Islam, has in fact demonstrated its own bigoted hatred of Islam. It has sought to reference anti-Muslim extremists: Maryam Namazie, who has been praised by terrorist-inspiring [19] Robert Spencer; and a Spencer-ideology-sharing EDL member, in what can only be ironically described as “evangelising hate”.  In other words, this is anti-Muslim propaganda.  The question is, what will the government do to deal with this?

The Muslim minority is being subjected to anti-Muslim targeting and yet the UK Government is continually failing in its observation of international law, which it so proudly propagates to countries around the world. It is resulting in attacks on Muslims and I myself have personally experienced such attacks in public as a result of my religious appearance. Article 20(2) of the International Covenant on Civil and Political Rights states,

Any advocacy of national, racial or religious hatred that constitutes incitement to discrimination, hostility or violence shall be prohibited by law.

The UN Human Rights Council Resolution 16/18, which the UK is committed to according to the latest Human Rights report published by the FCO,

Condemns any advocacy of religious hatred that constitutes incitement to discrimination, hostility or violence, whether it involves the use of print, audio-visual or electronic media or any other means.

Redacted from an article originally posted here on CoolnessofHind.