Hijab: A Generation of Change 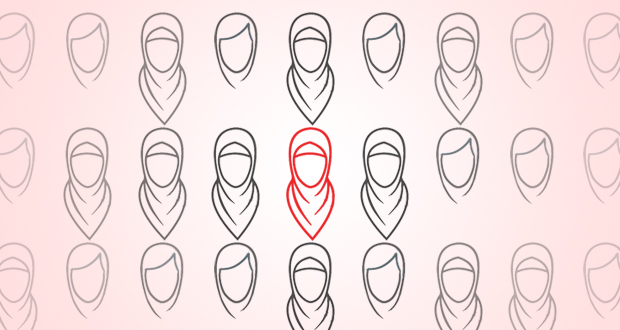 It started one Ramadan. But then, I am getting ahead of myself. Perhaps my head is a good place to start; it became the central focus of my attention when I was in Year 11.

I spent two years in Pakistan, and there, cultural identity had not been an issue at school. We accepted each other as we were and I had made some really strong bonds there. Coming back to the UK, I had very few options to choose from in terms of the schools that would give me entry at such a late stage. I ended up being accepted by a school in a predominantly white area.

During the first few weeks, I was taken aback by the fact that I did not fit in. Suddenly, I was very aware that I was, well, brown. Nobody in my family wore hijab, but that was not the issue here. The issue was that the girls were heavily made up, their hair was unnaturally straight, or in curls, and they had significant amounts of eye liner, eye shadow and mascara on that would put a platoon of Navy SEALS to shame. I had never really taken care of appearance but, at this point, I felt out of place.

I therefore started to take steps in order to fit in with the new crowd. I began to straighten my hair, a lot. I started experimenting with make-up and eventually excelled at it. Gradually I started to mirror the girls surrounding me. The clothes, the hair, the make-up, the whole nine yards. Despite all these changes, though, despite the huge amount of effort I had gone to in order to fit in, much to my surprise, I found I was still rejected and excluded.

I won’t lie: it hurt. A lot. I felt heartbroken, betrayed even, and when you are aged 15 and 16, those feelings are amplified a hundred-fold. I felt like I had no identity and, in a way, like I had no soul. I felt like I did not exist and that is a terrible way to feel, especially at that age.

They say Allah guides those whom He loves, and this hidayah (guidance) came in the holiest month of the year. Not long after the above incident, it was the blessed month of Ramadan. I cannot tell you what it was, but I felt something different. There was a spark in the innermost core of my being. Maybe it was my soul reaching out, tugging at my heart. Whatever it was, it guided me to a book which I now hold very dear. It is simply entitled ‘The Islam Guide’ and it taught me everything that I needed to know about Islam. Islamic history, the Islamic civilizations, Islamic finance, the Day of Judgment, all of it. As Arabic was not my first language, I did not understand the Quran that I had read. This book took verses from the Quran and contextualised them in a way that I could understand, digest, and implement.

The change first happened inside. I know it sounds clichéd, but it is true. I was suddenly very conscious of Allah (subḥānahu wa taʿālā) and of my responsibility as a Muslimah.

Following this change in my heart, I sat down with my mother. She knew something was up, but waited for me to speak. I told her that I wanted to wear the hijab. Now, I had played out this scenario a hundred times in my head before I actually sat down with her in person. A hundred times in my head she had reacted differently. However, none matched her actual reaction which was simply to ask me, ‘Are you sure?’ I was quite taken aback, but she explained to me that it was a serious step and that I would be quite disappointed in myself if I threw in the towel after a while. I told her that I had thought about it seriously and it was what I wanted to do. She gave me her blessing and I was content with my decision.

Now, the next step is to actually wear a hijab. When I say ‘wear’ I mean go out in public with it, not wearing it in your bedroom with a hundred pins in it while standing still. The day I chose to wear it was on the day I received my GCSE results. I still remember it. It was a white hijab and it took me so long to put on. A fold here, a pin there, a crease here, a tuck there. Eventually, it felt secure enough and I went to school. They all started. ‘Who’, you say? Everyone, and I mean everyone. They were in complete shock. Do you know what it feels like to have about 150 pairs of eyes on you? I do, but it only lasted about 10 minutes. Then they got over it and I think they even respected me a little more for it. I had their approval because I had formed my own identity. The funny thing is I did not really care if I had their approval or not, not at this stage. What was most important that day, and that stage of my life, is that I approved and I had found and accepted myself. The sense of acceptance I felt that day was from Allah. He, I had hoped, was pleased with me and that is all that mattered in that moment in time. My word that day, for the results I got and the way I felt was: ‘Alhamdulillah.’

I think my family thought the hijab stage would pass. That it was a prolonged period of euphoria because I had passed my GCSE exams. Of course it was not and, after a while, my family and extended family started to take notice. I would be commended for it, relatives would ask me about it and, in some way, it became a talking point. After a while, even my family accepted that this was who I was.

Then something miraculous happened. My mother started to wear the hijab. She had never worn it before. Then followed my sister and even one of my cousins. She would always ask me about it. When she started to wear it I asked what had brought about the change. She said that she had been reflecting on what I had said for a long time. Now, it has been several years since and more and more of my relatives are, Alhamdulillah, turning to the hijab as a dress code and way of life.

Someone recently told me that I ‘inspired a generation’, but I am not so sure. All I did was make the choice myself, for myself. If some of my relatives followed suit then Alhamdulillah. I hope Allah is pleased with me as a result.