Be Inspired by this Jerusalem Prophecy 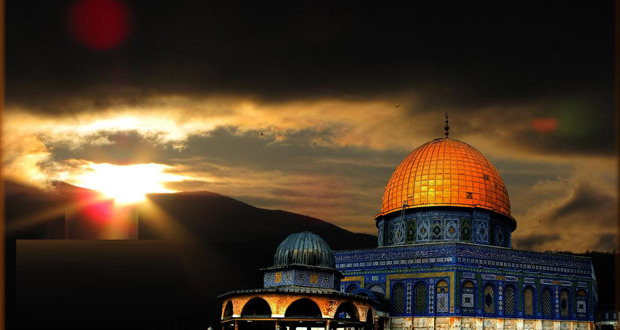 The Messenger of Allāh (sall Allāhu ʿalayhi wa sallam) informed us of events which will befall this Ummah (i.e. the Muslim community). Some of these narrations speak of the evil that will occur, that which would distance us from Allāh – the Most High – and make us weak in front of the nations. We are, today, actual witnesses to many of these events. In such periods it is sometimes easy to forget and overlook the good that is also due to transpire of a future, power and honour for the Muslims who will be well-established in the land.

When we look to the example and life of the Messenger of Allāh (sall Allāhu ʿalayhi wa sallam) we see that he was a hopeful and optimistic person. Much like the onset of his messengership which came to the darkest place on earth during the darkest age of human history, so too do we find that, during his life, when all seemed at a loss; when the citadel of darkness had been stormed by the forces of evil and treachery, the Messenger of Allāh (sallAllāhu ‘alayhi wasallam) would inspire the believers with hope. In the hurricane of fear, he stood firm like a mountain, unrelenting in his mission.  The Messenger of Allāh (sall Allāhu ʿalayhi wa sallam) was always optimistic.

Prophecies in times of hardship

Some years after the migration, the Battle of Khandaq (Trenches) took place. It was also known as Ahzab (Confederates) because, along with the Quraishi polytheists, local Jewish and Arab tribes and groups came together in order to attack the Muslims in Madīnah.

Muslims dug trenches to keep out the enemy and, in the midst of all this, some were terrorised by fear at the fact that the whole of Arabia had gathered against them. The Messenger of Allāh (sall Allāhu ʿalayhi wa sallam) remained optimistic and reiterated the promises of Allāh when he struck a rock three times, and each time he struck a bright light would spark. In another narration it is said it was like a light in the middle of a dark night; this is evidence that the three sparks came up with each strike. The Messenger of Allāh (sall Allāhu ʿalayhi wa sallam) he said:

Recent events and the Prophecy of Jerusalem

The recent announcement concerning the status of Jerusalem and its being designated by Donald Trump and the American administration as the capital of the illegal and occupying state of Israel is, in the words of the Malaysian Defence Minister, Hishammuddin Hussein “a slap in the face of the Muslim world”. It brings to light just how weak the Ummah’s position is. In this situation, it is very easy to become despondent. However, we learn from the above examples that the Messenger of Allāh (sall Allāhu ʿalayhi wa sallam) would use such times to inspire hope and it is therefore an opportune time for us to recall the prophecies regarding Jerusalem.

“Ibn Hawwala if you see that the Caliphate has taken abode in the Sacred Land (Jerusalem) then the earthquakes and tribulations and great events are at hand. The last Hour on that day will be closer to people than my hand is to your head.”[6]

Yunus b. Maysarah (raḍiy Allāhu ʿanhu) also relates that the Prophet (sall Allāhu ʿalayhi wa sallam) said, “This matter (the Caliphate) will be after me in Madīnah, then Al-Shām, then Jazira, then Irāq, then in the City, then in Al-Quds (Jerusalem). If it is in Al-Quds, its home country is there, and if any people expel it, it will not return there ever.”[7]

ʿAbd Al-Raḥmān b. Abī Umayrah (raḍiy Allāhu ʿanhu) relates that the Prophet (sallAllāhu ‘alayhi wasallam) said, “There will be an oath of allegiance according to guidance in Al-Quds (Jerusalem).”[8]

These truly are amazing aḥadīth. What we can glean from them is that not only will Jerusalem be liberated, but that the seat of the Khalīf will also become established in the land. The precise order of places mentioned in one of the above ḥadīths is truly fascinating. We know that the Khilāfah started in Madīnah, and then during the rule of the Ummayads, transferred to Shām/Syria. The next place mentioned, Jazira (Upper Mesopotamia), is a place which, in the early periods of Islām, covered the areas between what we today refer to as Iraq, Syria and Turkey including cities such as Mosul and Raqqa, which were the primary centres for the Ummayad Khilāfah of old, and Harran. During the reign of the Umayyad Khalīf, Hishām b. ʿAbd al-Malik (724-743) made the city of Resafa, which comes with the district of Raqqa, his home residence where he built several palaces. Then during the reign of Marwan II, the city of Harran became the seat of the Khilāfah stretching from Spain to Central Asia (744-750) until it was conquered and looted by the Abbasids in 750. Both Raqqah and Harran came within the area that was known as Jazira and it is apparent therefore that Jazira was the temporary seat of the Ummayads during their end period. The next location mentioned – Iraq – was fulfilled by the Abbasids who made Baghdad their imperial capital. As regards the next location, many scholars have stated that the reference to “the City” was regarding as Heraclius’s city of Constantinople (Istanbul) which, of course, became the capital of the Uthmāni Khilfah. This then leaves one more city – Al-Quds, Jerusalem.

At no point in the glorious history of Islām, has the Khilfāh been in Jerusalem. Salāhuddīn who conquered Jerusalem from the barbaric Crusaders was the not Khalīf of the Muslims – he was honoured with the title of Sultan who himself gave allegiance to the Abbasids. In any event, his base (of the Ayyubids) was Damascus and not Jerusalem.

Looking through the history of Islām, we learn that neither godly leader, nor brave liberator emerges, except that there are pious individuals and scholars around to teach and guide them and to face their struggles.

We find this aspect of leadership woven through all great characters in the history of Islām.

Take as an example Salāhuddīn; he was nurtured by the scholar and ruler Nūruddīn Zenghi who laid the foundations for the liberation of Al-Aqsa and who inspired Salāhuddīn. Just as the Messenger of Allāh (sall Allāhu ʿalayhi wa sallam) set the Miqāt for a future purpose, Nūruddīn built an exquisite and elaborate mimbar in Aleppo in or around 1154. This mimbar was to be placed in Masjid al-Aqsa. Built over thirty years before the liberation of al-Quds at the hands of Salāhuddīn in 1187 – once the liberation was completed, the minbar was placed inside the masjid.

Later in life and after the death of Nūruddīn, Salāhuddīn was motivated by the scholar, Behr-addīn b. Sheddād, to complete the liberation and was accompanied by him in the battles along the way.

Another example is Muḥammad Al-Fātiḥ. This was a man who, from the age of 12, made the word of Allāh (subḥānahu wa taʿālā) ingrained and inculcated in his heart and, in particular, the ḥadīth of conquering Constantinople was instilled in his very being by Sheikh Shamsuddīn such that it changed his life forever. He conquered Constantinople and, with it, effectively commenced the glorious reign of the Ottoman Caliphate. Sheikh Shamsuddīn like those before him accompanied Muḥammad al-Fātih in the battles along the way.

During the time of the crusades Ibn Asākir authored his magnum opus, Tārīkh madīnat Dimashq, ‘History of the City of Damascus’, which was the largest biographical dictionary ever produced in the medieval period. With 74 volumes, plus indices of an additional 6 volumes, it is one of the treasures of Islamic historiography. It celebrated the holiness of Syria by documenting the lives and achievements of notable men and women who lived in this region. The principle purpose of Ibn Asākir compiling this work and emphasising the sacredness of the land was to inspire Muslims to protect it from the Crusaders.

We need scholars today to similarly educate the masses on the virtues of this sacred land,  inculcate the love for it and to remind them of the prophecy to be fulfilled. We need to inspire the ummah to greatness once again and, perhaps then, Allāh will send amongst us great men such as those mentioned above.

Finally, it is clear that Trump’s move has only been made possible by the treachery shown by the leaders of some Muslim-majority states who have spent the last few years encircling Palestinian resistance movements like vicious sharks suffocating and all but bringing them to their knees. It was a calculated announcement made at a time wherein they would incur limited risks. However, Allāh through His Messenger (sall Allāhu ʿalayhi wa sallam) has already made clear that this assumption is nothing but a manifest miscalculation as the resistance will never end:

“A group of my Ummah will not cease to fight at the gates of Damascus and at the gates of Al-Quds (Jerusalem) and its surroundings. The betrayal or desertion of whoever deserts them will not harm them in the least. They will remain victorious, standing for the truth, until the Final Hour rises.”[9]

[2] Life of the Messenger of Allāh, Dr Sallabi

[4] The state a person enters into to perform the pilgrimage

[7] Ibn Asākir (this ḥadīth has been graced as weak by some, however the content is strengthened by the other ḥadīth related to this issue)