Justice: The Epitome of Islam 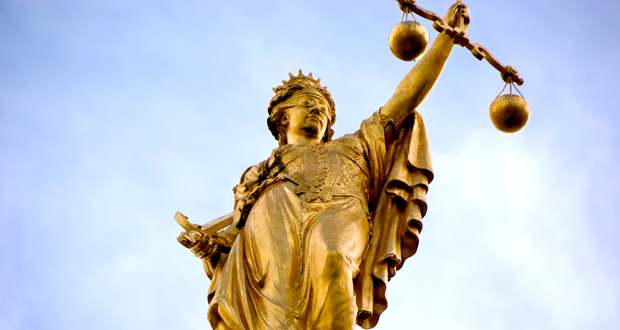 Justice: The Epitome of Islam

O ye who believe! Stand out firmly for Allāh, as witnesses to fair dealing, and let not the hatred of others to you make you swerve to wrong and depart from justice. Be just: that is next to piety. And fear Allāh, for Allāh is well-acquainted with all that ye do.[1]

Justice is an ideal that has resonated throughout history, across all societies and cultures. But what is justice? When it comes to defining justice, many have a range of perceptions, closely linked to the injustices they see and experience around them. Justice may be collectively desired, but it is individually experienced. The rule of law, a cornerstone of good governance, requires that laws be in place to hold everyone to account, from the individual up to the government. It requires that laws are ‘publicly promulgated, equally enforced and independently adjudicated.’

In the iconic image, Lady Justice holds in her half-raised left hand a pair of scales, so as to weigh the evidence led by the contending parties before the court. The Victorian concept is based on the assumption that justice is blind, that she performs her task without fear or favour, and does not go by the appearance of the parties arraigned.

One may ponder the symbolism of this depiction, however. How do you see which way the scales of Justice tilt, if your eyes are blindfolded? How do you wield the sword of punishment with your eyes deliberately closed? In your blind fury for doing justice, how do you ensure you do not strike at the innocent party instead of the guilty? Furthermore, the delay involved in the process of arriving at the decision will freeze the right arm and shoulder of Lady Justice, as also her left elbow, holding aloft the sword and pair of scales.

With clear eyes (and a clear head) Lady Justice would see with unbiased vision, looking intently at the ever tilting scales held in her left hand. She holds the hilt of the sword in her right hand. The tip of the sword is resting on the ground near her feet, so that her right arm and shoulder are not frozen stiff by the necessary delay involved in the trial. After considering the evidence, Lady Justice is left free to wield the word swiftly, and strike the guilty party. Being clear eyed, she cannot by mistake or accident, strike the innocent.

The Qur’ān repeatedly reiterates the balance of justice,

”And the Heavens He has raised high, and He has set up the Balance (of justice); in order that you may not transgress (due) balance. So establish weight with justice, and fall not short in the balance.”[2]

Justice is the cardinal value of any civilized society. More than any other element, arguably it is justice which has been the cornerstone, and bedrock of all great civilisations. Without justice, the entire bulwark of society would crumble. There would be utter chaos and confusion and people would have to live in constant fear and mental distress if justice were to fade away from society.

The Islamic concept of justice is based on the divinely ordained right of human dignity:

“We have certainly honoured the children of Ādam.”[3]

If honour and dignity is a common heritage of mankind, then it is only logical that they all must be treated with it. It is important to remember that one of the attributes of God mentioned in the Qur’ān is ‘Adl, that is justice, which denotes placing things in their rightful place. The Qur’ān says,

“God does command you to render back your Trusts to those to whom they are due; and when you judge between man and man, that you judge with justice.”[4]

Justice is also closely associated with moral rectitude and fairness, necessary ingredients to build an equitable system that leaves no room for any section of the community to feel burdened or discriminated against. In fact, the Qur’ān uses strong language to denounce those regimes that divide people by applying differential treatment. Allāh says,

“Indeed, Pharaoh exalted himself in the land and made its people into factions, oppressing a sector among them, slaughtering their [newborn] sons and keeping their females alive. Indeed, he was of the corrupters.”[5]

The fact that the commands to do justice and shun inequity have been repeated more than 55 times in the Qur’ān, gives an idea of the overriding importance of justice and equity. The duty to do justice is paramount and no extraneous considerations like personal hatred are allowed to colour the judgement. Not just hatred, other considerations like personal interest, kinship or the high or low standing of the person concerned, shall have no bearing on doing justice. The directive is clear to,

“Stand out firmly for justice, as witnesses to God, even as against yourselves, or your parents, or your kin, and whether it is against rich or poor.”[6]

In verse after verse, the Qur’ān implores mankind not to swerve in the performance of justice.

“Indeed, Allāh does not wrong the people at all, but it is the people who are wronging themselves.”[7]

“Surely Allāh does not do injustice to the weight of an atom, and if it is a good deed He multiplies it and gives from Himself a great reward.”[8]

“And He gives you of all that you ask for. But if you count the favours of Allāh, never will you be able to number them. Verily, man is given up to injustice and ingratitude.”[9]

“And if two parties among the Believers fall to fighting, then make peace between them both: but if one of them transgresses beyond bounds against the other, then fight you (all) against the one that transgresses until it complies with the Command of Allāh. Then if it complies, then make reconciliation between them with justice, and be fair: for Allāh loves those who are fair (and just).”[10]

The Qur’ān clarifies that in matters of justice, even the proclaimed faith of a person cannot help him to avert punishment if he is found guilty. It sternly warns those who show partiality on account of religious affinity and defend a wrongdoer:

“We have sent down to you the Book in truth, that you may judge between men, as guided by God: so be not (used) as an advocate by those who betray their trust.”[11]

The commentators explain this verse with reference to the case of Ta’mah b. ‘Ubayriq, a Muslim of Madīna who was suspected of having stolen a shield and later planted it in the house of a Jew, where the property was found. Some Muslims sympathised with Ta’mah, but the Prophet (sallAllāhu ‘alayhi wasallam) ruled in favour of the Jew who had been falsely implicated.[12]

As a measure of special caution, the Qur’ān exhorts Muslims to be just in dealing with all non-Muslims who do not indulge in injustice and persecution:

“Allāh does not forbid you from those who do not fight you because of religion and do not expel you from your homes – from being righteous toward them and acting justly toward them. Indeed, Allāh loves those who act justly.”[13]

The Qur’anic injunctions on justice and fair dealing are reaffirmed in a multitude of prophetic and scholarly narrations. One tradition quoted by Iāam Ghazāli in his book, Advice to Kings, is particularly revealing:

[12] Mentioned in Tafsīr al-Tabari, al-Bahr al-Muhīt and others.

Moin Qazi is a well known banker, author and journalist. He holds doctorates in Economics and English. He received an Honorary DLitt at the World Congress of Poets in Istanbul in 1991. He is author of several books on Islam including bestselling biographies of the Prophet Muhammad and the Caliph Umar. He writes regularly for several international publications and was Visiting Fellow at the University of Manchester. He is also a recipient of UNESCO World Politics Essay Gold Medal and Rotary International’s Vocational Excellence Award. He is based in Nagpur and can be reached at [email protected]

Moin Qazi is a well known banker, author and journalist. He holds doctorates in Economics and English. He received an Honorary DLitt at the World Congress of Poets in Istanbul in 1991. He is author of several books on Islam including bestselling biographies of the Prophet Muhammad and the Caliph Umar. He writes regularly for several international publications and was Visiting Fellow at the University of Manchester. He is also a recipient of UNESCO World Politics Essay Gold Medal and Rotary International’s Vocational Excellence Award. He is based in Nagpur and can be reached at [email protected]