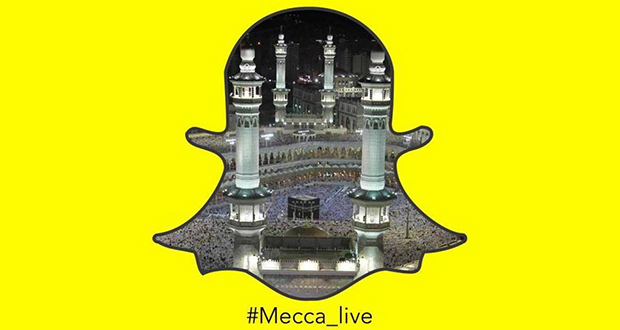 This year, I had the enviable fortune of being in Mecca on the 27th night of Ramaḍān. The atmosphere was electric and the recitation deeply moving. There is a secret heaven inside the heart of a believer, yet this must be the closest a believer will ever outwardly feel to heaven. I raise my gaze during a dedicated moment of tawāf and notice an assembly of excitable worshipers armed with iPhones. They were taking selfies from the rooftop. Snapchat was running a MeccaLive story.[1] The global conversation that followed is the interest of this article. 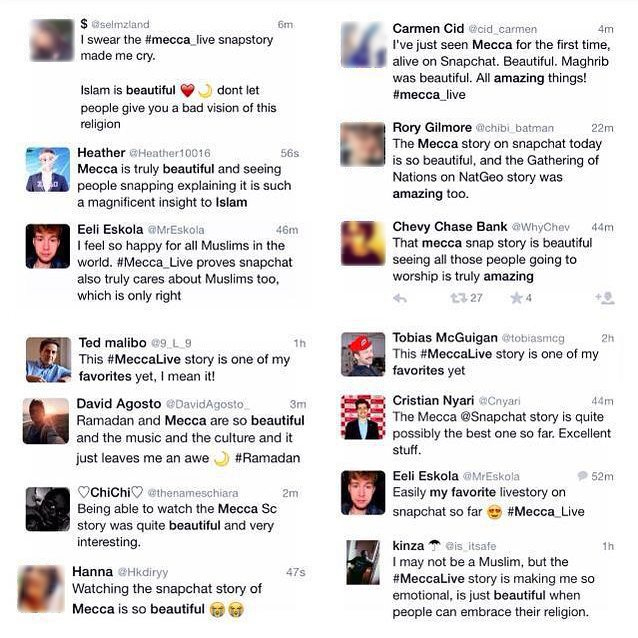 The architecture of worship in our Islamic faith has a sweet purity to it. There is an energising tension between the outer and inner worships, through which we experience Allāh (subḥānahu wa taʿālā). Islām is a fiercely private project, yet a radically social one too. In this piece, I argue that our ritual schema bounces between both opposites so that we may realise the full glory of Allāh. I organise my discussion around the recent MeccaLive story, and suggest that its evangelic success has invited us to relearn this critical nuance in our faith, and how we call to it. I argue that religion in the West has been crudely privatised, and that MeccaLive restored the appeal of a ‘de-privatised’ religion. I conclude that our da’wah has become messy – politically complex and frustratingly academic. MeccaLive reminded us how embarrassingly out of touch we are with what appeals to the basic human condition (the fitrah) in our da’wah. This article ends with a plea to revisit sophistication in prophetic simplicity.

One of the glories of Islām is that it navigates the believer between spiritual dichotomies; the private and public, the inward and the outward. For instance, fasting is a very private event, as is i’tikāf. Yet, tarāwīh and the breaking of the fast are both emphatically social events. This erratic spiritual journey characterises the life of a believer. It is less a relationship of tension, than one of rediscovery of who Allāh is. He is al-Dhāhir, and al-Bātin – the Lord of the outer and inner spaces and He will guide us through all His names until we truly know Him. His glory will be realised at both extremes – in our most intimate reflections, and at our most socially energised moments. Those who know Allāh know that He is greater than to be celebrated in only one of the two spaces. This is obvious to the believer. Understanding this is central to appreciating the success of the MeccaLive story and why it touched such deep human sentiments.

One of the greatest challenges to faith in the modern world is the privatisation of religion. This privatisation consists chiefly in the elimination of religion’s naturally communitarian character. It makes each of us a voice crying in the wilderness, thereby removing cultural support for religious life as a social project. For this reason, one of our most urgent goals must be the restoration of a public celebration of faith. MeccaLive, I argue, begins this journey for us – if we let it.

I suggest that the success of MeccaLive rests in the very outward and public celebration of faith that we have lost in the post-modern World. The arrangement of believers in perfect rows to prostrate their foreheads on the ground to Allāh is a monumental and historic moment each time it happens. The World’s fascination with MeccaLive reminds us of this truth. It also pulls us as Muslims to rediscover a spiritual treasure that we have lost in our own monotonous practice of faith. Through it, we relearn the refreshing centrality of the prayer to our human ‘fitrah’. MeccaLive was successful because it unlocked a religious imagination that was public. It ‘de-privatised’ faith. Not only did it show it was possible… but that it was beautiful.

This emphasis on public displays of faith is supported in our tradition. There are cogent wisdoms of three of the five pillars of faith being energetically social in nature; namely, Salāh (ritual prayer), Zakāh (charity) and Hajj (holy pilgrimage). They all require us to leave our homes at some point, engage with our context, and publicly celebrate the glory of faith. This is not a trivial point. Not only must we not forget this, we must collectively make a point of emphasising it. To not do so is to allow faith to slowly be eclipsed by the fast-paced unforgiving secularist machine.

French anthropologist Emile Durkheim makes a profound point here. He holds that the more we as people engage in a global economic market with each other, the more we begin to loosen the traditional bonds of religion and moral solidarity that had previously ensured our social integration (Durkheim, 1912). Such is the power of the predatorial capitalist project. I argue that it is only by being pre-emptively confident about what our faith represents in the public space, married with a coherent return to prophetic simplicity can we resist, or even reverse this formidable secularising process.

As a minority community in the UK, I feel we must do more to collectively discover the simplicity of the human condition (fitrah) that MeccaLive unearthed for us. We must celebrate initiatives that speak to such human sentiments. The Ramaḍān Tent Project[2] is one of these grass-root initiatives in London. It hosts a public iftār gathering each day of Ramaḍān for anyone, Muslims and Non-Muslims alike, to feast together at sunset and experience the refreshing community spirit that Islām pulls us to. To openly celebrate and invite to our faith in this way is a social necessity. It potently reminds us that Allāh is ever relevant in both our private and public lives. It ‘socialises’ faith at the most fundamental level, and challenges any humiliating regression of faith into the lonely private space.

In considering the question of this article, we take great lesson from the publicity the Prophet (sall Allāhu ʿalayhi wa sallam) afforded the Eid prayers. Eid prayers in our tradition must be performed out in the open; a consequence of this being that the non-Muslims witness the manifestation of Allāh’s symbols. There seems to be keenness on the Prophet’s part that the ritual beauty and growing numbers of the Muslim tapestry are seen. He extraordinarily instructed the menstruating women to go out and attend the public gathering, too. He wanted to draw attention to what will eventually unfold as a sea of believers prostrating their heads to their Creator – not a trivial moment. I argue that it is sights such as these that move the human sentiments most intensely, not the academic materials that we may put together ourselves, or pamphlets that we may shove in people’s hands.

Our da’wah has become unnecessarily elaborate and needs desperate revision. The prophetic simplicity needs to be reintroduced into our narrative, in both its private and public categories. I ask that we revisit what I call in this article ‘Prophetic Da’wah’, which I define as the calling to Allāh and the five essential pillars of Islām only. We need to learn that the relationship between these categories is less one of tension, than of rediscovery of ourselves. We all have within us our ‘fitrah’; the purest aspect of our soul. It knows one thing for certain; this is Tawḥīd in its most urgent and paradigm-shattering form. It is accessible to every human being without exception. The human condition immediately recognises it and speaks fluently to each of the five pillars of Islām. That is the perfect favour of Islām over us, and hence why our Da’wah must be organised around it. To not do so, is to misunderstand the Islamic project that Muḥammad (sall Allāhu ʿalayhi wa sallam) came with.

It frustrates me to see Muslims zealously circulating political arguments purporting to remove ‘misconceptions about Islām’. Political or academic Islām is not what I find problematic; they both have crucial roles to play. What I find problematic is when we, as people engaged in the Da’wah space, allow ourselves to think this can replace ‘Prophetic Da’wah’ as a call to Allāh. There seems to be an academic embarrassment to talk about ‘simple’ Tawḥīd. This disorientation simultaneously terrifies and bores me. It terrifies me because Allāh is rarely mentioned in the discourse, and it bores me because I cannot get myself worked up about something that fails to situate itself in God. The opening call of the Prophet was a simple instruction to ‘announce that there is none worthy of worship besides Allāh, and you will be saved’. Allāh is not called to through politics or academics, but through Himself. This is not discounting the necessity for Muslims to be politically or academically engaged – we must. It is an attempt to reclaim the purity of the ‘Prophetic Da’wah’, and untangle it from the quagmire of projects masquerading as Da’wah to Allāh, but in reality call to anything but.

We must rediscover sophistication in prophetic simplicity. The Prophet advised us in the hadīth[3] that the architecture of Islām is built upon five pillars. These five pillars are genius constructs in that they speak to both our private and public human conditions. As we journey through these pillars, in both their private and public manifestations, we learn who our Lord is and we wonderfully connect with the Absolute. Our da’wah must necessarily be organised around the beauty of these pillars – we do not need to go much further than this to be convincing. The MeccaLive story is a case in point. It presented a spectacular moment when non-muslims rediscovered the beauty of faith, and it embarrassed our own fickle efforts. We have failed so far in unfurling this reality, and Snapchat succeeded.

Islām has a very deliberate social face that we must relearn. It is religiously immature to think a social display of our faith in any way conflicts with our sincerity – rather it is a requirement of it. We are on a colourful journey to Allāh that extends beyond our private spheres. My greatest worry is not that we fail to realise this empowering social possibility of faith. My greatest worry is that we do realise it, but we relegate it as trivial. Hence, in our tragic ignorance, we fail to share it with the rest of humanity.