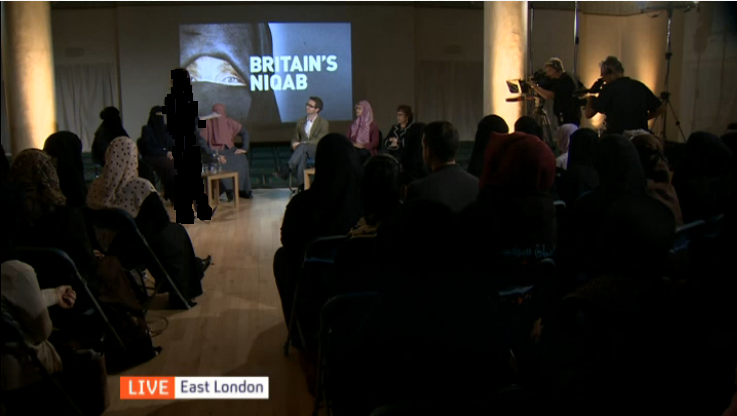 What doesn’t really seem to add up is that even though Islam seems to be the least appealing way of life for women, more and more intelligent, educated, independent women are actually choosing to become Muslim.

Visit the Spotlight: Anti Niqab page for all our Niqab articles- click here

Last night saw an attempt by Channel 4 to host an open, balanced debate on the Niqab in Britain held at East London Mosque.

The show was called, ‘Debate: Should British women wear the niqab?’ in which Jackie Long hosted a debate on the niqab with a panel including author of, Secrets of a Muslim Woman, Fatima Barkatulla (available below), writer Shalina Litt, activist Sahar Al-Faifi and Islamophobes Douglas Murray, Khola Hasan and Yasmin Alibhai-Brown.

Incase you missed it, you can watch it here and hear sister Fatima Barkatulla’s responses.

When people see a Muslim woman on the local High Street, covered from head to toe, exposing nothing but her eyes or her face and hands, all sorts of thoughts and images enter their minds:

Burkah clad victims who hide their bodies away out of shame, forced marriages and honour killings, suppression and oppression of women – things that Islam totally condemns but some crazy Muslims are guilty of.

Feelings range from curiosity and pity, to complete horror at what looks like a religion that deems women inferior. What doesn’t really seem to add up is that even though Islam seems to be the least appealing way of life for women, more and more intelligent, educated, independent women in the West feel that Islam showed them what it was to be true to their womanhood and are actually choosing to live as Muslims.

Now why would they want to do that?

Our response to all those who favour the Niqab ban is to meet Fatima Barkatullah, a busy mum of four, a journalist and a Londoner born and bred. This is your chance to unveil the mystery and hear from her; a Muslim woman, in her own words, how Islam affects her experience of womanhood at www.SecretsOfaMuslimWoman.com

We also advise the viewers to visit islam21c’s spotlight Niqab page dedicated to countering the narrative against the niqab. Visit the page here