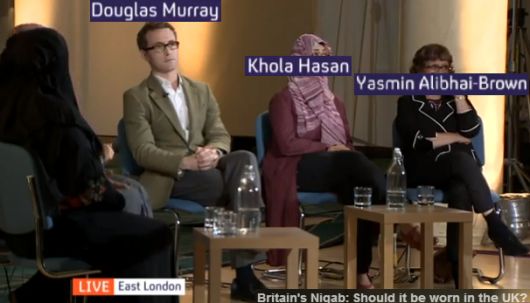 Is it not rather strange and incomprehensible that one (Douglas Murray) who claims to loath the so called intolerance of Muslims and who according to the above is a staunch believer in freedom of expression would want to dictate what a tiny minority of British women wear? Hardly a beacon of tolerance himself then.

Visit the Spotlight: Anti Niqab page for all our Niqab articles- click here

This week Channel 4 aired interviews and a debate on the British Muslim women who choose to wear the face veil or niqab. One of the highlights of the series of programs was a panel debate, with audience participation and which consisted of those for and against a potential ban on wearing the face veil in Britain.

The debate filmed in East London Mosque was eagerly attended by many niqab wearing women who hoped that for once their voice might be heard. Sadly, the debate was only 20 minutes long so many members of the audience did not get the opportunity to speak. However, I do congratulate Channel 4 for giving a voice to niqab wearing women, as British people seem to find the face veil a suitable topic for discussion, the views of niqab wearers themselves are seldom heard. I am sure the range of women taking part in the debate dispelled the idea that Muslim women and above all face veil Muslim women are oppressed and are not contributing or participating in society.
The pro niqab panellists were very educated (in both secular and Islamic knowledge) Muslim women who clearly had a lot to say on how they managed to be both contributing members of the community and follow their religious beliefs whilst in many cases both working and raising families. The opposition to the freedom to wear niqab panelists were Douglas Murray a notorious Islamophobe, Yasmin AliBhai Brown and a Muslim woman who used to wear niqab but who now wears hijab (head scarf) so therefore in my opinion was sitting in the wrong place as she was not an all out Islamophobe. Also, this lady’s views seemingly have been formed out of her own negative personal experience of wrongly believing it was mandatory to wear a face veil, which it has to be said is not an accurate depiction of the experience of the majority of niqab wearing women in the U.K.

Let us look a little closer at Douglas Murray…

He is an associate director of the Henry Jackson Society, the far right Neo Conservative, Pro Israel ‘think tank’, (previously The Centre for Social Cohesion). The H.J.S. were accused of whipping up a climate of fear against Muslims in Britain in the report The Cold War on British Muslims by Spinwatch. Writing about the debate in the Spectator, Mr Murray says “One – during the show – even started quoting the Human Rights Act, as though someone who dresses and acts according to their interpretation of the alleged insistences of a 7th century warlord should not think it wholly inconsistent to also pick and choose from modern European law”. Does Mr Murray mean that Britain’s wearing the clothing of Abrahimic religions such as Islam should live solely by Shariah law in Britain and not quote the laws of the land, which we in any case live by? Or does he mean Muslims who wear Islamic clothing should be excluded from the Human Rights act?

Here, writing about Islam and Muslims, he said…

Is it not rather strange and incomprehensible that one who claims to loath the so called intolerance of Muslims and who according to the above is a staunch believer in freedom of expression would want to dictate what a tiny minority of British women wear? Hardly a beacon of tolerance himself then. Hardly surprising that some of the more feisty Muslim women in the audience shouted him down for his belief that it is his right as a man to comment on women’s clothes.

Another anti niqab Panellist Yasmin AliBhai Brown on Wikipedia is described in the following way:-

“Yasmin Alibhai-Brown (born Yasmin Damji on 10 December 1949) is a Ugandan-born British journalist and author, who describes herself as a “leftie liberal, anti-racist, feminist, Muslim.”

Now, this becomes very confusing. How is Yasmin describing herself as a leftie liberal? Surely the left traditionally were a group who claimed to be inclusive? Can one be inclusive and Islamophobic at the same time?

It has to be mentioned here that in my opinion Yasmin is being somewhat duplicitous to market herself as a ‘Muslim’ commentator on the panel as she belongs to a very obscure sect of Islam which is deemed heretical by the majority of Muslim scholars. I would like to know what it means to Yasmin to be a Muslim if she is against the values that the majority of Muslims hold dear? Does Yasmin love Allah and how is that worship of Him demonstrated inwardly and outwardly in her life or is she describing herself as a Muslim merely as a means of making herself popular amongst the liberal progressive left? Does Yasmin see a Muslim when she looks in the mirror?

Described on Wiki as a liberal, we have to ask ourselves how does the notion of liberalism fit in with wanting the Government to legislate on women’s clothes?

Traditionally, the left represented the working classes and since the women on the pro niqab side of the panel and in the audience were describing what they did for a living, surely they would be described as working class? Why does Yasmin’s left not include them?

Furthermore, if Yasmin claims to be a feminist, how does she feel about what are mostly male politicians debating and deciding what women can and cannot wear? If I want to retain my uniqueness as a Muslim woman wearing the niqab where I can view and participate in the world without revealing too much of myself, why can I not be a feminist too? What kind of feminist is Yasmin who wants to deny me that right?

Whilst the issue of niqab is up for national debate in Britain, it seems we are not really living in a free and tolerant society. In fact the so called freedom and tolerance we are debating is just a mirage.

Notes:
Source: https://islam21c.com/
Islam21c requests all readers to share this article on your facebook, twitter, and all other platforms in a bid to spread our efforts