The Stupidity of Comparing Hijab to Pole Dancing 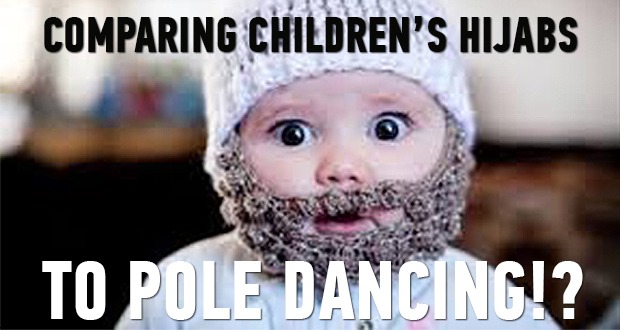 The hijāb is a concept which goes beyond the sublunary. It connects to the spiritual by obliterating worldly expectations in favour of conformity to that which is most pleasing to Allāh, Most High. It is, for many Muslim women, attuned to their faith, a source of comfort and a means, like other religious dictates, to become closer to Allāh.

Naturally, the bond that forms between mother and daughter is unlike other relationships.  It does not require studies to prove that children imitate their parents.[1] Fathers will often speak of their sons asking when their beards will sprout.  Similarly, little Amīna, ʿĀ’isha or Āsia, seemingly occupied with her toys, will often be seen keenly observing mummy as she wraps her shawl around her head and perhaps dons the niqāb. It is not too long before said child asks, “Where’s mine?” To deny her interest would deny something beloved to Allāh. Of course, it is not obligatory, but watching your child go sparkly-eyed over any aspect of faith brings joy to the heart of any Muslim parent.

Jarring with this reality are the screeching interjections of one particular self-described “Muslim feminist” regarding a spat between Muslim parents and a Birmingham school.[2][3] The school has prevented a pupil from wearing the hijab, purportedly in line with the school’s policy.

According reports in the media,[4] the Catholic school had instituted a new uniform policy since September, forcing young Muslim girls who did wear the headscarf in school to remove it. This contrasts with Sikh children who can continue to wear the turban.  Based on this brief analysis, it does seem like the school policy has resulted in indirect discrimination; the policy applies to all, but its effect is largely limited to Muslim girls.[5] Parents of the young pupil as well as other parents have pointed out that the pupil herself wished to wear the headscarf. The school has threatened the pupil with punishment such as exclusion from breaks, swimming lessons and class trips. A parent has stated that the four-year old was feeling “absolutely devastated” and “went home crying and really upset.”

The disproportionate behaviour towards a young school girl, or her mental state after experiencing exclusion, is unfortunately not the concern of such “Muslim feminists”. The Muslim-bashing seems to have been taken with a series of subjective and irrational pronouncements.

Though it is true that the hijāb is not a requirement for prepubescent girls, the conclusion that the “criticism” of the school “had been unfair” ignores the fact that the hijāb is still an aspect of general Muslim culture. Government guidance on the Equalities Act 2010 in the context of schools highlights the need for schools to “be sensitive to the needs of different cultures, races and religions and act reasonably in accommodating these needs”.[6] Also, the fact that Sikh children can continue wearing their turbans exasperates the insensitivity and discrimination on the part of the school, despite the religious encouragement of Sikhs to wear a turban confusingly characterised as a racial trait.

The statements released as a result of this demonstrate an unhealthy obsession with doing away with the hijāb. The belief that “we should let children be children” suggest that pieces of cloth, which, in addition to covering the body also happen to cover the head, magically turn children into something else.  Such charming commentators have also said they “personally” do not like to see the wearing of hijābs among young girls “normalised”, turning into a feminist fashion police and dictating to Muslims which of their practices are considered the norm. In doing so, they are of course effectively exerting control over mainstream Muslim women.

Worse still (considering their claim to feminism), they shockingly employ the argument that echoes victim-blaming:

“I would personally not like to see it normalised for four and five-year-olds to be wearing headscarfs… In the current climate there is so much negativity towards Islām.”

Read: Muslims must behave in a manner in which they are second-class citizens, not entitled to exercise their cultural and religious rights like other communities. Rather, they should capitulate to a bigoted atmosphere.  Common sense would dictate that the bigoted climate should be challenged and the feminist pious preaching re-directed at those who perpetuate the “current climate”. As it is, these statements are a worrying message to the Muslim community.

The rational disintegration is most acute with a particularly gut-wrenching soundbite in which it is argued that Muslim parents who make young children wear the hijāb should be challenged like parents who spray tan or give pole dancing lessons to young girls. According to this ideological imposition, the purpose of the hijāb is designed to discourage “unwanted sexual attention”, therefore sexualising children.[7]

Among the many points that were studiously ignored, was the fact that the pupil was not forced to wear the hijāb and how Muslim parents actually see their child in a headscarf. This soundbite was, however, proudly proliferated in the Daily Mail, Express, and other right-wing trash outlets.[8] It demonstrated the affinity such narratives, which contain coded Orientalism (girls wearing hijāb must have been forced to do so to fend off those uncontrollable savages around them), have with papers with a history of Islamophobic reporting.

A close analysis reveals that the argument is actually quite ridiculous. If, as is claimed, the hijāb discourages sexual advances, how exactly does this translate as sexualising a child? It logically does not follow. It is like arguing a safeguarding lesson for children on child grooming is paedophilic. Indeed, why cover up at all? Public genital exposure would be considered “indecent exposure” falling foul of the Sexual Offences Act 2003 and possibly the Public Order Act 1986. Clothing small children would therefore be considered a form sexualisation. The argument is completely absurd. This is before one even considers the arbitrariness of western normative practices of “covering” in public—how would these people react if those cultures where it is “normal” for women to walk around bare chested, were to paint a simple blouse as “sexualising”?

Moreover, there is absolutely no moral equivalence between a woman dancing about a pole, which is inherently associated with the gross sexualisation of women, and the Islamic concept of the hijab which, in fact, raises a woman above such base desires and de-materialises her. Only a seriously deluded moral compass would attempt to analogise two notions which are conceptually diametrically opposed.

I would argue that this is to be expected from a “Muslim feminist”. Feminism is an ideology which is volatile enough to produce adherents that claim strip clubs are completely in tune with feminism.[9] It also produces the likes of those who would seem to oppose it. No amount of “intersectionality” deflections or denial of particular interpretations negates the fact that such ridiculous positions are all valid in the wasteland of feminism. While it has provided women the right to vote and equal opportunities, when it comes to providing a coherent moral compass, feminism has quite miserably failed. Instead, it offers incoherence derived from the debris of male society.  Those women who seek to “fix” Islām through broken, intellectually unconvincing ideas would do better dedicating their efforts to sorting out feminism first. They should also ponder the motivations of the actions and agendas they profess which, ironically, exploit them as “weapons” of the state.

Given a certain commentator’s well-known involvement in the neo-conservative countering violent extremism (CVE) agenda,[10][11] consideration should also be given to how this agenda abuses Muslim women. There has been an effort to integrate the “gender dimension” into the agenda, thus securitising issues related to Muslim women. Describing this agenda as a form of weaponisation of Muslim women, a recent analysis which looked at Prevent and its international variant CVE,[12] revealed how Muslim women were being used as tools to “penetrate communities more deeply” for Prevent purposes. Yet the very same “British values”-based Prevent policy is also being used to drive the discussion on integration. Louise Casey has, as part of her review into integration, described it as “common-sense” that Muslim families be viewed as suspicious if their women wear the hijāb, jilbāb and niqāb.[13]

For us Muslim women caught between the saviour feminists pouring pity while attacking Islām and the right-wing modern day colonialists wishing to eradicate our faith through securitisation, sanctuary remains firmly within the domain of Allāh. Our rights and responsibilities and rights and wrongs are set by a source of stability which is unmatched.

“If We had sent down this Qur’ān upon a mountain, you would have seen it humbled and coming apart from fear of Allāh. And these examples We present to the people that perhaps they will reflect.” [14]