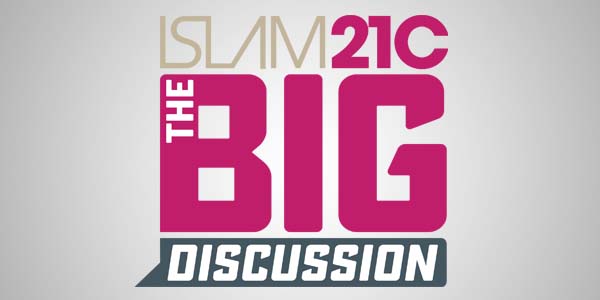 Over the years Islam21c has done more than 18 Big Discussions, benefitting tens of thousands of audience members and online viewers alike, by the grace of Allah. This weekend Islam21c will be hosting three of its flagship BIG Discussions, inshaAllah, at this year’s Family Retreat! Our expert panellists will be tackling the tough questions our audience have on the following topics. If you have questions that will stimulate important discussions then let us know in the comments below!

The government’s confused definitions of ‘extremism’ revolve around an opposition to so-called ‘British values’, and as a result this phrase has been at the core of much propaganda and policy. A hegemonic discourse has emerged wherein Muslims’ opinions and values are interrogated to see how well they stack up next to this benchmark of some people’s interpretations of ‘British values’.

This BIG Discussion invites an expert panel to look at the concepts of Democracy, Equality, Individual Liberty, Rule of Law and Mutual Respect & Tolerance of different faiths, and consider whether these are in fact ‘British values’ or universal values that Islam endorses, and if so, to what extent.

Importantly, this panel will also critique the cultural, social and political milieu from which this question of comparing ‘values’ has emerged; from the cultural imperialism of the colonial era to the neoconservatism of today.

One of the ways in which Allah has made His divine guidance eminent over all others is its enlightening and nuanced approach to moral reasoning. In this BIG Discussion we host a unique one-on-one interview in which we delve deep into the mind of an accomplished Islamic jurist who, on a daily basis navigates the volatile terrain of implementing Islamic ethics in an ever-chaotic world.

We will discuss the difference between values, morality and ethics, and how Islam juggles them in day-to-day life with examples, especially when faced with moral dilemmas or contradictions. We will talk about the difference between doctrinal principles and their implementation in real life, the balance between dogmatism and pragmatism, as well as critically analysing the potential problems with the way Islamic fiqh has been codified and taught today.

Why are student “loans” allowed and not ‘Islamic’ mortgages?

Why are we so strict on prayer times but lenient on moonsighting?

How do we reconcile statements from the early Muslims with new realities?

Can I do something haram to gain a benefit?

Do I have to speak out against every evil I see?

We will probe the mind of the Islamic jurist for these questions and more, inshaAllah.

Whenever one civilisation comes into contact with another, there is an exchange between two different ‘stories’. Values, morals and cultural norms form part of these stories, and without a genuine, balanced conversation, people cannot learn from one another.

The stories surrounding Muslims in the 21st century are inevitably coloured by the history of many other nations and peoples. Frantz Fanon in The Wretched of the Earth provided a psychiatric analysis of the dehumanising effects of colonisation on the colonisers and the colonised, and our expert panel will unwrap the relevance of this analysis and others to the 21st century Muslim experience.

This BIG Discussion panel will also look further back beyond colonialism into earlier historical examples of when Muslims came into contact with unfamiliar values and influences, and the plethora of responses from within the ummah and without, and the impact on Muslim thinking.

In this BIG Discussion an expert panel will discuss where values come from, how we discover them, the relationship between values, morals and ethics, and much more.