The Birmingham Fragments: a profound message to Britain we failed to deliver 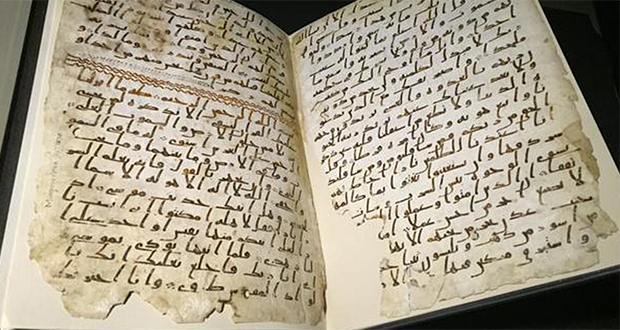 In October this year, the University of Birmingham will showcase one of its greatest treasures – the recently discovered manuscripts of pages of the Qur’ān, thought to be the oldest in the world. For the Muslims, though it may be uplifting to ponder that the verses have been written by someone who may have witnessed the Prophet Muḥammad (sall Allāhu ʿalayhi wa sallam), the wonders of the Qur’ān have always lain in the sublimity of it verses, the perfection of its teachings and the sheer beauty of its recitation. The Qur’ān is the enduring miracle that Allāh revealed to the Prophet Muḥammad. Why a miracle? Because the power of its message and clarity of its arguments can lead to only one rational and honest conclusion: that this is not the speech of a man, but words revealed by God to a man in Arabia, for all of humanity, for all posterity.

Muslims will be familiar with the verses in the Birmingham fragments: verses 23 to 31 from chapter 18 (Sūrah Al-Kahf; The Cave); and from verses 91 of chapter 19 (Sūrah Maryam, or Mary) to verse 13 of chapter 20 (Sūrah Ṭā Hā). On these pages, the Qur’ān speaks to the Christians, to the Jews, and to Islām’s opponents with words that we as Muslims may not have plucked up enough courage to convey. And also on these pages is a much needed reminder for us, with words of Divine solace and counsel coinciding with a time when Muslims in the West are feeling increasingly maligned and insecure.

Before Britain sets out to exhibit these pages to the rest of the world, let her people ponder upon the meaning of the verses, for the greatest wonder of the Qur’ān is neither in the beauty of its script nor the resilience of the parchment it is written on, but in the resilience of its message.

A Message To Christendom:

On the parchment to the left of the images in the news are the verses from Sūrah Maryam (or Mary). Herein, and poignantly on the land that is home to the Anglican church,  is an unequivocal message to Christians that all too often is not made clear in many a multi-faith meeting:

And they say, “The Most Merciful has taken [for Himself] a son.”

You have done an atrocious thing.

That they attribute to the Most Merciful a son.

And it is not appropriate for the Most Merciful that He should take a son.

There is no one in the heavens and earth but that he comes to the Most Merciful as a servant.

He has enumerated them and counted them a [full] counting.

And all of them are coming to Him on the Day of Resurrection alone.

Indeed, those who have believed and done righteous deeds – the Most Merciful will appoint for them affection.

So, [O Muḥammad], We have only made Qur’ān easy in the Arabic language that you may give good tidings thereby to the righteous and warn thereby a hostile people.

And however great we think we are, or have been, as a nation, here is a reminder that powers and empires come and go, and we are only a blip in the timeline of history:

And how many have We destroyed before them of generations? Do you perceive of them anyone or hear from them a sound?

A Reminder to the Jewish Community

Muḥammad (sall Allāhu ʿalayhi wa sallam) as an Arab would have had little need to extol Mūsa (Moses), a prophet of the Jews, a rival lineage; he was having a hard enough time getting his own Arab clansmen to accept him, let alone having to persuade them to believe in over a dozen Prophets from the house of Israel. Mūsa is mentioned 136 times in the Qur’ān by name, more than any other Prophet.  If Muḥammad (sall Allāhu ʿalayhi wa sallam) was motivated by political power, as some accuse him of, then he would have sought, as politicians do, to gain support by disparaging and putting down a rival.  But Muḥammad could only have been a Prophet receiving revelation from the same God who chose Mūsa as a Prophet, and no other theory holds water. And if there is any group in society that should recognise the truth of the Words of their Lord in this book, it should be Jewry.

But only as a reminder for those who fear [ Allāh ] –

A revelation from He who created the earth and highest heavens,

The Most Merciful [who is] above the Throne established.

And if you speak aloud – then indeed, He knows the secret and what is [even] more hidden.

Allāh – there is no deity except Him. To Him belong the best names.

And has the story of Moses reached you? –

When he saw a fire and said to his family, “Stay here; indeed, I have perceived a fire; perhaps I can bring you a torch or find at the fire some guidance.”

And when he came to it, he was called, “O Moses,

Indeed, I am your Lord, so remove your sandals. Indeed, you are in the sacred valley of Tuwa.

And I have chosen you, so listen to what is revealed [to you].

Indeed, I am Allāh. There is no deity except Me, so worship Me and establish prayer for My remembrance.

Indeed, the Hour is coming – I almost conceal it – so that every soul may be recompensed according to that for which it strives.

A Reminder to the Muslims

And never say of anything, “Indeed, I will do that tomorrow,”

Except [when adding], “If Allāh wills.” And remember your Lord when you forget [it] and say, “Perhaps my Lord will guide me to what is nearer than this to right conduct.”

Muslims in Europe have a growing sense of insecurity, with a burgeoning far-right, worsening Islamophobia and an uncertainty as to how they will be able maintain their Islamic identity and beliefs in an increasingly hostile continent.  A reminder to the Muslims comes on the right sided parchment that carries verses 24 to 31 of Sūrah Kahf, or the chapter of The Cave. This is a chapter well known to Muslims who recite it every Friday.  This chapter informs us of the events surrounding a handful of young men, who, fearing religious persecution from a society that wanted to change what they believed, sought refuge in a cave.

And they remained in their cave for three hundred years and exceeded by nine.

Say, ” Allāh is most knowing of how long they remained. He has [knowledge of] the unseen [aspects] of the heavens and the earth. How Seeing is He and how Hearing! They have not besides Him any protector, and He shares not His legislation with anyone.”

The Qur’ān was revealed by Allāh to the Prophet Muḥammad, and there is not a single plausible alternative explanation as to the source of the Qur’ān. And among the proofs of its source and authenticity is the fact that it has remained unchanged for 14 centuries. These parchments, almost miraculously, are a testimony to the words that follow:

And recite, [O Muḥammad], what has been revealed to you of the Book of your Lord. There is no changer of His words, and never will you find in other than Him a refuge.

Last week, the Britain’s Prime Minister laid out how, under the pretext of fighting extremism, he would like, in his words, to “enforce our values right across the spectrum.”  So too does China, in its own terms, enforce its own values upon the Uighurs, stopping Muslims from fasting so as to maintain common Chinese values. Muslim values, of what is right and wrong, of what is moral and immoral, of what is just and unjust, are older than the pages on display. No set of values can be greater. And these values are immutable. So how should Muslims react in a climate that increasingly resembles a British Inquisition?

And keep yourself patient [by being] with those who call upon their Lord in the morning and the evening, seeking His countenance. And let not your eyes pass beyond them, desiring adornments of the worldly life, and do not obey one whose heart We have made heedless of Our remembrance and who follows his desire and whose affair is ever [in] neglect.

And a Message to those who reject the Qur’ān

And say, “The truth is from your Lord…”

So too should we say to those who would rather that we not live by the teachings of the Qur’ān:  the truth is from your Lord (with the object pronoun in the plural form), for Allāh is not just the God of the Muslims, but the Lord of all humanity (and also the Lord of the people of this nation that will be displaying these fragments to the rest of the world).

Allāh in the Qur’ān gives an ultimatum to humanity, warning of a severe punishment to those who reject or oppose its message and promising untold rewards for those who accept it. These are truths that Muslims often find difficult to convey to others, and that non-Muslims do not like to hear. But after the Qur’ān has been made manifest, there is little excuse left for humanity but to come to terms with this Book. So let the Qur’ān say it as it is, and let each individual make a choice:

Indeed, We have prepared for the wrongdoers a fire whose walls will surround them. And if they call for relief, they will be relieved with water like murky oil, which scalds [their] faces. Wretched is the drink, and evil is the resting place.

Indeed, those who have believed and done righteous deeds – indeed, We will not allow to be lost the reward of any who did well in deeds.

Those will have gardens of perpetual residence; beneath them rivers will flow. They will be adorned therein with bracelets of gold and will wear green garments of fine silk and brocade, reclining therein on adorned couches. Excellent is the reward, and good is the resting place.