Living with the Guardians of Jerusalem 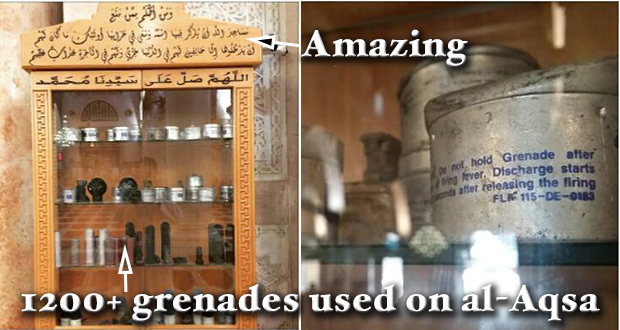 Living with the Guardians of Jerusalem

Alḥamdulillāh, praise is due to Allāh who recently blessed me with the opportunity to travel to Palestine and pray in Masjid al-Aqsa. What I found there made me realise not only the quality and calibre of individuals there that would lay down their lives to protect the sanctuary, but why we Muslims everywhere else in the world, owe a great debt to them.

In this article, I hope to relay some reflections from my journey and experience. 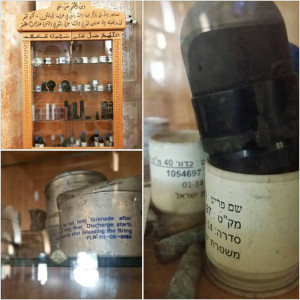 A cabinet from inside Masjid Qibli in Al-Aqsa sanctuary sampling some of the 1200+ grenades used on Al-Aqsa by the Israelis.
The Ayah written on the cabinet reads:

“And who are more unjust than those who prevent the name of Allah from being mentioned in His mosques and strive toward their destruction. It is not for them to enter them except in fear. For them in this world is disgrace, and they will have in the Hereafter a great punishment.”

The Palestinian people are blessed in every sense of the word; they are distinct from many Muslims I have seen from around the world. They are a people who have grown up seeing their land pillaged alongside constant betrayal from Muslims, neighbours and friends alike. The Palestinians have been fulfilling a Fard Kifaya (collective obligation) on behalf of the entire Muslim population by residing and standing guard in the Holy Land for over 65 years with barely any support or assistance. Despite our neglect, I found the Palestinian people to be the most hospitable I have ever seen. Almost every Palestinian family who spoke to us for more than five minutes was eager to invite us to their house even if they were extremely poor!

If you want to learn hospitality, go to Palestine.

Upon seeing the Palestinians initially, one may think them to be deeply ‘secularised’. The dress code is very western, and a multitude of anti-Islamic practices are common amongst the lay people. However, once you get to know them you start realising their numerous challenges in practicing the religion and acquiring knowledge. For example, Islamic schools were banned from many years ago and Jerusalem has not even a single Islamic school. All the while growing your beard or being a regular goer to the Masjid could land you behind bars!

I learned this all too well after being stopped at checkpoints and being called ‘Daesh’ (or ISIS) by Muslims and Jews alike for simply wearing a beard!

However, despite the challenges, there is a blossoming new generation that loves Islām, a generation that does not live for itself but lives for Islām, fearless, who have relinquished their dependence on puppet-regimes and call out wholeheartedly to Allāh alone; a generation satiated with contentment and one that refuses to be humiliated; a generation who will turn the tides with Allāh’s permission.

The Palestinians love to meet Muslims from outside Palestine. But due to political reasons (of recognising Israel and the like), most Arab nations do not visit Palestine and thus most visitors are comprised of South Africans and a few Britons annually.

Many saw the pictures from al-Aqsa on the 27th Night where it accommodated a record number of worshippers. According to some reports, up to 800,000 came to pray that night due to some lifted restrictions. But this seldom reflects reality. A typical Fajr Salāh (dawn prayer) outside of Ramaḍān barely has 100 attendees. The reason for this is that people from the occupied West Bank are restricted from entering and only Muslims from Jerusalem can attend as well as foreigners.

The fact is, however, many of us foreigners do not travel to al-Aqsa. It was easy to identify every foreign individual because of how few they were! To prove this phenomenon, I noticed a single family, a few brothers from the UK, an I’tikāf group of around 40 worshippers from South Africa, four Russians and around the same number of Malaysians as well as our group.

Due to the extremely low numbers throughout the year, the Israelis find it very easy to pester and take advantage of al-Aqsa and its protectors. We, as Muslims in the West, holders of the ‘red book’, have a particular duty to travel to this land to pray in Masjid al-Aqsa whilst providing whatever moral support and confidence for the people of al-Aqsa that we can. The worst that can happen is that we are asked a few frustrating questions, searched or rejected. On the other hand, there are Palestinians who live half an hour’s drive away who have never seen al-Aqsa! Many of whom are willing to risk imprisonment or death just to pray on these blessed lands. Let that sink in for a moment…

“You gave me hope and more faith in our Muslim brothers and sisters out there. Seriously we give you all respect as you have made al-Quds smile with your presence…” (A message delivered to us by a Palestinian brother on our visit.)

In the rural West Bank, we met many people who had never been to Masjid al-Aqsa despite living a stone’s-throw away. Many of these people had never seen non-Palestinian Muslims! Poverty was rife and above all these people felt neglected.

I will relate one particularly touching account of the local village Imām. This was a man who had spent months on end, frequenting a prison for no reason other than the fact that the youth had began to attend the Masājid regularly because of his Da’wah efforts. He sat us down and after being asked to speak in classical Arabic dialect, he reiterated a multiple number of Ḥadīths and verses from the Qur’ān pertaining to brotherhood and the concept of a single Ummah. On recalling his still imprisoned son, he burst out into tears. One of the brothers began reciting Qur’ān, comforting him with the promised victory of Allāh, shortly after which he dropped an eye-opening gem:

“Your hand (i.e. Presence) is worth more than your money.”

The Imām summed up the sentiments that resonate amongst the rejected and dejected in our Ummah in a single sentence. All too often we see images on TV of people suffering (particularly in Ramaḍān), to which our reactive instinct is to donate money (to absolve ourselves from a ‘feeling’ of duty). A bank transfer alone cannot heal these deep scars.

We need to look beyond Zakāh and charity as means of providing power to these people. We need a return to the Prophetic Sunnah and re-establish the human link between donor and recipient such that our hearts soften when surrendering our efforts and wealth whilst detaching ourselves from the Dunya. Moral support often actualises īmān and Islamic brotherhood taught to us by Prophet Muḥammad (sall Allāhu ʿalayhi wa sallam) far beyond our expectations.

Being in the company of those who translate knowledge to life was the underlying emotion, awakened by witnessing the love the Palestinians have for al-Aqsa.

On the 27th Night of Ramaḍān, I recall a conversation I had with a middle-aged man who had travelled from afar to pray in al-Aqsa. Upon asking him how he travelled, he calmly responded, “I climbed over the wall to be here.” He said this with a tranquil, composed demeanour. I assumed his 13 meter climb of a vertical concrete wall whilst risking being shot at by guards would provoke a more fiery response, but his achievement of reaching the blessed al-Aqsa Sanctuary overcame his own pains.

The Prophet (sall Allāhu ʿalayhi wa sallam) stated that a person whose heart is attached to the Masjid,[2] will be granted shade under Allāh’s throne, on a day where there will be no shade except His. Witnessing the love of al-Aqsa in the hearts of the Palestinians really and truly brought this ḥadīth to life for me.

The area of al-Aqsa is one in which the Palestinians hold with great pride. Their materialistic wealth may be little, their standard of life may be low in comparison to others, but their attachment to al-Aqsa is enough for them to be to be amongst the most content people I have seen in my life.

The Israelis have undeniably made life very difficult for the Palestinians. There is the apartheid wall which has literally split apart houses and families, then there are the constant travel restrictions preventing Palestinians from the West bank from entering Jerusalem and al-Aqsa without a permit. The Israelis have further restricted water supplies, forcing Palestinians to use water-tanks the cost of which is often extortionate,[3] all the while, Israeli settlers across the road enjoy fresh supplies and lavish swimming pools.

All of this comes in tandem with checkpoints and soldiers who (according to their ideology) view Palestinians as subhuman, wield guns, humiliate men and women and constantly incite reactions. One Palestinian relayed to us how the Israelis offered him 16 million USD for his house in the Old City, later increasing this to 20 million USD in the hope of increasing Jewish presence in Jerusalem, a story shared by many.

“This land does not belong to us, it belongs to all of the Muslims!”

Allāhu Akbar! So, on behalf of whom are the Palestinians struggling and resisting? It is time for us to take up our responsibilities towards them and to al-Aqsa before it is too late. Post Ramadān Allāh wants us to keep strong our brotherhood and relationship with those struggling and oppressed in the ummah, those who we remembered and claimed to care about so much in our du’ās in Ramadān.

May Allāh protect al-Aqsa and its people and forgive us for our neglect. May Allāh bring about a reviver from amongst us who will liberate al-Aqsa from the oppressors. But until then, let us increase our collective love for al-Aqsa and make the intention to at least visit it once if we are able.

[2] Bukhari and Muslim on the authority of Abu Hurairah