The Jihād of Job Hunting 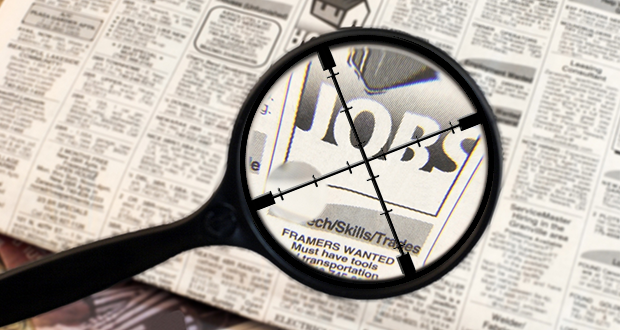 “Akhī, how can you go to a job interview with that beard?  Trim it down a bit.”

“Akhī, why are you being so extreme?  Just shake her hand during the interview; Islām makes exceptions for necessities, and this is definitely a necessity.”

“Akhī, why don’t you just ‘exaggerate’ a bit in your CV or when you are being interviewed?  You’re not lying, you’re just exaggerating a bit, and that’s acceptable, isn’t it?”

These are words I have heard many times on many different occasions, and I assume most people reading this have heard them, too. So, what’s the answer?  Alhamdulillāh, I am a brother who has been blessed with a beard, and I do not shake hands with women, so how did I deal with the above so-called “obstacles”? Let me tell you my story.

As a university student in this day in age, the main method of getting jobs is to apply while you are studying in your final year, or apply for a placement in your penultimate year, and this is exactly what I did.  I knew that job opportunities are scarce and competition is high, so I applied early to try to avoid any disappointment.  Because I live in London, I wanted to find a job in London so that I didn’t have to move out and live in a different city where Islām is not as widespread, and where I wouldn’t have any friends.  However, when I looked at the opportunities available, and the nature of my degree, I did realise that it might be difficult to get a job in London, so I made my first compromise in that I would accept job offers in the entire south of England.

When applying for jobs, I ensured that I didn’t lie on my CV, and when answering the competency questions, or participating in a phone interview, I also ensured that everything I said was true.  I won’t deny that in my first few interviews/answers to competency questions, there were some “exaggerations” from my part, but Alhamdulillāh I didn’t get those jobs, and I pray that Allāh will keep me steadfast in not doing this again.  When I got to my first final-stage job interview, which was for a job in Southampton, I received the usual comments and “advice” that I should trim/shave my beard, and shake hands with a female interviewer if she put her hand forward, but what stopped me from listening to this “advice” is that I knew that my sustenance comes from Allāh, so how can I get a job if I disobey Allāh in the process?  Even if I had gotten the job, how could I ever expect to have any barakah (blessing) in that job if I disobeyed Allāh in the process?

The first interview, as expected, didn’t go too well and I didn’t get the job.  My second interview was in Slough, and again I tried to maintain Islamic principles when attending the interview and not do anything that displeases Allāh, but again I was rejected.  Being rejected in the final stage of a recruitment process is very disheartening because it means you have already gone through all the previous stages of answering competency questions, phone interviews, et cetera, and fallen at the last hurdle.  What makes it even more annoying is when they tell you not to feel bad because you have been specially selected from hundreds, sometimes thousands, of people to attend the final stage.

Now that I had two rejections at the final stage of the recruitment process, my motivation was lowered and the ‘need’ for compromise began to hit me.  The compromise could be in my dīn (trim my beard, shake hands, and so on), or it could be in where I was willing to work.  Again, Allāh reminded me of the importance of abiding by His Guidance, and that only He controls my sustenance, so I made the second compromise: where I was willing to work.  Now I was looking anywhere within the UK.

My third final-stage interview was in Aberdeen.  It was a two-day assessment centre, and I was thinking how much of a waste it would feel if I went all the way to Aberdeen, stayed for two days, only to end up with a rejection. And guess what?  That’s exactly what happened.

All of the previous interviews I mentioned were in my penultimate year, when I was applying for a placement, and at the beginning of my final year I made my third compromise: I was now willing to work for any company in my sector, anywhere in the world.  So, I applied to over 50 companies!

As time went by, I got more and more rejections, including those in the final stage of the recruitment process.  The total number of companies that I was waiting to hear from was quickly decreasing, and so were my hopes of finding a job in my sector.  Despite all of that, I kept on reminding myself that Allāh is al-Razzāq, and that only He can provide for me, not my physical appearance, or my actions, and that is what kept me going.

As time went on, and I was coming closer to completing my degree without securing a job, I made my fourth compromise: I began to apply for teaching positions as the hopes of working in my sector were diminishing, and becoming a teacher would be my back-up option.  I then heard back from a company which I had previously applied to, and they invited me to attend a first-stage interview, and Alhamdulillāh, they then progressed me further to the final stage assessment centre based in Aberdeen.  Approaching the assessment centre, I was thinking to myself, “this is going to be another rejection; oh well, I’m used to it by now.”  Alhamdulillāh, the assessment centre went fine and at the end of it, I sat down with an HR representative so that he could give me feedback on how I had performed.

The feedback was good, Alhamdulillāh, and I was getting very excited; then came the killer question.  The question was: “It‘s physically visible that you are someone who practises his faith, so do you think it will affect you in any way if you are to work with us?”  A lot of things went through my head at that moment, but I decided that I would be honest in my answer and not hide anything, so I replied that it shouldn’t really affect me, except that I am not allowed to have any physical interactions with the opposite gender, hence I didn’t shake hands with the female interviewer.  We then had a long discussion on how I can best go round this issue without compromising my religion, or sounding rude to others.  After that, he said they would get back to me soon.

When I finished the assessment centre, I stayed behind a bit to wait for a brother I had met there to finish, and while I was waiting, a senior manager came to me and said, “You mentioned in your application form that you were president of a society in university—which society was that?”  I swallowed my anxiety and replied: “The Islamic Society.”

A week later, I received a call from the recruitment department saying that they wanted to offer me a place in their company.  I had attended many interviews before this one, and I met many companies, but subhānAllāh, out of all the companies I interacted with, this one was the one I felt closest to.  And guess where the job was?  London, Alhamdulillāh.

Looking back at what I had gone through and what I did, now I really appreciate and understand that Allāh is the One who provides for me, and that if the whole world goes against me, but Allāh is by my side, then I will surely succeed.  Who would have thought that being open and frank about my requirements and my belief would actually help in getting me the job?  As Allāh says in the Qur’ān,

During my application process, I made many compromises, but Allāh helped me to ensure that none of those compromises were in regards to the dīn, and subhānAllāh, I was rewarded with a job that I could have never dreamed of getting.  Out of the over 50 companies I applied to, only two were in London, and this was the only one in central London, but because Allāh is the One who controls everything, including my sustenance, He provided me with the best job out of all of the ones I applied to.

I want to use my story as a reassurance and as a message to everyone who is struggling to abide by the commands of Allāh that you should keep steadfast and remember that Allāh is al-‘Alīm (the all-Knowing), al-Qādir (the Most Able), al-Razzāq (the Sustainer) and al-Qahhār (the Irresistible).  Don’t ever think that if you make a small compromise in your dīn that you will be successful, because when you make that compromise, you are reducing your reliance on Allāh and relying on something else.  How can we expect something else we are relying on to be of greater help than Allāh?

Whenever you are faced with a hardship or a tough decision, remember Allāh’s words in the Qur’ān:

“…And whoever fears Allāh, He will make for him a way out.  And will provide for him from where he could never imagine.  And whoever relies upon Allāh – then He is sufficient for him. Indeed, Allāh will accomplish His purpose.  Allāh has already set for everything a [decreed] extent.”[2]