The Hypocrisy of the “Muslim School Takeover Plot” That Never Was 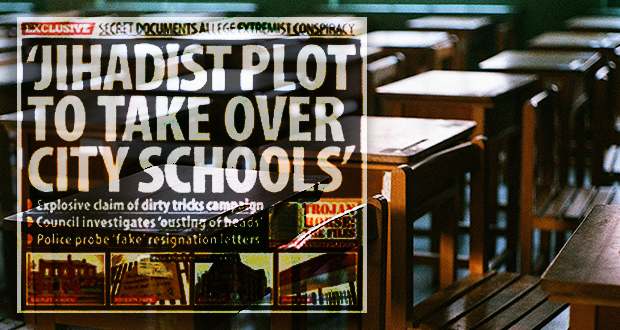 The Muslim takeover of schools was almost complete, all the pieces were in place, years of painstaking planning were about to pay off, yet at the eleventh hour the whole plan was scuppered when the secret masterplan was leaked, pulling the proverbial rug from underneath our very feet. Epic fail! Back to the drawing board!

It may seem like a mediocre storyline from a Spooks episode that failed to make the cut, but over the past few weeks the headlines seem to back up the claims. Or do they?

In early March, allegations began to surface of a plan, purportedly by ‘hard-line Muslims’ (is there any other kind?) to change schools into faith schools under the leadership of Muslim head teachers. The plan, codenamed ‘Operation Trojan Horse’[1], called for an end to illicit Sex and Relationship Education (SRE) classes, putting a stop to the teaching of homosexuality, ditching Christian prayers and mixed swimming

lessons. The strategy called for the replacement of existing governing bodies with Muslim governors and a coordinated plan to ensure parents created as much noise as possible to wear down school heads. One Muslim named in the document made it very clear the document was a hoax and any reference to him in the document was “a malicious fabrication” and included a number of inconsistencies and inaccuracies.[2] It is interesting that Birmingham City Council’s initial response was to claim they were investigating the allegations[3], despite the fact that the document was in their hands as early as November 2013. It is also surprising that the assistant principal of one of the schools at the centre of the claims was told by council officials they believed the document was a “malicious hoax” when the allegations surfaced but they would not come out publicly with this revelation.[4]

The ‘Trojan Horse’ document leaked to the press was full of more holes than Swiss cheese and it left just as bitter a taste in the mouths of many of us used to the kind of sensationalism that has characterised the reporting of matters pertaining to Muslim communities.[5]

That did not stop inspectors from visiting ‘suspect’ schools and by all accounts asking leading questions and building their evidence of an extremist takeover of Birmingham schools based upon selective information[6]. It seemed to many that whenever allegations are made against Muslims, the response acknowledges the veracity of the claims even before they have been proven. In one case the media were informed that an academy would be placed in special measures even before the report was published[7].

The poisoned narrative that the media reporting bolsters suggests that Muslims are plotting a takeover, deploying such cunning and guile, that even Sherlock’s arch nemesis Moriarty would turn green with envy. Yet such a simplistic notion relies on Muslim determination, coordination, strategic know-how and a huge smattering of patience—attributes which are unfortunately absent amongst Muslims to the extent that such a bold plan requires.

Who benefits from this gift that keeps on giving? For newspapers, these stories act as the main staple for a readership that want to gorge themselves on stories that prove what they already know to be true. So when sensationalist headlines scream “Muslim takeover!!”, this resonates with the average reader who wants ‘evidence’ for his deeply held ‘views’ rather than for prejudices to be challenged.

The widespread narrative that has penetrated the public consciousness, to varying degrees, suggests that Muslims are utilising any and every means, foul and fair, to change ‘our way of life’, with a mixture of taqiyya and political correctness to ensure success. Yet some newspapers are infamous for not allowing the truth to get in the way of a good story and ‘extremist’ Muslim parents pressuring schools, with secret documents, personal anecdotes and hearsay, as well as concern from the very heart of government, are key ingredients for any scandalous editor’s dream. Boys will be boys, and lazy journalists will sensationalise.

I have supported parents concerned with the way some schools teach Sex and Relationship Education (SRE) over the past four and a half years, including parents in Birmingham. During this time I have met and spoken to thousands of Muslim parents, I have only ever come across parents concerned with the education of their children in the most holistic sense. They do not use this or any other issue to pursue a hidden agenda and it is important to stress, they do not ask for special treatment. Guidance from the government clarifies that teaching in this area has to be in line with parents’ wishes and the culture of the community the school serves. Any decent school which prizes its relationship with parents will seek to include the views of parents in decision-making. This is so important that the new Ofsted framework requires that schools have strategies in place to engage parents to achieve successful outcomes for pupils—without this a school cannot be graded ‘outstanding’. If parents do not want SRE to be taught in a school and convince the governing body, it can decide not to teach it beyond the statutory science elements. Despite the fact that the law is on their side, the headlines may still scream “Muslim parents enforce Islamic values in a school”.

Liberal-minded parents may convince a school to change the way a particular part of the curriculum is taught, influence the choice of Modern Foreign Language (MFL) or even arrange an educational trip to a foreign country.  If Muslim parents in a state school, however, comprising close to 100% Muslim pupils opt for Arabic to be taught, a prayer room established, a change to the uniform policy to accommodate the Islamic dress code or plan a foreign trip to Makkah, we are told this is a “Muslim takeover” and the Department for Education and Ofsted call for an investigation.  The problem is the mere mention of ‘extremism’.  An ill-defined, catch-all word is used to paralyse Muslims and force us to self-censor in a way other communities are not made to do.  A few years ago when a group of east London parents were at loggerheads with a primary school, which had decided to teach about homosexual relationships under the guise of fighting homophobic bullying, the local authority monitored the situation under the remit of assessing extremism.  When David Cameron recently visited Birmingham he was adamant there was “no place for extremism in schools”[8].  By making such a statement, which includes a sensationalist term which people choose to define as they please, it gives credence to the allegations.

So when are legitimate concerns of Muslim parents considered the first step in a nefarious plan to change a school into an Islamic school?  A lot of the concerns of Muslim parents stem from the fact that far too many schools expect our children to surrender a pivotal strand of their identity—their Islam—at the gates.  Whilst other strands of a child’s identity are catered for, including the recent push for children to be afforded acceptance of their sexual orientation, Muslim parents are often told by schools when they request changes to reflect their child’s faith belonging, “if you don’t like it here you can always send your child to a Muslim school.”

The biggest casualty in this mess will be Muslim parents who will, in future, think twice about pursuing a legitimate issue with schools for fear of being accused of seeking to engineer an extremist takeover.  It is not inconceivable that unscrupulous schools could bank on this to ensure parents toe the line. Despite this we have to think and act from the firm basis that these are our schools and as parents we have a stake in them.  No doubt, most schools do an excellent job but that must not mean we do not get involved in schools, celebrate their successes, give credit where it’s due, but also intervene to ensure our voices are heard when it matters.