#VisitMyMosque Day shows we have much work to do 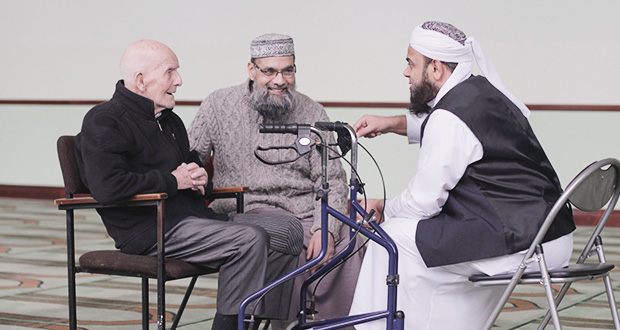 In light of the uproar caused by Donald Trump’s “Muslim Ban”, thousands of Britons had the opportunity to see the true face of Islam and Muslims in the UK on Sunday 5th February. 150 mosques across the UK welcomed in their neighbours from all backgrounds for #VisitMyMosque Day.

Visit My Mosque Day aims to

The objective of fostering a better understanding of Islam is ever more needed in today’s climate of rising Islamophobia and fake news. As well as explaining the foundations of Islam, the daily prayers and the influence of Islam on a Muslim’s everyday life, the mosques took the opportunity to demonstrate the role of Muslims in society by highlighting the community-related endeavours mosques embark on including distributing food, offering shelter to the homeless and giving aid to displaced refugees.

“As the world recoils at President Trump’s so called ‘Muslim Ban’ and the mass killing at a mosque in Canada, [Visit My Mosque day] is a much needed antidote to the poisonous atmosphere we find ourselves in,” said Harun Khan, secretary general of the Muslim Council of Britain. “The British public, Muslim and non-Muslim, have an opportunity to come together and renew bonds of friendship.”[1]

Unfortunately, for many non-Muslims, the only Islamic education they receive is through biased media and zealous anti-Islam propagandists. Exposure such as this is imperative in countering malicious narratives constantly pushed out. Visit My Mosque Day is an excellent platform by which to achieve this and it also serves to encourage Muslims to engage in such initiatives of community cohesion on more than just a single day of the year.

With the scores of attendees protesting the “Muslim Ban”, it is clear that there is a desire for tolerance, integration and solidarity with Muslims from people of other faiths.[2] The onus is on the Muslim community to reach out, to set an example and to embody the teachings of Islām to eradicate the misconceptions surrounding our dīn, to illustrate its beauty and to share its benefits.

Harun Khan elaborates on his hope of strengthening the bond between Muslims and the communities they belong to by reminding and encouraging Muslims to be proactive members of their communities.

“We Muslims should remind ourselves that we are at our best when we reach out, share our faith and welcome fellow citizens into our home.”[3]

This echoes the verse in which Allāh (subḥānahu wa taʿālā) says,

“Invite to the way of your Lord with wisdom and good instruction, and argue with them in a way that is best.”[4]

As ambassadors of Islām, we must rise above our fears and engage with our neighbours. We should be inviting others with wisdom, welcoming them into our communities and engaging with them with excellent character. In Shamāʾil al-Muḥammadiyyah by Imām Tirmidhī (raḥimahu Allāhu),[5] the Prophetic characteristic of perfect morals and manners is described.

“Whoever accompanied him and got to know him would love him…”

“Nearly 400 people attended the open day including teachers, journalists, councillors, police, neighbours, faith leaders, actors, children and others who came to our centre and made the day a great success and a source of inspiration. It was truly a humbling and inspiring day for me to meet so many people who came to show solidarity with Muslims, see their place of worship, how they worship and, at times, to see people crying, overwhelmed with their love and support for Muslims. The day was most definitely a #BridgesNotWalls day for us all.”

Since Sunday people have been contacting their local mosques and thanking them for the opportunity to learn about Muslims and Islam first hand. One of our regular authors, Shaikh Abu Rumaysah’s local mosque, Wycombe Islamic Society (WISE) shared some of the feedback they received:

“I would just like to say thank you so much for a wonderful visit – really interesting, and what a lovely, warm, hospitable welcome! (Plus the canapés were delicious). It was a privilege to meet you all. Thank you! xx” —Margo

“Thank you for inviting us to the open day at your Mosque. It was the first time that Matthew and I have ever been to a Mosque and found the visit very interesting. We were grateful to have been made to feel so very welcome by everyone we spoke to. Thank you again.” —Ruth

“This was a great event. Thank you so much to everyone at the mosque for organising and being so welcoming.” —Libby

“We really enjoyed our time at the Mosque this afternoon. Learned so much and have brought home lots to read too. Our little one is 3 so I expect we will be back so he can learn more as he gets older. Thank you! PS – he really enjoyed the cake.” —Helen

“My husband Ben is not on Facebook but just wanted to pass on that he really enjoyed visiting WISE mosque yesterday. Everyone was really welcoming, it was good to learn more about Islam and pleasing to find out about all the great charity work you’re doing as part of the community. Kind regards” —Tamsin

Reading messages of people wishing to take the initiative and learn about Islam first hand is heartening, however if we reflect past the initial reaction we will find a worrying reality. How many people are out there searching for the Guidance of their Creator? How many people are there sincerely looking for a way to fulfil the desire to glorify Allah that is embedded within their fitra (innate, natural disposition)? When we look at just a small sample of people who, instead of being satisfied with ignorance and illiteracy of Islam, take the initiative to learn for themselves from Muslims, we see that we have an immense responsibility before us as a community.

Watching some of the videos that have been shared on social media of people watching Muslims pray, it struck me that many people were listening to the words of their Lord being recited for the very first time; words which they have a right over us to convey to them. We often get an incorrect impression from a small but vocal group of internet trolls and Islamophobes of all stripes and colours and often ignore the fact that there could be millions of people who sincerely wish to seek the truth. What will be our answer if that neighbour, colleague or classmate that walks past our local mosque everyday, comes up to us in the pandemonium of the Day of Judgement saying,

“I was your neighbour for 20 years…why didn’t you tell me about this?”

Upon us is not to change people’s hearts, but to simply and clearly show them and invite them to the truth. It is between them and Allah whether they are able to resist the propaganda, shubuhat (specious arguments) and ephemeral whims and desires that stand between them and Islam. Regardless of whose heart Allah opens towards the truth, it is clear that Sunday’s #VisitMyMosque Day must only be the beginning.